It’s beeeeen aaaaa loooooong tiiiiiiiiime. Since the last blog (not entirely shocking) and also since the last time I ate kimchi mandu until my pants got too tight. In fact, the last time may have been the early 2000’s, when said pants were considerably smaller in size, and social media consisted of Mark Zuckerberg rating hot girls at Harvard. Oh, how the pants and the times have changed! The good news for me is I’ve finally broken down and given into jeggings which are almost as comfy as maternity jeans. And the good news for Mark Zuckerberg is he’s a GAZILLIONAIRE, it’s just too bad about the whole Facebook dismantling world democracies thing. Anyhoo. Dumplings! 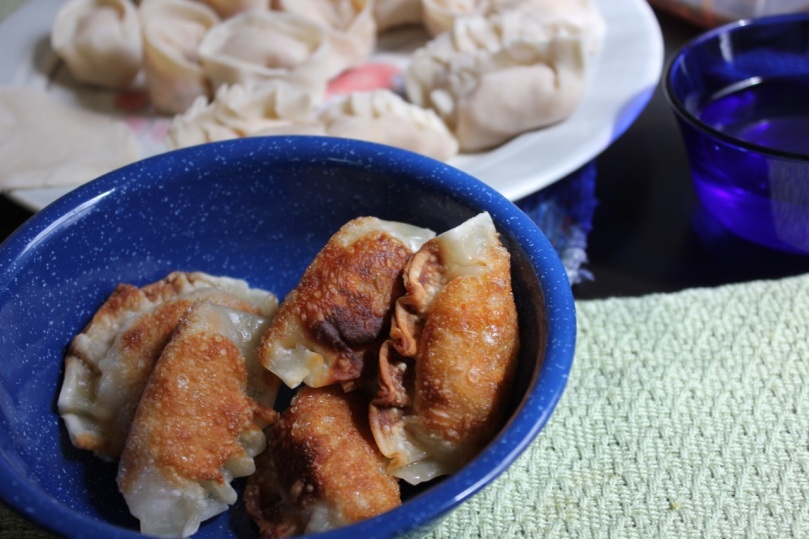 Didi and I both taught in South Korea yeeeeears ago, before Instagram was invented, so we’re not even sure if we’ve actually been there. But for the sake of this post, let’s say we were. Not together, a few years apart, but we both fell in love with kimchi mandu. Didi with the fried version up in Seoul and me with the steamed ones a bit further south in Daegu. If you’ve never had mandu, you may have had a version of them – think Japanese gyoza or Chinese dumplings – but in mandu the pork is mixed with kimchi. Which you won’t like the first time you try, but then will become obsessed with, until you’re eating it on scrambled eggs, in a grilled cheese, or as a condiment on hotdogs like I do. If you are a super star who really has it together in life, you can make it yourself! Or buy it in a jar from Sobeys like I do, because I just got my kid’s first baby picture framed and he is three and a half years old.

Didi had a package of dumpling wrappers in her freezer and we’d been talking about getting together for ages to make a giant pile of mandu, a project that would be too daunting (or boring, mostly) to do by oneself. Not that I haven’t been known to tackle a giant food project on a snow day, half a bottle of Chardonnay at my side, hours stretched out in front me like a good pizza dough. But then I had a kid. Now, snow days mean no day drinking (well…) and lots of praying to the kitchen gods for patience when my toddler doesn’t get how an extra teaspoon of baking soda will ruin the cookies, or how that cup full of dirty dish water he’s playing with won’t make the cake batter taste better. Like, what is his problem. Anyway, even though it wasn’t a snow day, when my mother-in-law Florence offered to watch Jude for the afternoon so I could have a proper cooking date, I ran away faster than Jason Kenney runs from an Alberta forest fire, or Andrew Scheer when he sees a gay pride parade. Hahahaha ok, yeah no, I’m definitely not THAT fast.

I showed up at Didi’s, breathless with excitement, thrilled at the prospect of not having to wrangle my child with hands covered in raw pork, and asked her, “Do you need to change your garbage? It smells in here.” Didi: “That’s the kimchi!” See? It’s a bit smelly. In Korea everyone has a regular fridge, and a mini kimchi fridge so it ferments just right and doesn’t stink out the rest of your food. But it’s so tasty. And healthy! According to Koreans, it’s the reason they didn’t all get SARS and bird flu back in the day. What? Stranger things have happened. Look at Boris Johnson. 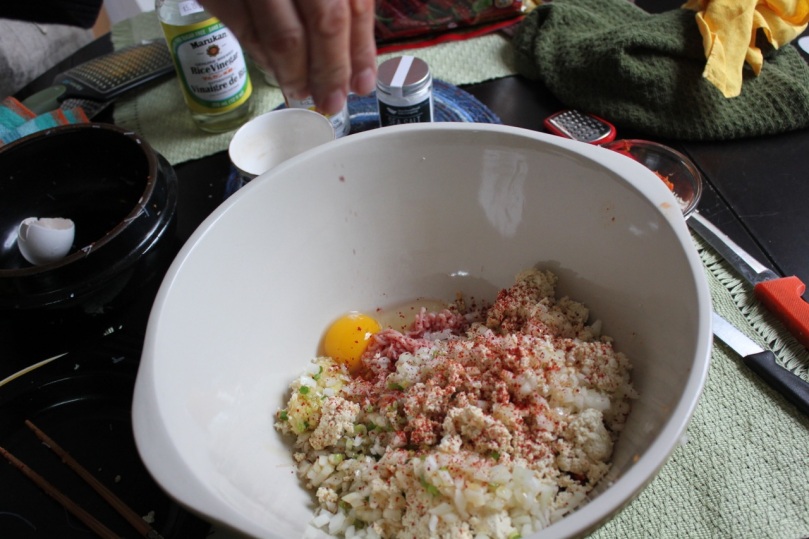 This recipe is one we cobbled together with some guidance from the interwebs, our own personal preferences, and the advice of the lovely woman who works down at the So Kee grocery on Duckworth Street. You can go a bit loosey goosey with ingredients depending on how garlicky/salty/kimchi-y you like things, but be mindful of water content and the fact that you can’t really season to taste because of the raw pork. I mean, you could? Bit risky. Kinda like going to a costume party with Justin Trudeau.

Combine all ingredients except wrappers in a large bowl, using your hands to mix. With clean, dry hands, place a wrapper in the middle of your palm and add about a teaspoon of filling. Dip your finger in the bowl of water and lightly wet the edges of the dumpling before sealing. Keep dumplings on a clean, non-stick surface until ready to cook. To pan fry dumplings, put some oil in a well-heated pan and brown them on one side, before adding enough water to cover the bottom of the pan and covering to steam for five minutes. The dumplings should be done when the water has evaporated. Add a bit more oil if you want to brown them on the other side, and make them extra crispy. To steam, place dumplings on parchment paper in a steamer and steam over boiling water for fifteen to twenty minutes. Serve with a Korean or Japanese dumpling sauce on the side. 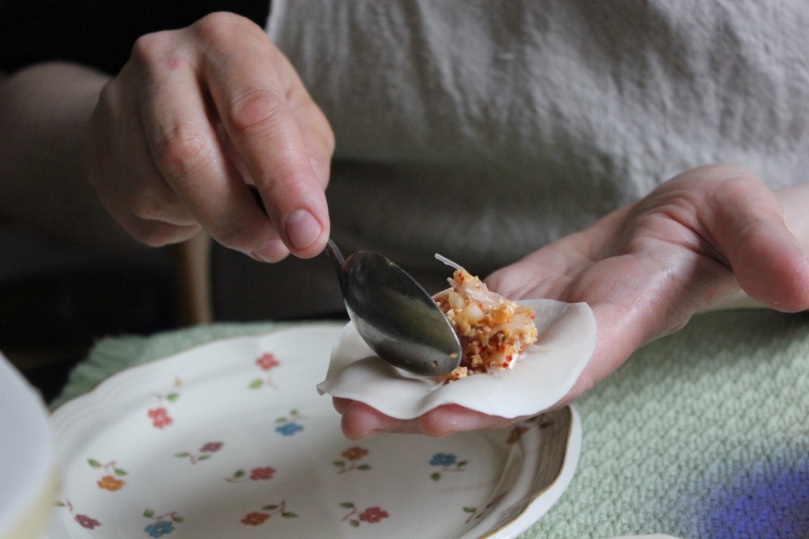 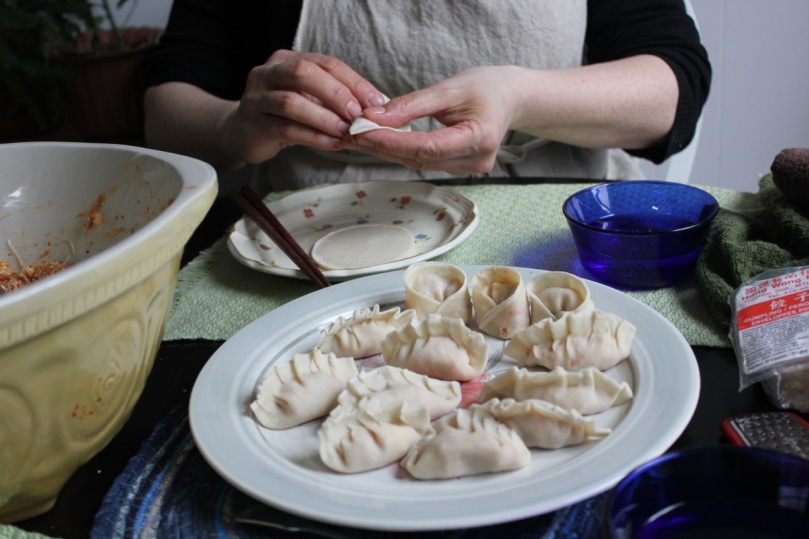 A few quick notes to keep in mind…don’t overstuff your dumplings! This will make sealing difficult, and they might burst during cooking. They’ll still taste good, but look messy and be harder to cook. Sealing and folding dumplings is a bit of an art form, so be patient and know that if you haven’t done it before, the first few will look stupid and you will want to cry, or maybe that was just me. There are a few ways to do them, and numerous tutorials online, but we stuck with the seal-and-fold and the tortellini style. The folded style are easier to pan fry, and the tortellini shapes are good for steaming, but they’ll turn out great either way as long as they’re sealed well and not overstuffed. Like how you’ll be after you can’t stop eating them because they are delicious and you will feel like a goddamn superhero after finally making them like you said you would seven years ago. Or maybe that was just me. And sauce is easy. Bit of soya sauce, rice vinegar, grated ginger and garlic, and chillies and sesame oil if you like. Chopsticks optional, fingers fine. These will disappear in a crowd, if you’re that kind of person who does things like make homemade dumplings for a dinner party, and frame pictures of your children before they go to kindergarten. Or you can freeze a bunch to cook for later because honestly, these are so good it was hard enough to share with Didi. You will definitely want to hoard them. Just be sure the pork wasn’t previously frozen, and if it was, cook the dumplings first, then freeze. Safety first! For pork, and for Halloween costumes. If you’re having any doubts, DON’T DO IT. 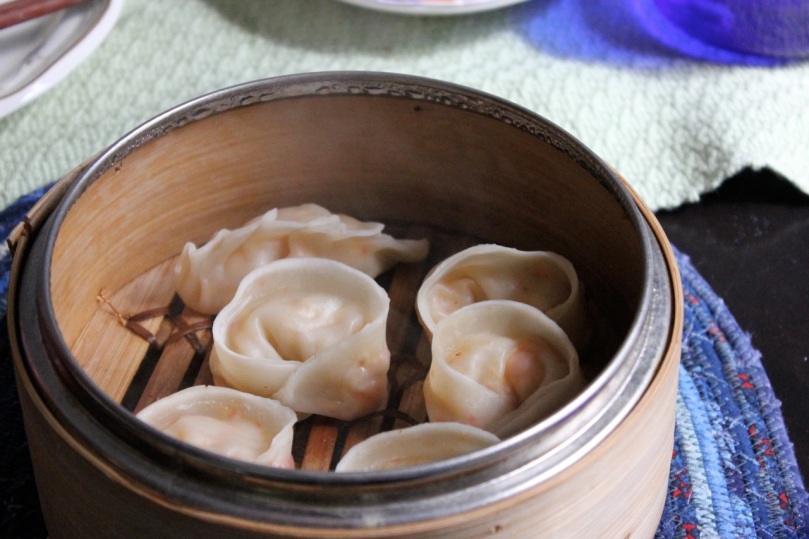 5 thoughts on “Hello Dumplin’. Nice to See You.”