I’ve come to put you on again!  Because it’s winter!  And that means three pretty fantastic things:

1- Getting your softpants out for the season

2- Lots of braising, stewing, and currying

3- And (this one’s for the ladies, or guys who are cyclists, whatever) not having to be so diligent about shaving your legs. Unless your fella’s weird about that stuff in which case massive eye roll and tell him good luck getting someone to cut his toenails in his old age with an attitude like that.

Just to be sure no one took that as enthusiasm, I hate winter. Until I can live in Switzerland and do nothing but drink hot chocolate and take long hot baths after a day on the slopes with Tina Turner, I’m having none of it. It’s gotten so bad I can’t even enjoy a perfectly warm summer’s day. I focus so much on trying to enjoy the heat while it lasts I can’t even enjoy the heat while it’s there. Isn’t that an awful way to live?

I’m sitting here trying to think of good things about winter and the only thing I can come up with is food. Snow days? I guess so. If you’re a kid or a teacher and get to stay home. But then you still need to shovel the car out to get to the liquor store. And as we learned the hard way last weekend, snow days in Newfoundland now mean no power, no heat, no cooking and NO BOOZE. I’ll tell you something, my goddamn 72 hour emergency preparedness kit now contains a hell of a lot more than batteries. Let’s just say Jack Daniel and the pink Energizer bunny are keeping each other company in a box in the basement. Winter walks? Yeah, no. A winter walk around sidewalk-less St. John’s is like hiking to Everest base camp. Except swap the altitude sickness with pickup drivers giving you the finger. Christmas? Ha! Definitely not. What’s so great about the only time of year grocery stores run out of cream cheese and bacon? Absolutely nothing, I say.

That leaves us with one thing. DUMPLINGS.

So, former holiday revellers, here’s a recipe to cheer you now that the joy of Christmas has worn off and we’ve been plunged into the despair of January and February. Followed by March, April, May. Maybe June. Well, that’s depressing now, isn’t it? Time for a safety drill and a visit downstairs to see the bunny and Jack. Or just Jack. SAFETY FIRST. 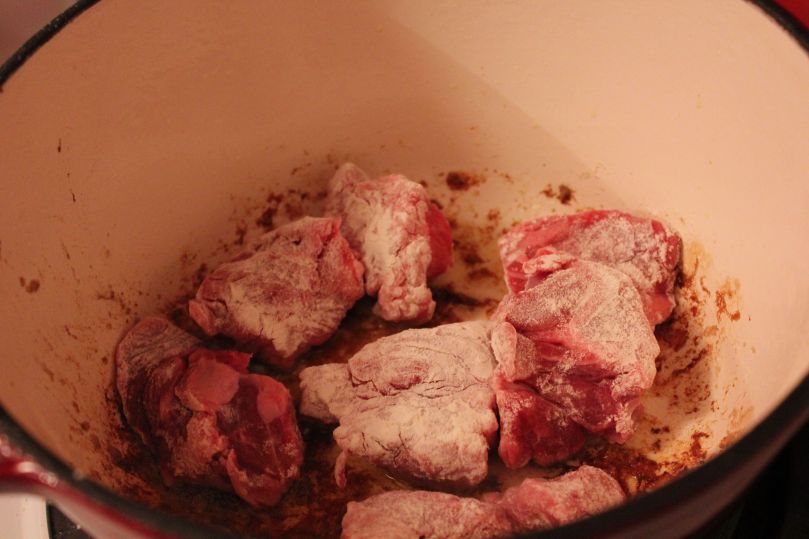 Rachel Khoo is my new food hero. Anyone who can cook food this good in a kitchen that small looking as fabulous as she does deserves the Nobel Prize for cooking (could we get on that please). Her TV series and cookbook, The Little Paris Kitchen, was introduced to me by my friend Nancy, who thought that Rachel’s little Paris kitchen was like my little red one. With two notable exceptions, of course. Rachel’s flat is in some unbearably chic district of Paris and my house is in a district where pyjama pants are the heights of fashion. Exception two – Rachel cooks in polka dot dresses and I’m lucky to get myself into jeans and a turtleneck on the best of days. I usually look like the people walking around the neighbourhood.

Yes, I said turtleneck. They’re classic, like Chanel dresses, and they keep you warm when you can’t afford to blast the heat in January. Jeez, it’s not like I wear Crocs.

There’s always been something very intimidating about Beef Bourguignon to me. Mostly, it’s trying to spell the word Bourguignon. It conjures up images of fine wines, cuts of meat I know nothing about, and being yelled at by French people. Let’s face it. If you had to cook a meal in front of Jamie Oliver and you messed up, you’d both have a laugh, crack open a beer, and order a pizza. If you screwed up in front of Guillaume Brahimi, you’d probably be challenged to a duel at dawn with actual swords and shit. Oh, I kid. But that’s how I feel about French food and that’s how much it intimidates me. Which always means my admiration is equal to my intimidation. It’s so simple and beautiful, but unless you nail the simplicity and beauty, you’re done for. At dawn. With swords. That’s why I love Rachel’s cookbook. She strips away all the fear of cooking French food, and isn’t afraid to put her own twist on a classic recipe. She’s not precious about it, she’s fearless and she just does it. The fact that she’s not from France makes the book less intimidating for me, somehow. But what do I know. I wear turtlenecks and drink Jack Daniel’s in my basement. Just try this recipe and get her book if you’re easily scared away like I am.

(This recipe is also a shout out to the sweet kitchen that housed me for five years. It’s one of the last winter meals I made in it before moving in with someone who was willing to make room for me and my turtlenecks. The little red kitchen is now trying yellow on for size, and taking care of a sweet little family. Boyfriend and I are now in paint colour negotiations because this kitchen is like cooking inside a giant armadillo, and The Little Greyish Green Chicken is just not working for me.) 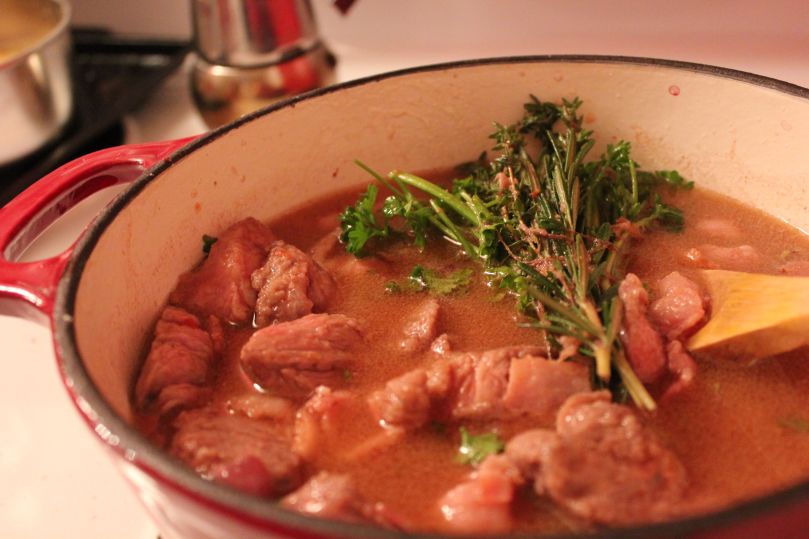 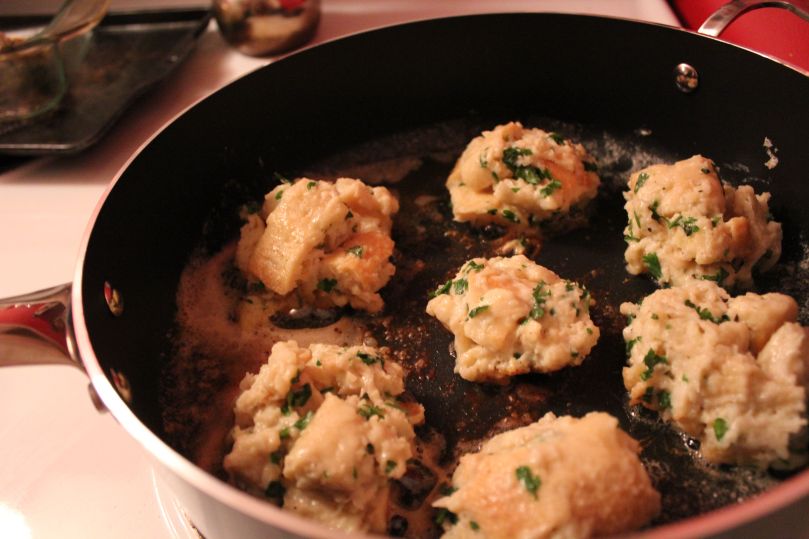 200g stale baguette or other bread (crust included)
250ml milk
a pinch of nutmeg
salt and pepper
a handful of chopped parsley
1 egg
1-2 tbsp plain flour
a nub of butter, for frying 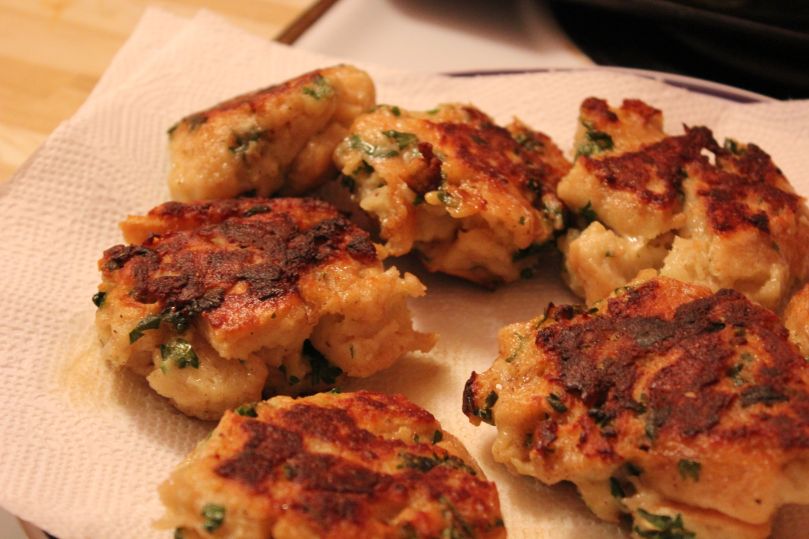 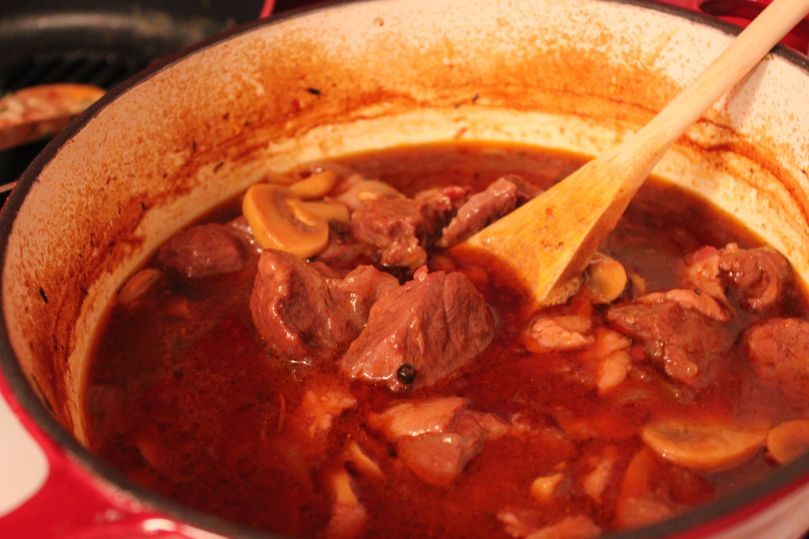 Preheat the oven to 150ºC (around 300ºF). Dust each piece of meat with flour. Heat the oil in a large casserole over a high heat and fry the meat in batches until browned. Remove each batch, then fry the lardons, onions, garlic, herbs and spices in the same pan until golden brown. Return the meat to the pan and add the wine, water, tomato paste and sugar. Scrape up the caramelized bits – they will add flavour. Cover, place in the oven and cook for 3 hours or until the meat is tender and almost falling apart.

Cut the baguette into small cubes and place in a bowl. Bring the milk to a boil and pour over. Stir so that the milk is absorbed evenly, then cover and leave for 15 minutes. Season with nutmeg, salt and pepper, stir in the chopped parsley and egg, and mix in 1 tablespoon flour. If the mix is too wet (it should be moist and only slightly sticky), add a second spoon of flour. Wet your hands a little to help stop the dough sticking to them, then make 12-14 dumplings (smaller than a golf ball).

About 20 minutes before the stew is ready, add the mushrooms and season with salt to taste. Heat a knob of butter in a large frying pan and fry the dumplings on a medium heat for 5 minutes or until golden brown and crisp, then drain. Garnish the stew with parsley and serve with the dumplings. 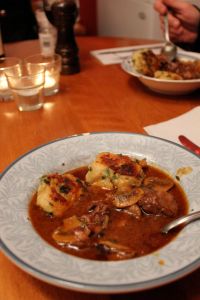 Besides replacing the lardons with a few strips of bacon and omitting the cloves, I followed the recipe to a tee and it was dreamy. And easy! And no one showed up at my door to challenge me to a duel. Turns out the meat I thought I knew nothing about was just a pack of stewing beef that I bought at Sobeys on sale. This is great with moose too, especially if you have no idea what cuts your uncle gave you and it’s just sitting in your deepfreeze, waiting to be loved. Braising, man. It’s just the best. The meat goes in the oven and you can forget about it for three hours. But not really, because the smell of this stuff in the house is really something else. The dumplings take no time at all and they’re fine to make right before the stew comes out of the oven. I can’t imagine it would be a big deal to make them earlier and then gently warm them up in the oven or a frying pan before serving. I made a bouquet garni with the parsley stalks, rosemary and thyme…I had to improvise butcher’s twine and use a piece of thread, and that turned out ok. While trying to google “can I use thread instead of butcher’s twine”, I learned that a top search is “can I use Polysporin on my dog” so there’s a fun-on-the-farm fact that only I would manage to come across while making Beef Bourguignon (and yes you can, if it’s not too serious).

Here’s Rachel making the dish in her little Paris kitchen, in case you were looking to make yourself feel terribly unfashionable and very unadorable. 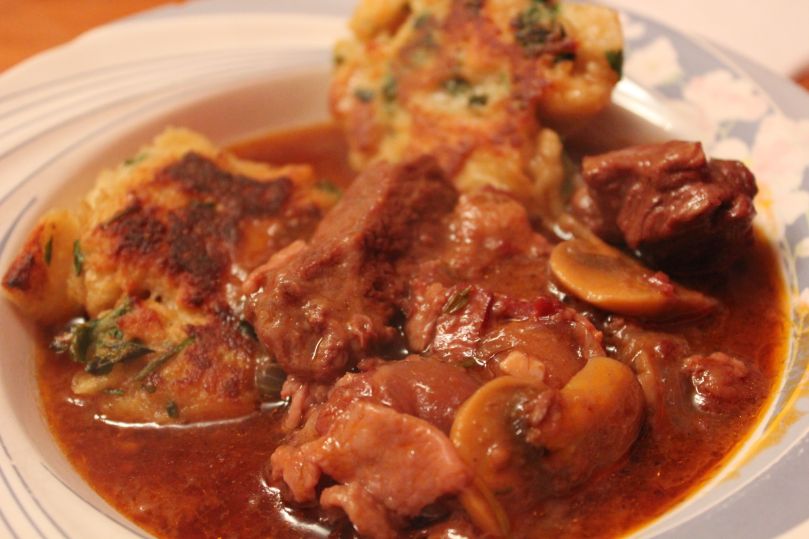 Food won’t fix winter. Food won’t shovel your driveway or pick you up after you’ve slipped on the ice. But eating a bowl of stew and dumplings will make you feel safe and warm when there’s a blizzard outside. And hey, who knows, maybe if we all bring a few pots of stew and a tray of cookies down to city hall for the next council meeting, we can convince the guys to get a few of our sidewalks plowed. If not, we’ll challenge them to duels.