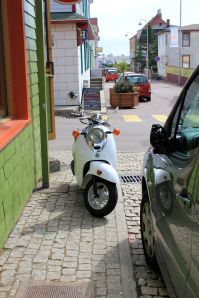 My first honest-to-goodness lavish eating experience was in France when I was sixteen. I had never been overseas before, and it was one of those chaperoned jobbies where I spent a week on a bus with a bunch of American teenagers and then we all separated to spend three weeks with a host family. I hit the jackpot with my placement; a lovely upper middle class family in Toulon on the Mediterranean with a pool and a sailboat. They were so quintessentially Southern France I thought they would kick me out of their house as soon as they saw how fast I sunburned. They oozed glamour out of their pores. They took me on sailing trips and gave me French Champagne on my seventeenth birthday. Everyone smoked and looked like movie stars when they did it. The older sister, Delphine was nineteen and generally wanted nothing to do with me, but sometimes she’d drive me around in her jeep so she could practice her English. She looked like Brigitte Bardot and I was in love with her. Not in a sexually confused way, more like a I-want-to-be-you-so-bad-I-could-die sort of way. The parents, Guy and Martine, let me and my other host sister Charlotte have pool parties when they went to work. They’d leave the liquor cabinet open and a bunch of Charlotte’s pals would come over. Everyone was tanned and beautiful and would greet each other with kisses on the cheeks then go topless while I sat poolside in my Northern Reflections t-shirt and burned with Catholic shame.

So I didn’t quite learn to loosen up that summer, but I did have a lot of formative food experiences. I was shocked to learn how good ripe peaches were, and that the juice did in fact run down your arm when you bit into one. I ate more fresh fruit and vegetables in those three weeks than I ate in one year back home in Labrador. One night Martine and Guy had a fancy dinner party and my job was to peel the avocados. I had never seen one in my life and couldn’t believe no one had ever told me there was an oily vegetable (fruit?) that you could put a knife through like butter. Besides the one day it rained, we ate supper outside every single evening. 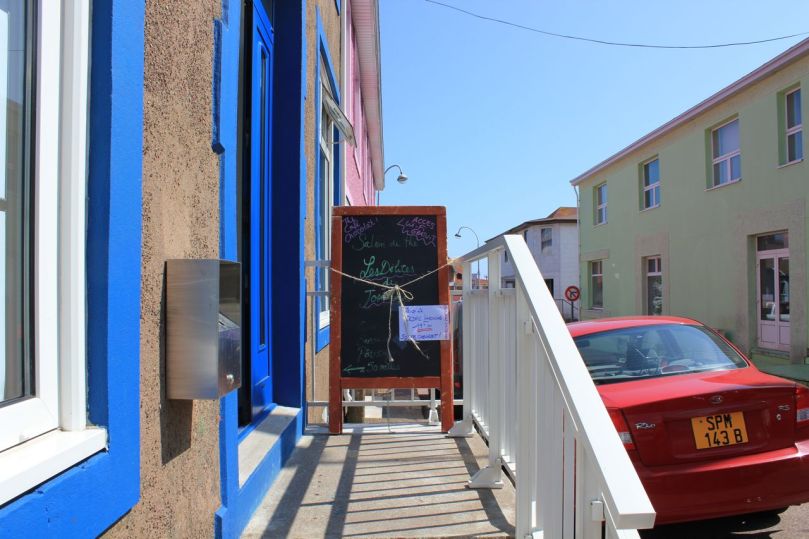 Everyone has thought of running off to France to live at one point or another and I’m no exception. It comes up often when I play the “When I Win an Obnoxious Amount of Money” game. I’ll have a big beautiful house on the Mediterranean with a yard full of cypress trees and all the fresh peaches I can eat. In reality, the last time I was in France I was backpacking and booked a bunk at the “Aloha Hostel” (that should have been my first warning) in Paris. I didn’t see a pillow on my bed and when I went to the front desk to inquire I was yelled at with an emphatic “WEE DUN’T ‘AVE PEELOWS”. It’s a good thing there were fresh baguettes and stupidly good coffee for breakfast, otherwise I might have walked away with a bad impression of Parisians.

The whole embarrassing point to this story (more embarrassing than the Northern Reflections t-shirt…it was fuchsia) is that Newfoundland is so close to France it’s almost silly. So close all these years and I only made it to St. Pierre this past summer while I was on tour. Our day off happened to be in Fortune and we were a short drive from the ferry terminal. Let me tell you, this little trip to France was a well-needed mini vacation after a hellish couple of days on the road. My birthday had been two days earlier and the celebrations included a five hour drive from Grand Falls to the Burin Peninsula, getting drunk by myself at a dinner theatre, and staying at a moldy B&B being run by a couple more suited to running a prison camp. They hated each other, they hated us, and they were drunk. Well so was I when I got locked out in the cold that night, but it was my birthday and I was allowed. Hi Nan.

A cold and grey day on the ferry, but not so bad. I was just glad to be out of the moldy house where people yelled at us. The minute we docked the fog cleared, the sun came out, and it was like some little French cheruby angels flew a banner across the sky that read, “Welcome! We’re sorry about your shitty birthday. We will make it today, non?” Oui! Bonne Fête to moi! I was functioning on three hours sleep but I kicked it into high gear. Dumped my bag at the Hotel Robert, grabbed my camera and took to the streets. Three months on the road in rural Newfoundland and all I wanted was a coffee that didn’t come from a gas station. Two espressos, one ham and cheese baguette and a chocolate croissant later and I started walking. Glad to be in the sun, out of the country, and full of the best food I’d eaten in months. I hung out by the lighthouse for a while and then backtracked to poke around in town a bit. I even found my own little red poulet… 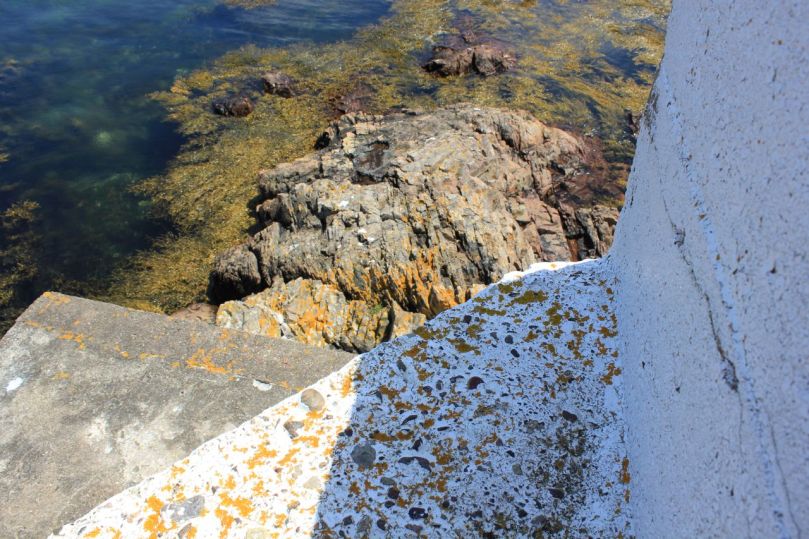 I made myself a promise when I went through customs that I wouldn’t be afraid to use my French. Turns out I’m pretty fearless when it comes to ordering food and even a language barrier won’t get in my way. I’d probably haul Mandarin out of my ass if I had to. A lot of folks speak English at the tourist spots, but I always tried to beat them to the punch and start in French, telling myself it might be a while before I could practice again. I managed to order a tarte au citron and a café noisette at Les Délices de Joséphine without passing out. And what the what, café noisette? How have I never known about you? Kids probably get one on their first day of Kindergarten in France and I had never tried one? I have a food blog? Jesus. Sometimes I embarrass myself. I definitely embarrassed myself by pretending to read a French Elle magazine and only looking at the pictures. 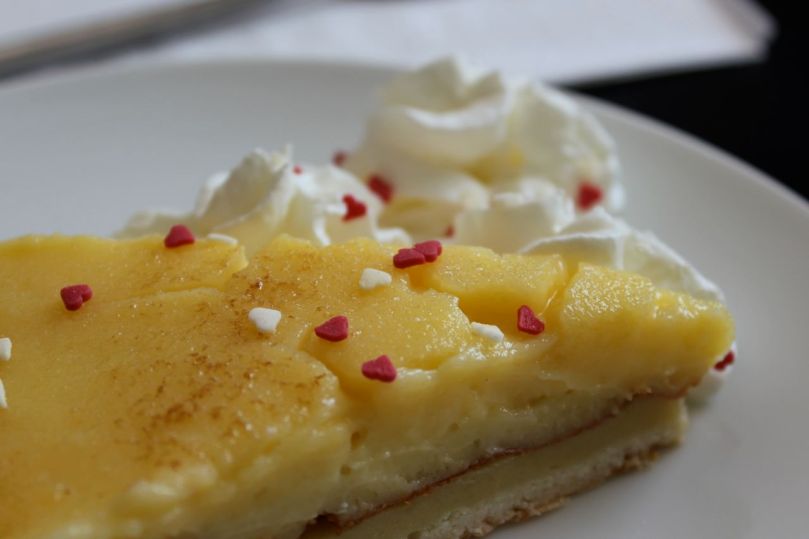 A belated birthday supper that night at Saveur des Isles with Didi and Darryl. Course after decadent course of what I can only explain as the exact polar opposite of every hot turkey sandwich I had eaten on tour. A prosciutto and melon salad with fried chèvre to start, lamb with pommes frites and two mousses for dessert. Or would it be two mousse for dessert, like two moose? I argued with Darryl about whether the frites were done in duck fat and if they were, I mean how hard would it be to get duck fat in Newfoundland? Why did St. Pierre and Miquelon get to have all this great food and I had to wait until Thursdays in Cow Head to buy a banana? I’ll tell you why. Because the French don’t eff around, that’s why. If they wouldn’t let Marie Antoinette have her cake and eat it too, they’re not going to let living on a tiny island 3800 kilometres from the Motherland change the way they eat.

I think giving five year olds café noisettes might just be a step in the right direction. 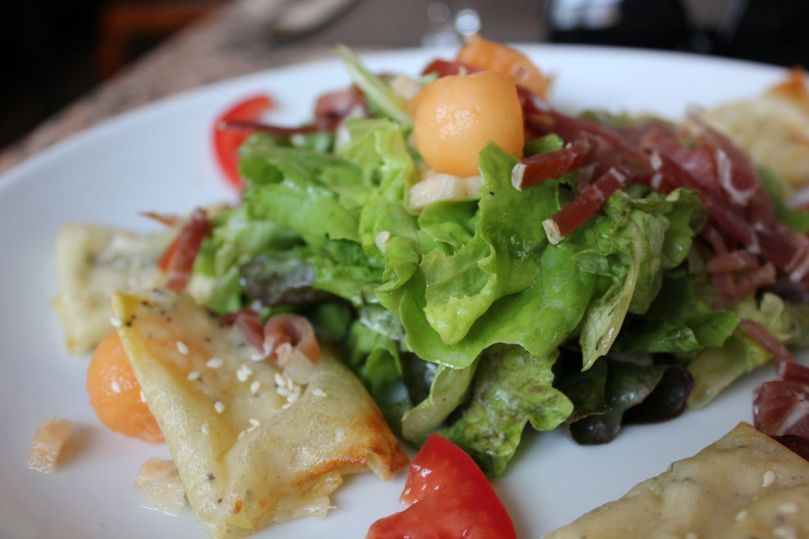 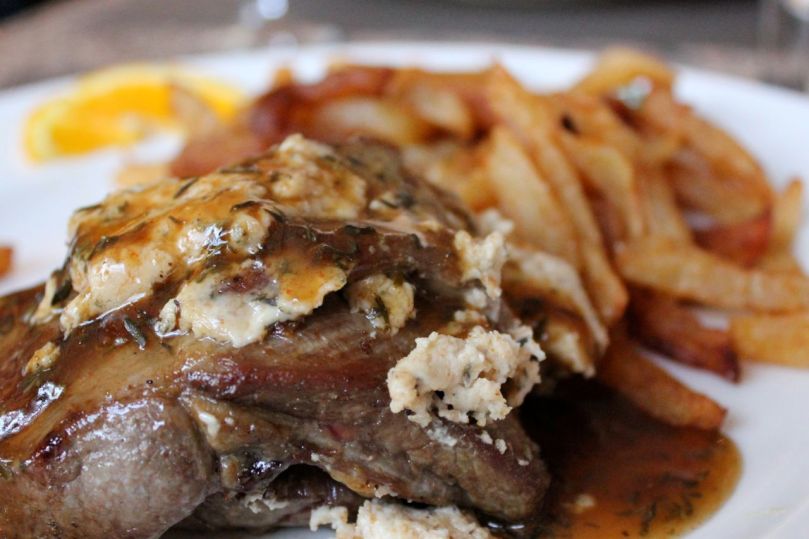 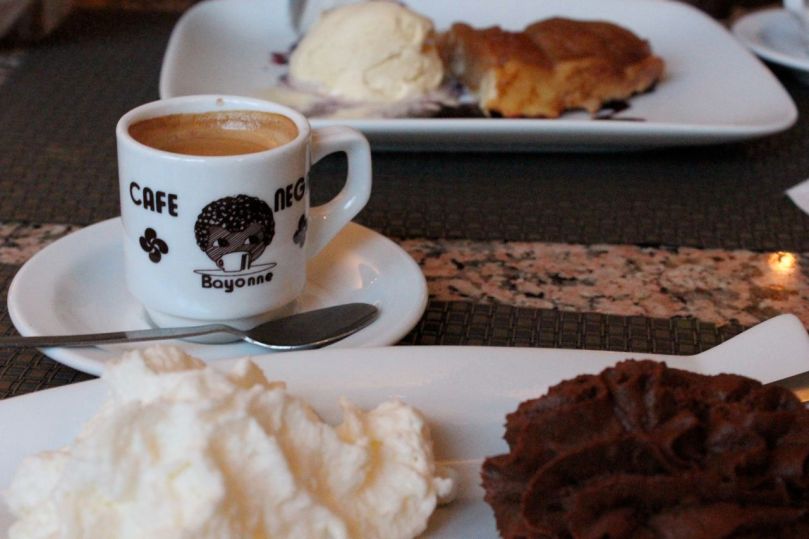