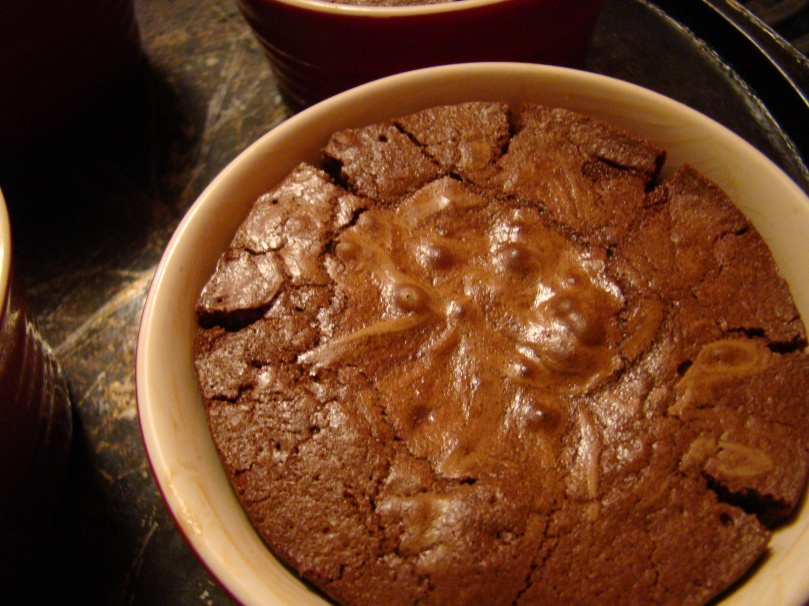 I never had the chance to have a cup of tea with her so I can’t say for certain, but I think Etta may have been singing about a lava cake and not some fella. This is the one, folks. This is the dessert that will realign your molecules. This is the dessert that makes me feel like the past 35 years have been empty. The infuriating thing is, I’ve known about the recipe for years but stupidly never gave it a go myself until a few weeks ago. My sister Robin has been making these for a few years and they’re her go-to dessert. She’s an amazing baker, but these babies only get pulled out for special occasions, when she’s really out to impress. She’ll watch people lose their minds at the table while she sits and says, “These things? They’re no big deal.” In the meantime people are falling off chairs. I finally got to try one a couple of years ago on a visit to Halifax. Robin didn’t take her eyes off me when I took my first bite. I shut my eyes, dropped my spoon and laid my forehead on the table. “I knew you’d do that.” she said. So yeah, these things are alright. And I will give myself the oh so slightest pat on the back for thinking to make them with a batch of homemade raspberry ice cream. Yep. You heard me.

When I was a kid my idea of chocolate was covered in foil and hidden in boots. I loved that shit. Ever find a year-old leftover Easter Mr. Fruit and Nut in your closet and eat the whole thing and wake up in the middle of the night covered in your own sick? Maybe that was just me. In any case, I should have learned my lesson back then. Although my mother would have missed out on the formative child-rearing experience of having a six year old walk down the hallway looking like Carrie. Note: chocolate gets old. That’s not a scientifically researched fact, I was there (I also haven’t eaten a sloppy joe since 1992, but that’s a food poisoning anecdote for another day). I’m not knocking milk chocolate, it’ll do in a pinch. A Dairy Milk with a cup of tea next to a fire after a five hour hike tastes like the angel Gabriel put it in front of you. However, taste buds evolve as you get older. They have to, right? Imagine a thirty-seven year old who only eats chicken nuggets. And real chocolate? With 70-80 percent cocoa solids? That stuff could start wars. I know people who swear by the 90 percent, but I can’t trust anyone who eats chocolate that tastes like dirt and enjoys it. You just…you need some sugar. Everyone got so excited when eating chocolate became a health trend. Do yourself a favour and pick up a Women’s Health magazine. Skim for a bit and you’ll find out a few pages in how much chocolate is good for you. One square of the 95 percent stuff, that’s what. Just once, I’d like them to say, “We know you’ve had a shitty day. Eat a Toblerone. A full one. Because you know what? We altered the photo on the cover. If Rachel Bilson’s waist was actually that small, she’d crack in half.”

It’s so easy you have no excuse. This is the easiest and most impressive dessert you will ever make. You can make it for anyone and if they don’t like it, you don’t need them in your life. I was watching an episode a while back of Come Dine With Me Canada and someone scoffed at the dessert choice of lava cakes. Who the hell scoffs at lava cakes? They said something along the lines of it being safe and boring. I wanted to reach through the screen and grab that arsehole by the throat. It tastes good, it looks pretty. Maybe it doesn’t have candy spun sugar in the shape of a crescent moon or sing you an Elton John song, but it tastes like angels singing in your pants. Don’t get on TV and say something stupid like that. Jesus. 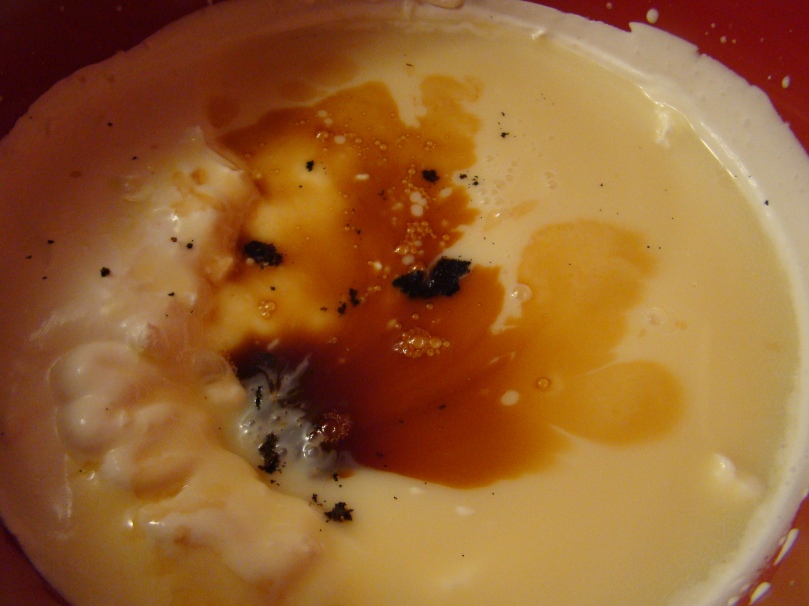 I made the homemade raspberry ice cream the night before. You could give it a go the day of, but I like my ice cream hard. Soft, melty ice cream stresses me out. I don’t even like the twenty minute walk from Sobeys in winter when I have to carry it home. And in the case of lava cakes you need it good and hard to withstand the heat. For those of you who haven’t attempted the homemade eggless, machineless ice cream recipe I posted back in August, you really need to do yourself the favour of a quick trip to the store for supplies and a quick trip to your room for stretchy pants. Here it is, one more time. Beat 500 ml of whipping cream into not so stiff peaks. Add one can of sweetened condensed milk, and one teaspoon of pure vanilla extract or the seeds from one vanilla pod. Or both, if you’re cracked for vanilla (I am, so I did). Stir together well (make sure the little vanilla seeds are evenly distributed, they can be tricky and stick together in tiny clusters), place in a covered container (or a bowl with cling wrap) and freeze, stirring every hour or so for a few hours until frozen. Leave overnight for extra-firm ice cream. 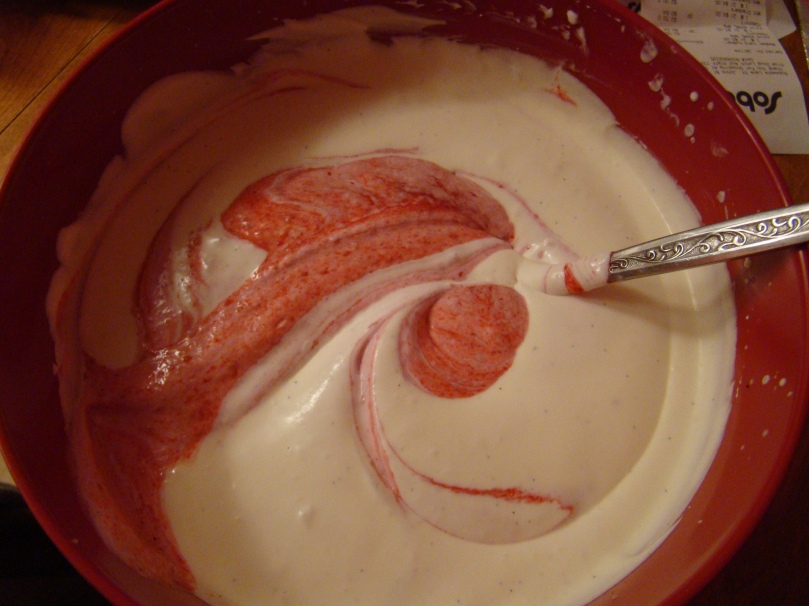 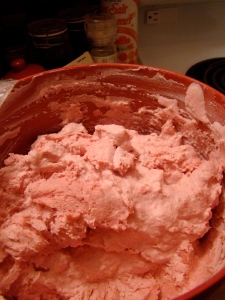 The plain vanilla stuff is simple and perfect and I’m imagining would be really something with a lava cake. Even better if you chose a flavoured dark chocolate like mint, orange, or chilli. I had a handful of the chilli stuff at Sobeys until I thought of raspberries and decided at the last minute to pick up regular dark chocolate. The possibilities for this ice cream recipe are all up to you. I’ve made a few batches since the summer, one with wild strawberries and toasted walnuts and another with pureed mango. Just stir in whatever you like, it’ll all work out in the end. I might not be able to go back after the raspberries. Two packs of fresh raspberries, the ones in the plastic containers. Give them a quick wash, and puree them with the tiniest bit of water if you need to. Stir the puree into the ice cream mixture before you pop it into the freezer. Don’t add sugar, the ice cream will be sweet enough and the berries will tart it up just right. And there’s not much better in the world than tarted up ice cream.

Right. The lava. Robin got this recipe from one of her Nigella Lawson cookbooks. Nigella calls them “Chocohotopots.” I’ve tried saying that. It sounds stupid when I say it, I’m not British. So for our purposes, we’ll call them lava cakes. Robin’s sort of taken this recipe and played with it, made it her own, worked on the perfect conversion from grams to cups, all that stuff. I followed her instructions to a tee and I won’t change a thing when I come home from tour and make these things once a week. 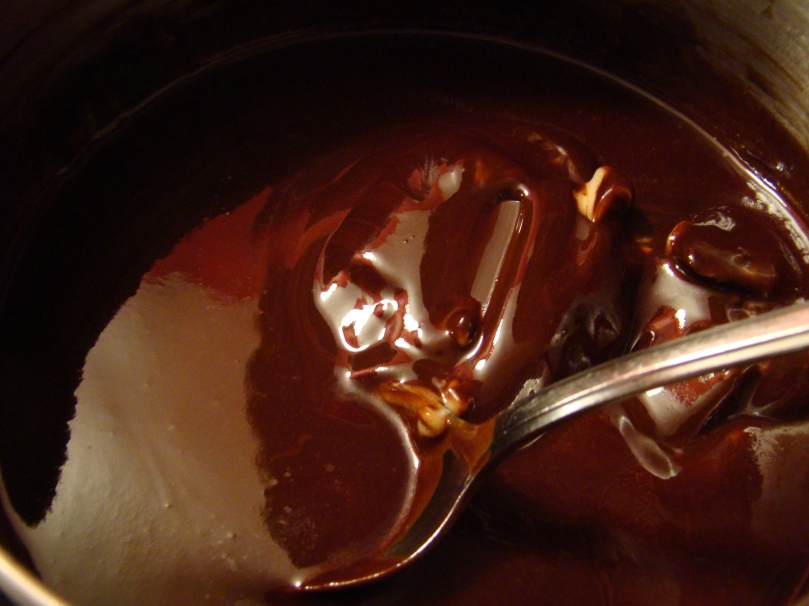 Place a pan in the oven and preheat to 400F. Melt chocolate and butter together. Set aside and let cool a little. Mix eggs and sugar together then flour and cooled chocolate and butter. Divide the mixture between four oven-proof ramekins greased with butter. Place ramekins on the hot pan and bake for 15-20 minutes or until the tops are barely cracked like the top of a macaron. Serve immediately. 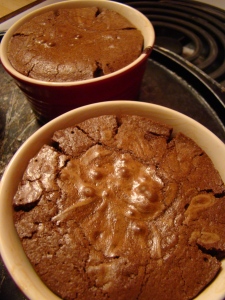 That, my chocolate dumplings, is it. I think this dessert works so well because it’s kind of the purest thing you could ever bake. Nothing fancy, just good stuff. Real butter. No margarine. Good dark chocolate. The stuff in bars is easy to divide up into the exact grams that you need; I used Lindt dark, 70 percent cocoa solids. Sugar, flour, eggs. The things you usually have in your house. I’m no baking snob and I can pound back a bag of semi-sweet chocolate chips with the best of them, but I like making chocolate chip cookies with bars of dark chocolate, chopped up in chunks. Once you try it, you’ll keep a few bars in your baking cupboard too (try your favourite chocolate chip cookie recipe with chunks of the Lindt chilli stuff, or give this recipe a go with it; that’s my next experiment). All you need now are a few ramekins. Just be single and buy a house, you’ll get a shit ton of them for your housewarming and every Christmas after that. 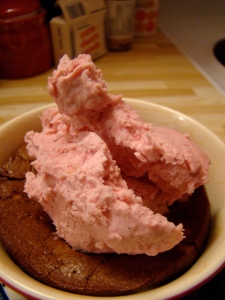 Don’t over bake! Robin couldn’t stress this enough when she gave me the recipe over the phone. You’ll end up with a lovely little chocolate cake, but no molten lava. It will depend on your oven and how much you two hang out, but mine baked for 18 minutes exactly and turned out perfectly. Katie was the first to fall victim to the chocolate volcano. I was kind of nervous, this girl knows her desserts. I piled on a spoonful of pink raspberry ice cream and handed over a ramekin (wearing oven mittens of course, mind yourself). She took one bite and yelled, “The ice cream isn’t even melting because it doesn’t know what to do! It’s so happy!”

That about sums it up. And that might be the nicest thing anyone’s ever yelled at me. 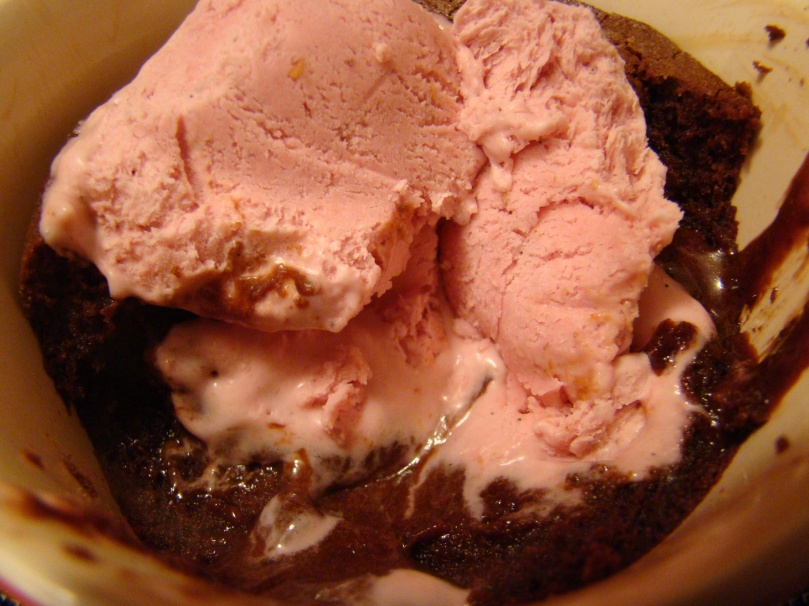