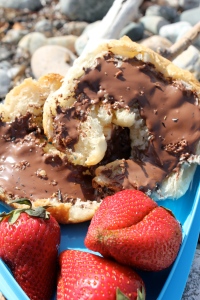 Back in Cow Head after two trips across the Trans-Labrador Highway and I was good and ready to light some shit on fire. Nothing too serious, just a little boil up to reassure myself that I was still hardcore, even though I’m afraid of bears and helicopters. A walk out to the head for a little fire on the beach. What? There are coyotes now? The kids aren’t allowed out at recess anymore? Jesus. I get taking away peanut butter, but can we give them back their slingshots and let them play outside? Anyways, I like to think I could take one down if I had to (a coyote, not a child). But I did run away from a fox that one time when I was jogging because I was afraid of getting rabies. Looks like somebody’s all talk and needs to fashion a slingshot herself. I ended up keeping it kind of local and just walked down to the beach…the part that’s around the corner from the national park where you won’t get in trouble for having a little fire and where there’s enough driftwood to cook yourself a little something and make a cup of tea. All I wanted in the world was to toast the croissants I had bought in Blanc Sablon on the fire and spread them with Nutella. I would punch a coyote in the face for that.

Most of my camping supplies were packed away in my friend Adrian’s basement; I knew I needed to get to the beach now or I would fall into a Trans-Labrador Highway induced coma (we had only just driven from the ferry that morning). I grabbed some matches, packed a bag and headed out. Lit a small fire and put my croissant next to to it, laid on a rock. Caveman cooking. But the chocolate was melty and the croissant was toasty, as toasty and melty as my little heart when I took my first bite. I didn’t even mind the soot and tiny pieces of wood. 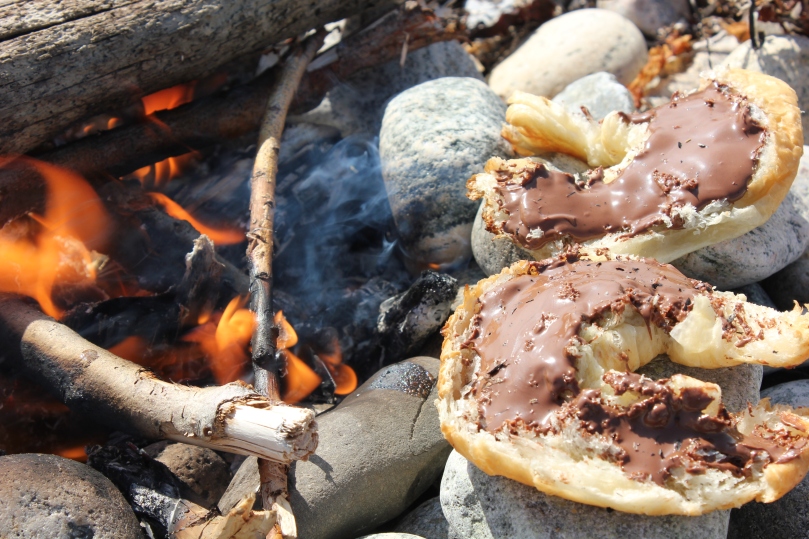 Curry for supper! A little jaunt down the road I suppose, to see what lovely produce I could procure from the Riteway. Potatoes it is! Oh, Cow Head you do have an Idaho potato like no other. I unpacked my groceries and took out the spices I had grabbed at the epicerie at the last second. Here’s what happened. 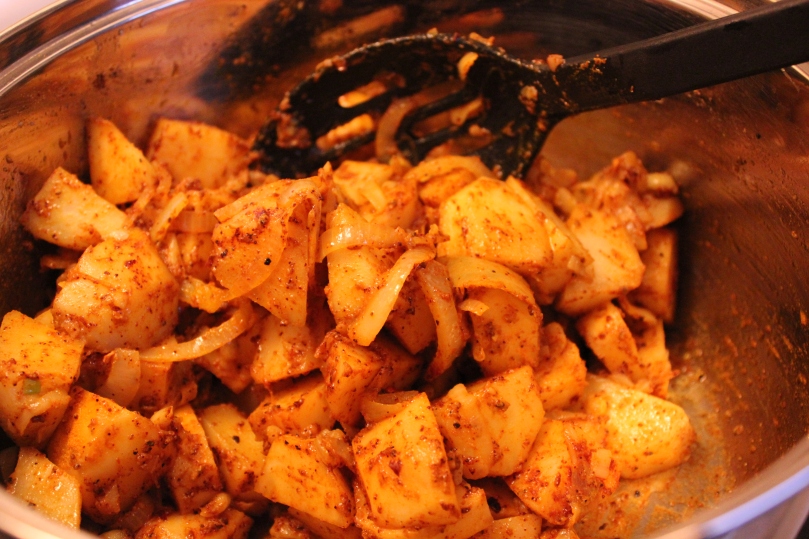 Heat oil in a fair sized pot. Add garlic and onion and cook until onion is soft. Add the potatoes, spices, and season with salt and pepper, stirring well. Stir in the broth and bring to a boil. Reduce heat and simmer until potatoes are cooked through, about 10-15 minutes. Pour in cream and let it gently heat, but not boil. You’re done. Serve with rice and sprinkle with chopped fresh coriander. 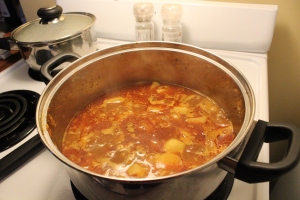 You could easily half this, but I had a bunch of food that needed to be used right away, before I hit a hotel room with no fridge and food I couldn’t cook. I think it would be great with coconut milk too…not as rich and a little bit sweeter. Tasty a couple of days later but a little thick once the potatoes broke down. It’s a heavy curry, one more suited for curling up in November under a blanket. I’ve come to realize that I suck at seasonal eating and it gets even worse on tour. That’s a lie, I haven’t come to realize that, I’ve known it along. It’s something I will work on when I live in a place that doesn’t have winter eight months of the year and is warm enough to grow a tomato without a greenhouse. I’m so, so sorry Nigel Slater. I try so hard. I buy the strawberries from Peru in January at Sobeys. I can’t stop myself. And the little bags of clementines from Israel. What the hell? We get fruit in Newfoundland from Israel. That is just so wrong and weird and excellent. I wonder if they would like our salt beef, because for sure that stuff is Kosher.

I’ll be trying this on tour again but maybe with chicken and fresh green beans or vegetables that are a little bit crunchy. Or ooh! Some fresh cod, with the coconut milk. And
I can’t believe I just realized that all these years I thought it was tumeric. It’s turmeric. I feel me and Bal Arneson could never be friends now.

Also, Dainty Rice? You are bullshit.

Up the Great Northern Peninsula a few days later (or down depending on who you’re talking to) and a miserable cold day in St. Anthony. The sight that greeted us when we pulled into our guesthouse: two youngsters in snowsuits jumping on a trampoline. Which I strongly feel should be the image for the next Newfoundland and Labrador tourism campaign. 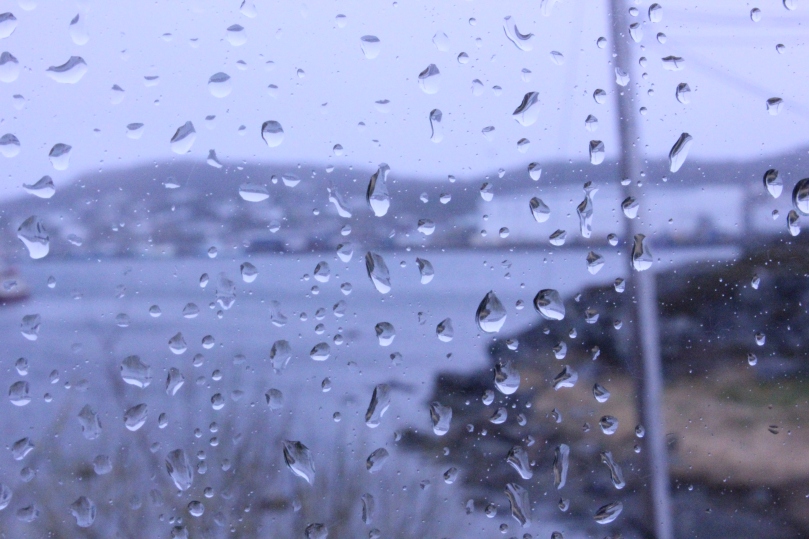 Wally had picked up some moose sausages from his father-in-law in Hawke’s Bay and he asked if I wanted a couple. Sweet Mother, yes!! Sausages might be up there with my favourite foods, but they’re always eaten with a little guilt. We don’t need to get into the reasons here, but it doesn’t take a Michelin chef to figure out that a moose having a laugh in the woods makes a better sausage than a sad little piglet in a pen. 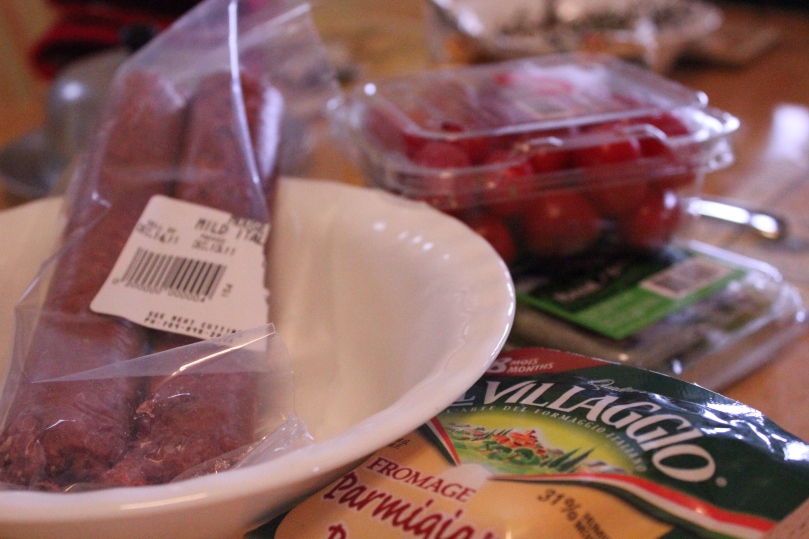 So I started making this pasta a few years back and it has become a staple ever since. I’ve said before it’s only recently that I kinda get pasta…how simple is always better. Not that I don’t enjoy going face and eyes into a huge plate of spaghetti and meat sauce every now and then, I do. But if there’s good butter, garlic and fresh Parmesan, you’re never stuck. Even if it’s three in the morning and you’ve just gotten home and feel confident enough in your cooking ability that you won’t burn your house down. Nothing fills your belly better after a night of too much whisky than a hot bowl of pasta before bedtime. I use Jamie Oliver’s Pasta Bianca recipe as a guideline for this one. You just need pasta (I like spaghettini), butter (salted), a couple of cloves of minced garlic and a handful of freshly grated parmesan. For simplicity’s sake I never let myself add more than two extra ingredients; I can picture a little old Italian lady standing over my shoulder getting ready to smack me in the back of the head if I get too heavy handed with the extras. This can be very scary, especially during a three in the morning whisky scenario. Then she looks more like James Gandolfini in a dress and holding a weapon. I broke this rule in St. Anthony only because I had moose sausages and there were lovely cherry tomatoes and fresh basil at the store. James didn’t get angry, she merely raised an eyebrow and nodded at me to continue. Alarmingly, I wasn’t even on the whisky that night.

I tripled the recipe because I was cooking for myself, Wally and Karen, but here’s the rough, very rough recipe for one. For those late nights at home apres bar. Easy to double if you’ve had an especially good night out, and miles more impressive than bringing home plastic bags of Subway. I make it by taste and always go heavy on the garlic and Parmesan. And butter. I go heavy on everything, I’m not scared. Put a pot of salted water on to boil. Gently warm a couple of cloves of minced garlic in a tablespoon (or more) of butter in a large frying pan. Gently, gently! You don’t want the garlic to brown. Cook a single serving of your favourite pasta al dente and drain, reserving a little of the pasta water. Add the drained pasta to the garlicky butter pan, along with the handful of Parmesan and some freshly ground salt and pepper. Stir everything together while adding a little of the reserved pasta water. When it mixes with the buttery, cheesy pasta, everything turns glossy and creamy. Serve immediately. 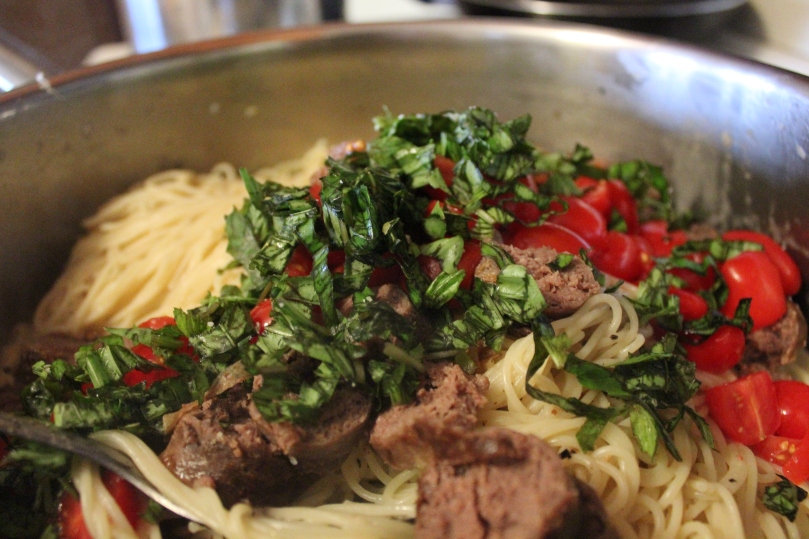 Cooking this pasta will make you feel like a rockstar (not Tom Cruise rockstar on the cover of W magazine, I’m still having nightmares). I go through phases where I eat this three or four nights in a row (and that’s not three in the morning thank you very much, I’ve also been known to dine at regular hours). It’s so lovely on its own, but depending on what’s in your kitchen, mess around and toss some fun stuff in. Just keep looking over your shoulder and don’t get overzealous. Leftover cooked bacon, fresh basil, dried chilis, little cherry tomatoes cut in half. Throw them in right before serving. Especially important for the cherry tomatoes; you don’t want them to cook and make the pasta all watery. Pancetta’s great too, but crisp it up a little first with the butter and garlic.

Tonight was basil, cherry tomatoes and slices of cooked moose sausage. I’m pleased to report that for the first time in my life, I didn’t overcook the meat. No need to be afraid of undercooked moose I guess, or if there is I don’t want to know. I would like to remain blissful in my happy meat ignorance.