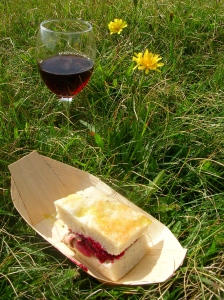 We’ve all said things like “that meal just changed my life.” And if you haven’t, well…you might want to take a serious look at what you’re eating. I’ve eaten lots of meals that have changed my life. I probably overuse that phrase, but that’s how much I love food. There’ve been a few recipes (especially over the course of this past year) that I’ve made again and again for friends and family that I love and yeah, I think they’ve changed my life. They wake me up a little, they make me better. So…yeah. But the closest I’ve come to food tears was a couple of months ago at the Roots, Rants and Roars Festival in Elliston. Root cellar capital of Newfoundland (or quite possibly the world) and one one of the prettiest places I’ve ever laid eyes on. Shamefully, it was my first visit, but after this massive weekend celebration of food, I know it won’t be my last. 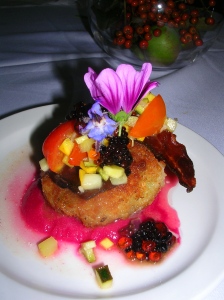 Like a lot of Newfoundlanders and Labradorians I was tickled to find out that Todd Perrin had been chosen to be on Top Chef Canada. Todd’s a chef here in St. John’s and I’m pretty sure that cable companies had a few phone calls inquiring about the Food Network when word got out that a local was going to be a contestant. I was cableless in Cow Head this past summer but thankfully I could watch the episodes online. I’m not one for reality TV (except for Say Yes to the Dress, I love that shit) but anything to do with food and I’m hooked. Especially when there’s going to be a ballsy Newfoundlander who’s not afraid to use seal meat on the first episode for his signature dish. Todd was a straight-up classy guy on the show, got eliminated halfway through (robbed, naturally) but clearly made an impression with judges and his fellow chefs. Towards the end of the summer I caught wind of this festival that was happening at the end of September. A huge celebration of food using local ingredients at several different events around town. Some of the best chefs in Newfoundland would be there, and Todd Perrin himself had managed to wrangle six Top Chefs from the show to come to Elliston as well. I think I broke out in a cold sweat when I first read about the event. It was the stuff dreams were made of, like if someone asked “In a perfect world, if you were to organize a food event in Newfoundland…” This was it. I agonized about whether or not I could do it, if I could make it that weekend, if I would be working, if the car would still be alive to make it across the province again. But when I found out that a group of pals were headed out and one in particular was flying home from Toronto just for the food, I knew I was in. I bought the three day pass online and told myself that if Lucy the Honda Civic expired on the trip, I’d hitchhike. 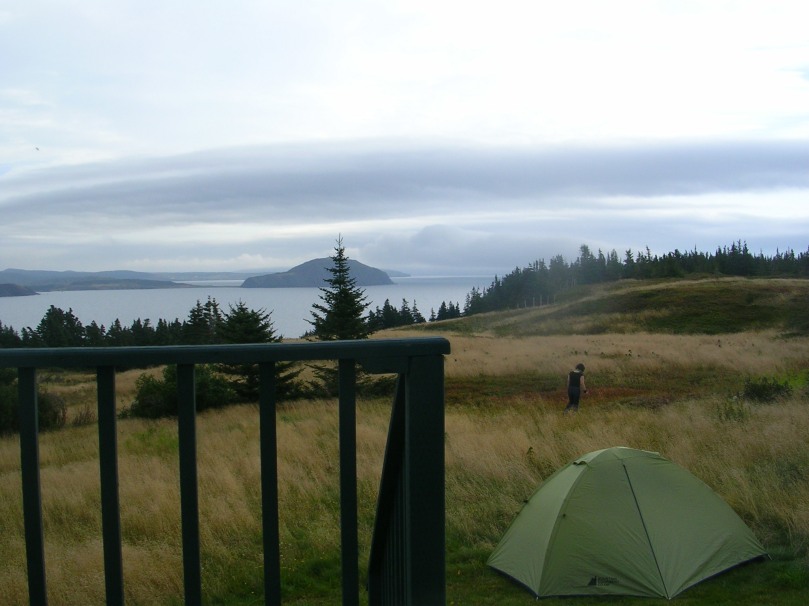 Lucy made it. Thankfully you don’t really need power steering if you stick to the main highway, so I arrived safe and sound in Port Rexton on a Friday afternoon. Friends had rented a house there and I was the weirdo who pitched a tent on the front lawn. We all piled into a car (not mine, headlights broken, excellent reason to not be the designated driver) and drove the forty minutes to Elliston. The first event on the schedule was “King of Cod”…five chefs from St. John’s competing for the title, each one having to prepare an original dish using codfish. The little community hall was humid, hot and full of people and when the smell of the food hit me in the face when I walked in, my little heart shed a tear for what I knew had been the best food decision of my life. 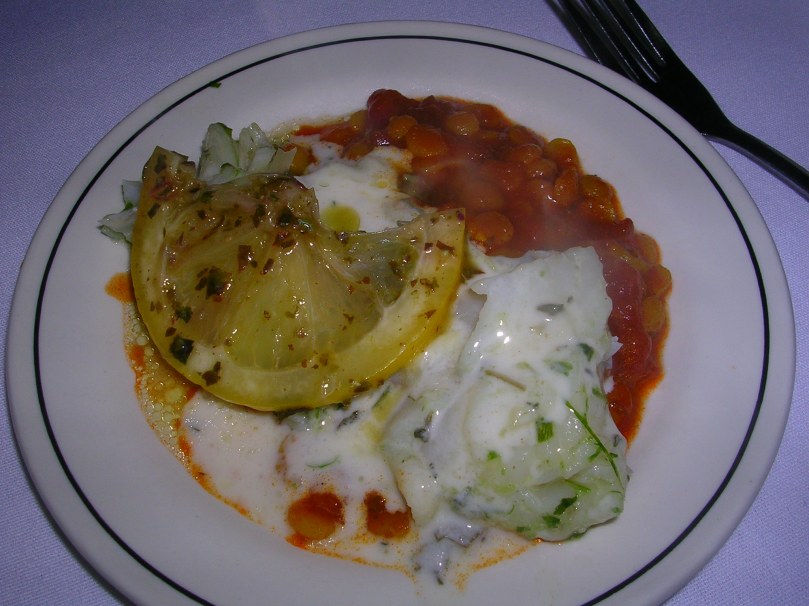 I should have taken notes. I should have taken the time to jot down the names of the recipes, the chefs who toiled over them, the exact ingredients used. I went in with that intention, but it was everything in me not to take each and every little cod dish into a corner and weep for joy, let alone keep track of notes. I did however, manage to take a few snaps with my shitty but trusty Korean black market seven year old digital camera. The first heart-melting dish I tasted was cod poached in olive oil on a bed of split-pea masala. I didn’t even know you could poach anything in olive oil. I though you could only poach eggs in water. Not really, but I felt humbled and pretty honoured to be there. And embarrassed about my lack of cod-poaching skills. After the votes were tallied, Jeremy Charles won with this blackened cod, Pernod and sea urchin beurre blanc, parsnip puree, jigg’s dinner-ravioli miracle. Every dish was special, every dish made me want to hug the chefs, but that would have been weird and they were pretty busy. 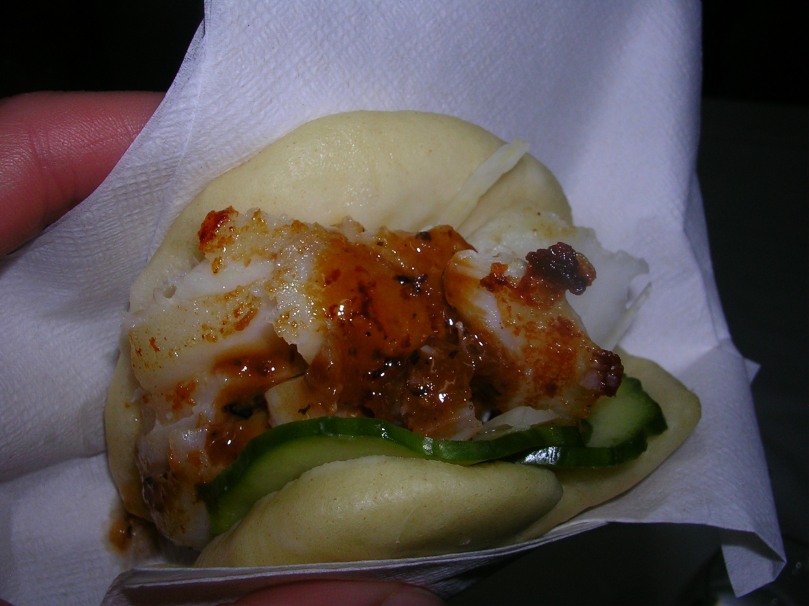 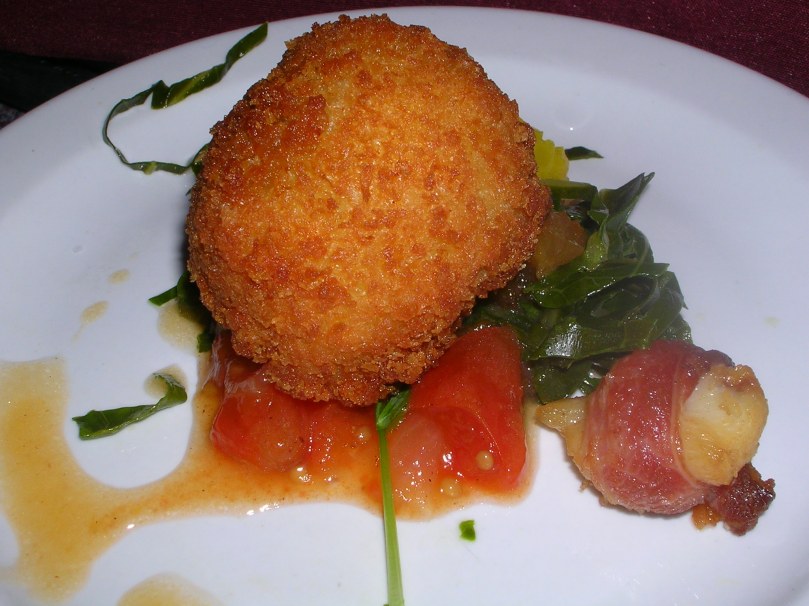 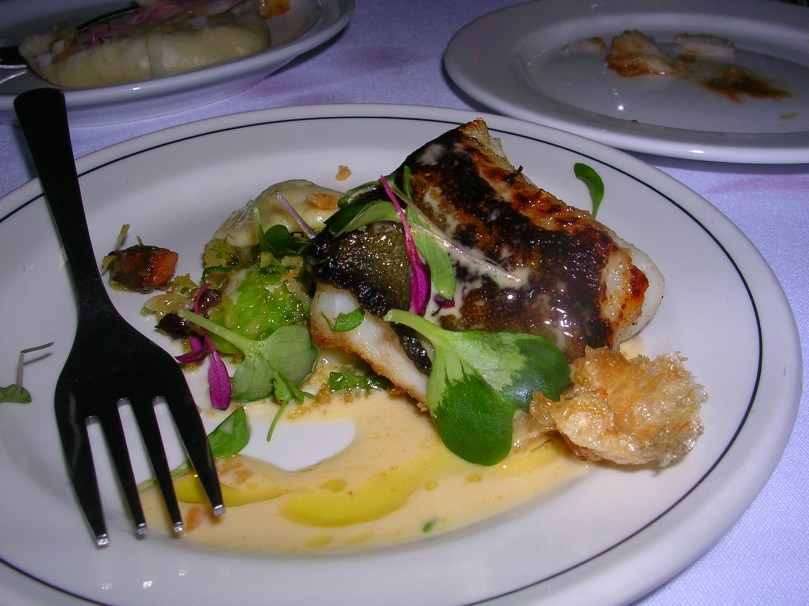 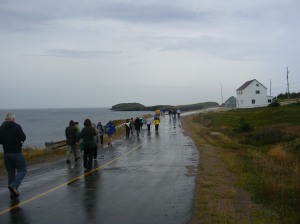 I could have walked away happy that night, the food was so good. But I figured I’d stick around for the food hike the next day. Five stations manned by Canada’s Top Chefs, serving five original dishes using fresh Newfoundland seafood and meat. The weather held and it went from rainy to humid and sunny…we trudged up and down the roads of Elliston and I felt like I was in a tourism commercial. Root cellars, laundry blowing in the wind, salt-box houses. I didn’t see any red-haired freckly faced kids, but if they were around they were probably lining up for the moose croquettes, homemade squid-ink pasta, and cod with lime and coriander butter. It was like something out of a dream. All that and you could walk up and down the road with a glass of wine in your hand and no one looked at you funny. 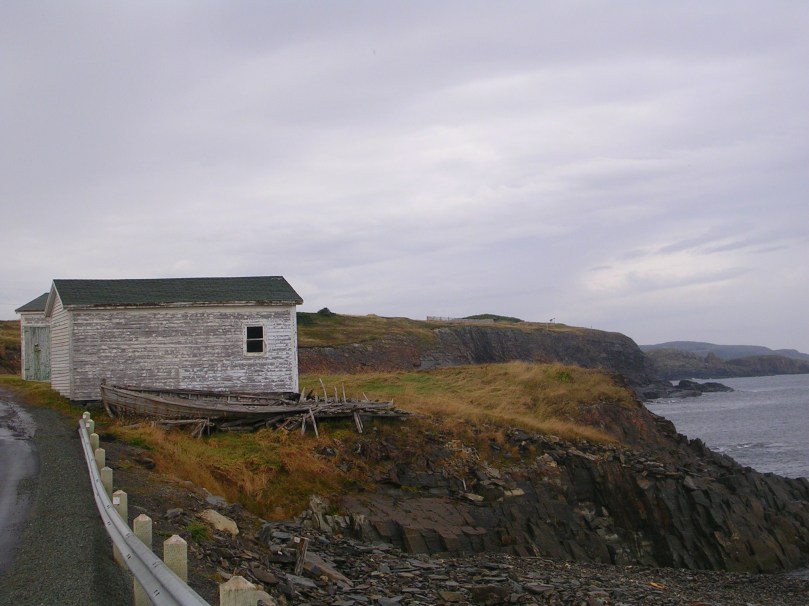 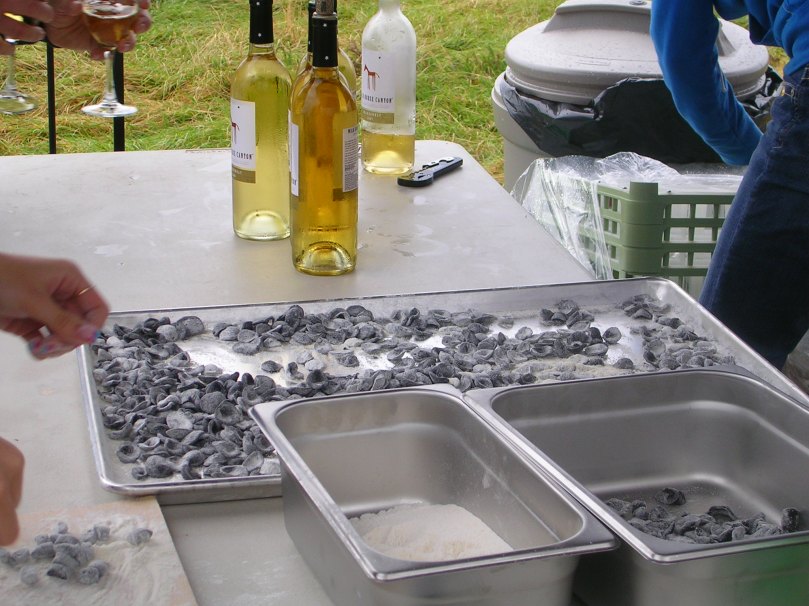 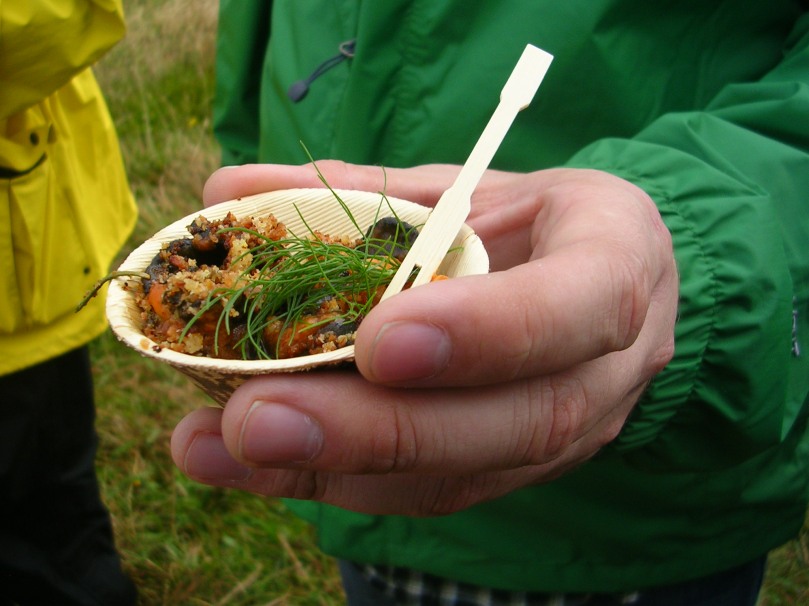 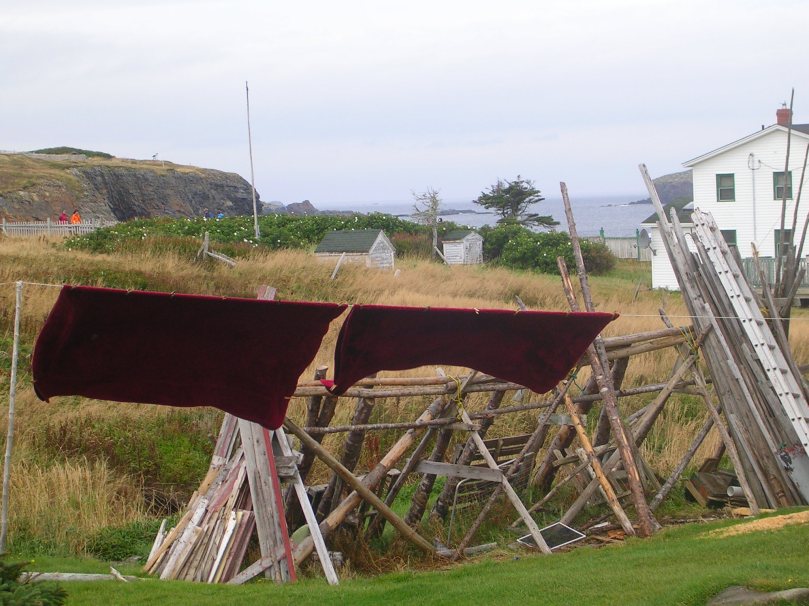 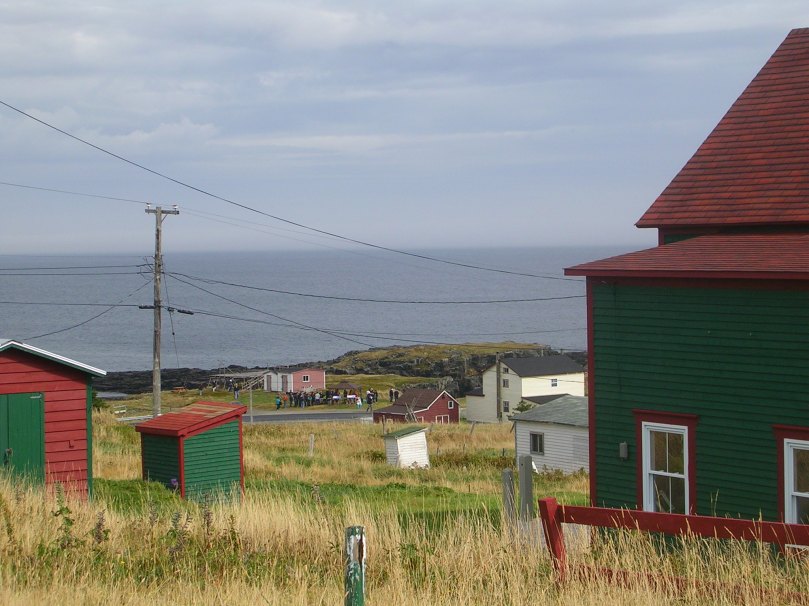 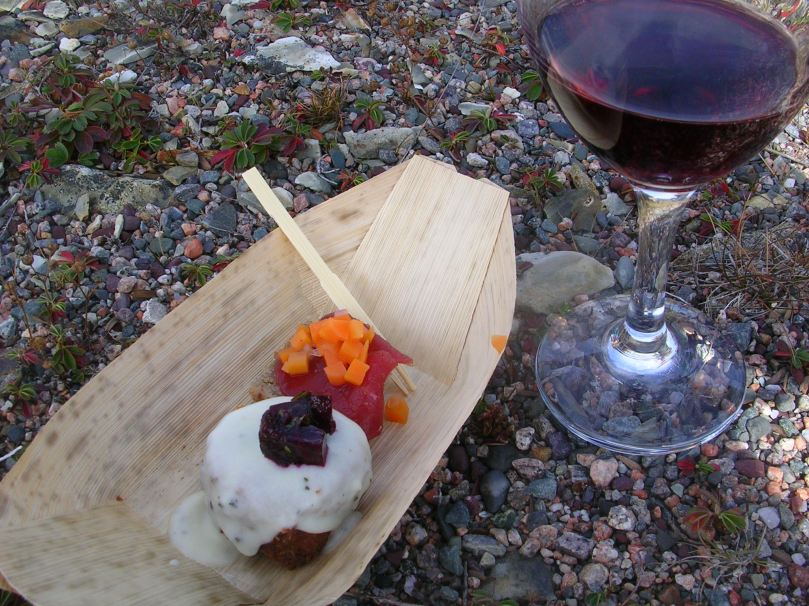 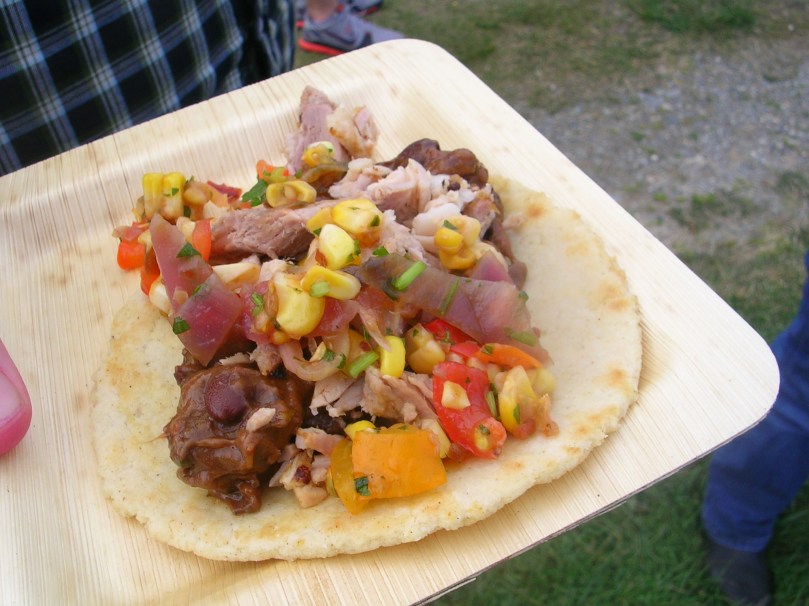 So I didn’t try to make a new dish that week, I let Roots, Rants and Roars do the work for me. I had to cut out of the festival a little early and miss the last day because of work, but I drove away in awe of what I’d eaten and what I’d experienced. The turnout was impressive and I’m pretty sure the turnout was impressed. If you’re at all in like or in love with food, grab your tent, your friends, your dog, grab your kids and tell them their chicken nugget days are numbered. Get to this thing next year by whatever means possible. You’ll marvel at what you thought you knew about Newfoundland cuisine. You’ll use the word marvel. And you’ll walk away a little prouder of what’s happening in this have-food province. 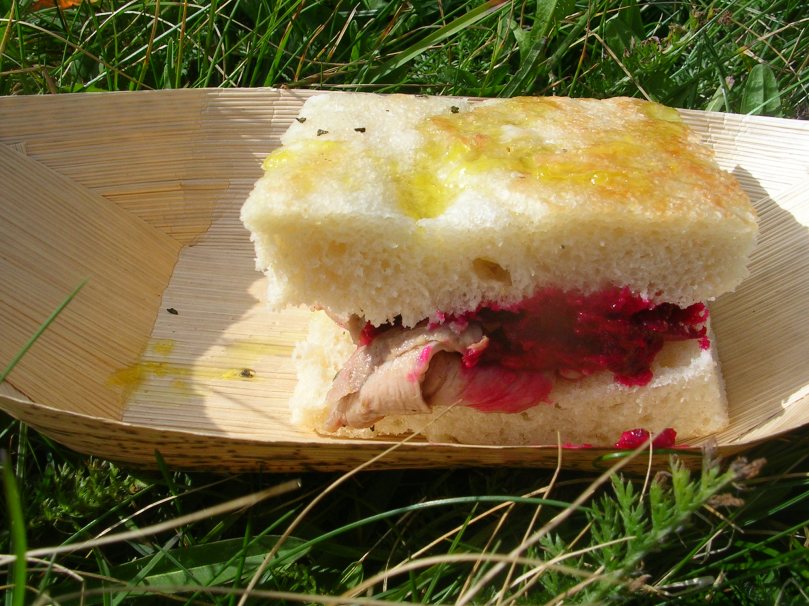 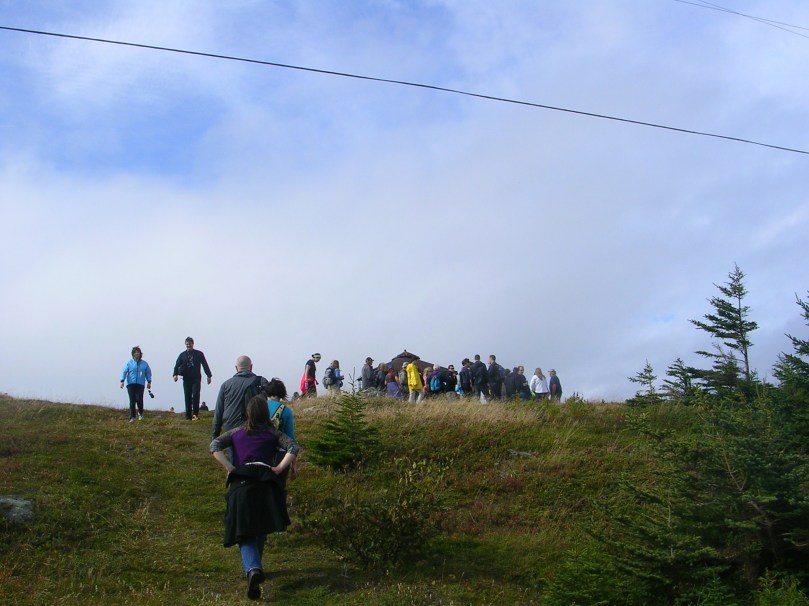