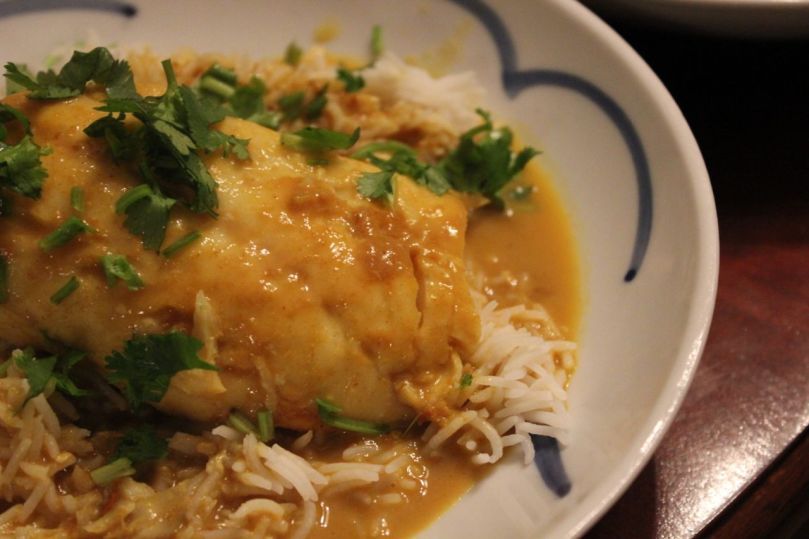 Food, how I’ve missed you. I have a friend with two kids who told me when I was still pregnant that it sure was a good idea I bought an espresso machine because soon coffee and food would be my only joys in life. I thought, jeez, that’s kind of harsh. What about the sweet little bundle of joy I was incubating? It was only after I had a kid that I realized she was the only mom-pal I had who TOLD THE TRUTH. Oh, man. Babies. And wow, was I ever one of those smug non-parents who thought I would actually get stuff done after I had one. It wasn’t like I was having twins, how messy could my house get? I would just clean when the baby napped. I would write when the baby napped! I’d swaddle it in a fuzzy blanket decorated with yellow ducks and it would sleep in a ray of sunshine on the bed in my office for at least three hours at a time while I wrote a blog a week and finished a novel. Sure I’d be a bit tired, but that’s what my brand new espresso machine was for. My baby would watch, fascinated, perched in its bouncy chair on the kitchen table while I basically did everything I did before I had a kid. Except get drunk by myself and stuff, obviously. But I refused to let a baby change my cooking and eating habits.

Hahahahaha, I was such an idiot. I wish all you parents out there had told me how babies actually work. The first two months I only had time to breastfeed, cry, eat one meal a day, or some weird combination of all three. Getting changed out of my bathrobe was kind of a big deal, and a shower happened three times a week if I was lucky. I can’t even wrap my head around how people have twins, I definitely would have had to give one away. I conveniently forgot my house was always messy before I got pregnant, so how I thought that would magically change after a human came out of me is anyone’s guess. Naps for baby meant the two of us in bed, me bum-patting with one hand, head-rubbing with the other, and singing Baby Beluga for an hour so the both of us could get twenty minutes sleep. And if I left that bouncy chair unattended to make a piece of toast this is what happened:

Also, “it” turned out to be a little boy, even though everyone told us we were having a girl. Except a Turkmenistani lady at the International Food Fair last November who gave me free meatballs when she saw I was pregnant, looked me up and down and told me very seriously I was having a boy. And that espresso machine? I didn’t learn how to use it until the baby was sitting up on his own. But is he ever friggin’ sweet. And after a few months of figuring each other out, he’s a joy in my life, too. After coffee and food. I kid! Of course he’s number one. Number two on days he’s teething. And has ripped a tile off the fireplace when you weren’t looking to soothe his aching gums.

I can count on one hand and remember in excruciating detail the meals Justin and I ate together in the first three months of Jude’s life, on the rare occasion he slept by himself (not joking, three of them: one Piatto pizza, ribs and potato salad, veg fried rice with sunny side egg on top and hot sauce). I made a cod curry one Sunday evening when he was maybe a month and a half old. He was taking this crazy five-hour nap, one of those baby naps where you can get stuff done (like sleep) except you’re so freaked out the baby’s napping longer than a half hour you’re too afraid to do anything except run up the stairs every ten minutes to make sure he’s still breathing. I finally got it together long enough to get a curry on the go and he woke up as soon as we sat down to eat, of course. But it gave us hope that maybe he’d sleep like that again later that night, or maybe even the next day.

(It took him two more months to sleep more than five hours and I hope there are teenagers reading this who I’m scaring shitless into celibacy.)

Justin had spent some time on Fogo Island a few months earlier shooting a film about hand lining cod (check out the trailer for it, it’s been featured at festivals all over the world, won some awards, it’s so lovely) and came home with a few boxes he’d caught while he was out with the fishermen. It had been flash-frozen, and I generally save frozen cod for tacos or curries, going a bit purist when the fish is fresh and pan-frying it old-school. I made the Fogo cod in a baked Thai curry but I have a feeling it would have pan-fried really well…even though it had been in the freezer for a few months it was up there with the best cod I’d ever eaten.

This recipe is super quick and easy, very loosey-goosey…definitely not authentic-authentic in the way a good Thai curry should be, with painstakingly gathered fresh ingredients all pound into an honest-to-goodness curry paste. Last I checked it was virtually impossible to do this in St. John’s unless I’m behind the times in which case someone please let me know where I can get fresh lemongrass and the rest of it. But it’ll give you your Thai fix, you can do it in a half hour (pretty convenient, especially if you’re trying to keep a tiny new human alive), and the ingredients are fairly easy to find in these parts. 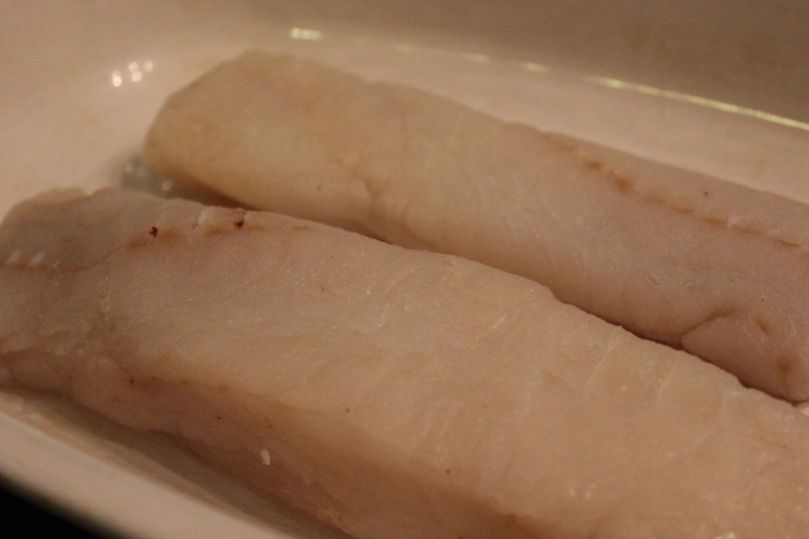 In a medium saucepan combine two cans of coconut milk, 1 heaping tablespoon of your favourite ready-made Thai curry paste, 1 tablespoon of soya sauce, 1-2 tablespoons of fish sauce, half a teaspoon of ground turmeric, the juice of half a lime, and 1 teaspoon of brown sugar. Throw in a stalk of lemongrass and a couple of kaffir lime leaves (if you can’t find, curry will still be nice) and let the whole thing come to a boil, then let simmer for a few minutes. Place 2 (or 3 if you like less sauce with your curry) fresh or thawed cod fillets in a 8×10 Pyrex dish and pour the sauce over top, leaving in the lemongrass and lime leaves. Bake in a preheated 400°F oven for 20 minutes or until fish is opaque and flakes easily. Serve with rice, chopped coriander, and lime wedges. 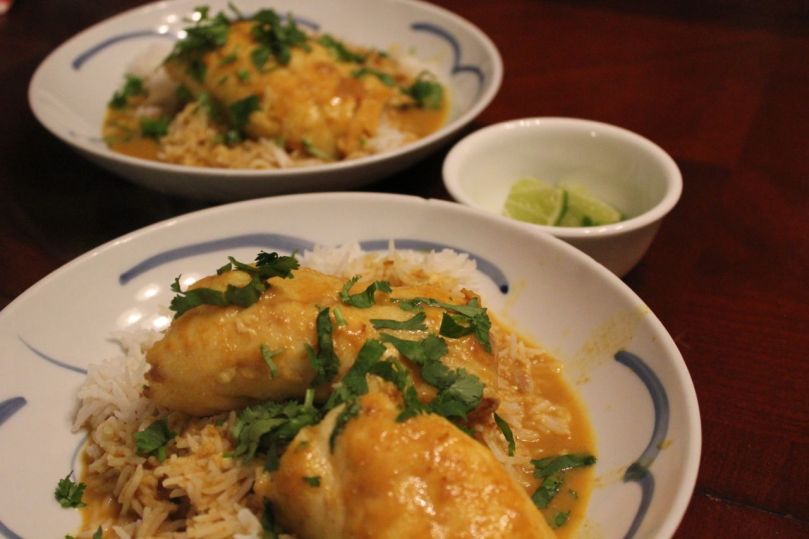 Again, this is all to taste and you can play around with the sauce before committing to anything. It might need more or less sugar or fish sauce, or a bit more lime juice depending on personal preference and the brand of curry paste you’re using. Add in another tablespoon of the paste if you want a stronger, spicier curry. I’ve done red, green and yellow, all delicious. Try palm sugar instead of brown if you can get your hands on it (the So Kee Grocery on Duckworth should carry most of these ingredients if you’re in St. John’s, including frozen lemongrass and kaffir lime leaves) and a bit of grated fresh turmeric instead of powdered is always nice, and I’ve heard you can actually get it around here these days.

This curry takes about a half hour, and hilariously, this blog took me over a year to write. But it all evens out in the end. Just like your new baby will when you think you’ll never eat without a tiny human in your arms ever again.

Or sleep. Or read a book. Or drink a full coffee without having to reheat it in the microwave five times throughout the course of a day. But you’ll get there. Eventually. I mean, it only took me fifteen months to finally get out of my maternity jeans. Happy cooking!! xo