Oh look, another top ten list. Which should have come a few days before the end of the old year and not three days into the new, so now it’s not terribly relevant (I’m well aware that my other posts don’t necessarily scream relevance, thank you very much). But you know you can’t look away, you know you’re looking for a good excuse to put off going back to real life tomorrow and the most awful day of the year: FIRST MONDAY AFTER HOLIDAYS. Unless you get real excited about Old Christmas Day, everything is done and put away and you’ve already dumped your Christmas tree at Quidi Vidi Lake. Part of me admires people who have their shit together enough to strip and dump the tree on January 1st, and the other part of me is thinking jeeeez, lighten up. Ours stays up till mid-January. Mostly because we’re lazy, but in part because January is generally terrible and the sparkly lights make me happy. So I say, embrace denial! Put on the kettle, put on your softpants and tuck into the leftover Christmas cheese. Poke around on Facebook and laugh at all the New Year’s resolutions your friends won’t keep. It’ll make you feel better about pounding the face of the rest of that wheel of Brie.

Besides the meals I ate at nice restaurants (all my favs came from Chinched Bistro this year because we eat there a lot and it’s the best), this year’s list wasn’t terribly exotic. When I finished compiling, I noticed four chicken recipes. But what the hell, who’s never looking for another quick and easy chicken recipe? No one, that’s who. There was pork, moose, beef, and tons of seafood this year, but to be honest a lot of it came down to what I casually took pictures of, and what struck me as easy and comfort food-ish. All the recipes are real simple, and good ideas to get you through a NL winter. Or they’ll inspire you to actually put on a pair of pants and leave the house and let someone else do the cooking.

No chicken likes to think it will end up this way, but unfortunately for them and happily for us, beer can chicken (or beer butt chicken, but I just can’t because oh, the poor little things) is one of the quickest and tastiest ways to liven up a barbecue, or even a Sunday roast. Try this rub adapted from Jamie Oliver’s beer can chicken recipe in Jamie’s America: 1 tsp ground fennel seeds, 1 tsp ground cumin seeds, 1 tsp smoked paprika, 1 tsp brown sugar, 1 tsp chill powder, 1 tsp salt, and a bit of freshly ground pepper. Mix with 4 tbsp of olive oil and rub mixture all over chicken and inside the cavity. Pour half a can of beer in a roasting pan with a few peeled cloves of garlic and a roughly chopped onion. Carefully place chicken over the half-full beer can and place standing up in the pan. Pour in a glass or two of water, tent the whole thing in foil and roast in a 375° oven (you might need to remove one of the racks for the thing to fit) for about an hour. Take out of oven, remove foil, and roast again for 15-30 minutes more or until the chicken is cooked through and the skin is nice and crispy. Using tongs, put the chicken on its side and remove the beer can. Let the chicken rest on a plate and strain the pan drippings into a saucepan. Thicken with a bit of cornstarch and water if you like, to make a nice gravy. Straining’s not necessary, you can use the drippings straight from the pan, but use it somehow because it’s delicious. I like my beer can chicken with a side of homemade oven fries baked with lemon zest and juice, then sprinkled in chopped parsley or cilantro when they’re out of the oven. The leftovers make the best hot chicken sandwich you will ever eat. 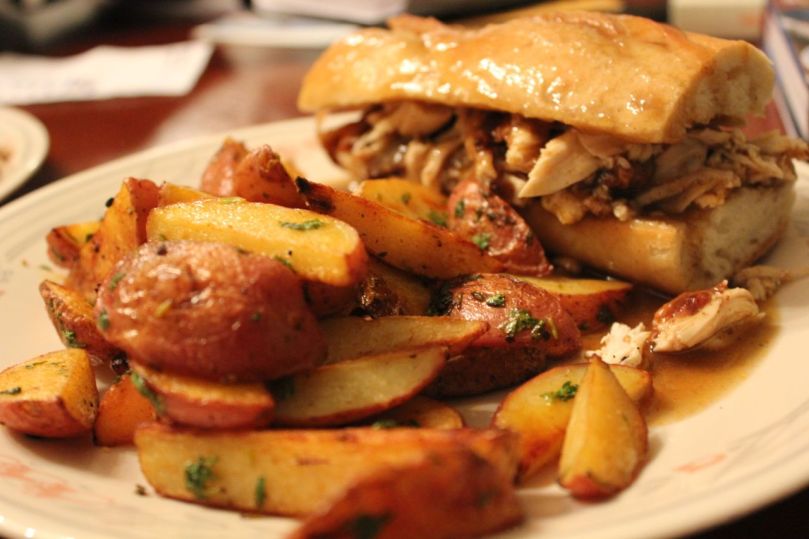 This is the best roast chicken recipe I’ve ever made. It’s so good it even knocked beer can chicken out of the coveted top spot. I made three of these in November for a bunch of my sister’s friends and their toddlers, and it was a huge hit. Even the toddlers liked it. Easy to cook for a crowd, and babies will eat it. You guys, this one is clearly a no-brainer. The wine cooks off so it’s fine for kids. And pregnant women. Unless you ask some of the crazier pregnancy online forum people who go so far as to suggest not using mouthwash with alcohol in it. It’s like the Virgin Mary is writing all the pregnancy advice or something.

“Pork belly with squid and sour cherries on a herbed quinoa, anyone?”

Seal has a bit of a controversial reputation, to say the least. This is mostly thanks to celebrities who couldn’t point out Newfoundland and Labrador on a map if their Louis Vuitton bags depended on it. We won’t get into that argument here, but it’s safe to say that most NL’ers defend the hunt fiercely even if they’ve never tasted the stuff, just to spite the likes of Pamela Anderson and Paul McCartney. I counted myself in that group until last April when I tasted seal for (shamefully) the very first time at Chinched. It was the loin, braised loin I think, on a bed of vanilla parsnip puree. Jeeeeeeesus in the garden was it ever spectacular. Our server Tim came back to check in, took one look at our faces and said, “I know, right? It’s not your nan’s flipper pie!” Honestly, just one of the most beautiful, tender, flavourful pieces of meat I’ve ever tasted. Cooked with love in the kitchen by a group of chefs who get it. Thankfully, most of the standout chefs in this city are bold and ballsy enough to educate the rest of the world about how great (and sustainable, humanely-hunted, etc, etc, etc) this meat really is.

How can a muffin make someone’s top ten list, you may ask? Because I don’t write for The New York Times and I can do what I want. These are super moist and freeze really well and are sort of kind of healthy-ish. Not really, but anything with oatmeal makes me feel like I’m at least putting in a mild effort, and I threw in partridgeberries to uh, get my daily dose of antioxidants. Make a pile of these for the freezer and defrost them low and slow in a 300º oven for ten minutes or so and it’s like they’re freshly baked.

Again, with the chicken, but this time on the barbecue. I remember this day so fondly because it was the one nice day we ate outside in July after a perfect day of hiking before summer went screwy and turned into November. If you’re using boneless chicken thighs, they will cook in no time on the barbecue. Do flatbreads on the grill too, and serve with Sriracha sour cream and cilantro. The best meal I ate outside all summer. The only meal I ate outside in July.

What? You think Michelin-starred chefs go home after service and whip up seared scallops and parsnip purees? No! They make sandwiches. Don’t knock it because there is nothing better than a good ham sandwich. Not the ones you ate when you were a kid, with Miracle Whip and white bread, squashed together in cling wrap. But a really good sandwich on good bread with good ham and toppings and condiments, like how Subway would be if the French had invented it. My doctor’s pretty cool and not prone to North American pregnancy food paranoia, but she did tell me to try and avoid deli meats. So I’ve been good in that department, while not so good in others (cookie dough). Naturally, my biggest pregnancy craving was a deli sandwich, so my mother-in-law baked me a whole ham that I could slice up and stash in the freezer for whenever the craving hit. That night, the long-awaited sandwich happened, in front of the television and a movie, and it was glorious. The sandwich happened again on Boxing Day, with the noted difference that now I have to eat my TV suppers on a bench on the coffee table because I’m too fat to bend over and I’m afraid I’m going to squash the baby while watching episodes of Masterchef Australia.

Come on, any recipe with the word stud in the title. A really simple dessert from one of those mini Company’s Coming cookbooks my brother-in-law picked up on a whim on a trip to the grocery store when I was visiting Halifax. And don’t even dare roll your eyes and be all food snobbish about this one. Like you wouldn’t die to go to supper at Jean Paré’s house. When you’re in serious need of a baked dessert but too lazy to commit to anything more than ten minutes of prep, ARE THESE EVER THE DUMPLINGS FOR YOU. Best with vanilla ice cream. If you’re pregnant this will make your baby go full-ninja, so mind your lower ribcage.

For the sauce, combine all 8 ingredients in a small saucepan. Heat and stir on medium until boiling. Pour into ungreased 3-quart (3L) casserole dish. For the dumplings, combine first 5 ingredients in medium bowl. Add milk and cooking oil. Stir until soft dough forms. Drop by tablespoonfuls into cocoa sauce. Bake, uncovered, in a preheated 350° oven for about 30 minutes or until wooden pick inserted in centre of dumpling comes out clean. Serve warm (with ice cream!)

Reheats nicely in oven the next day, if you manage to save leftovers…

Don’t let the idea of prunes and chicken throw you, because this recipe is dead easy and PERFECT. Chop them finely enough and no one will know anyways. Like I did, and then after supper I yelled at Justin, “Ahahaha you just ate pruuuuuuuuunes!!!” As this is a food blog and not a pregnancy blog, we do not need to discuss why I had prunes in the house. 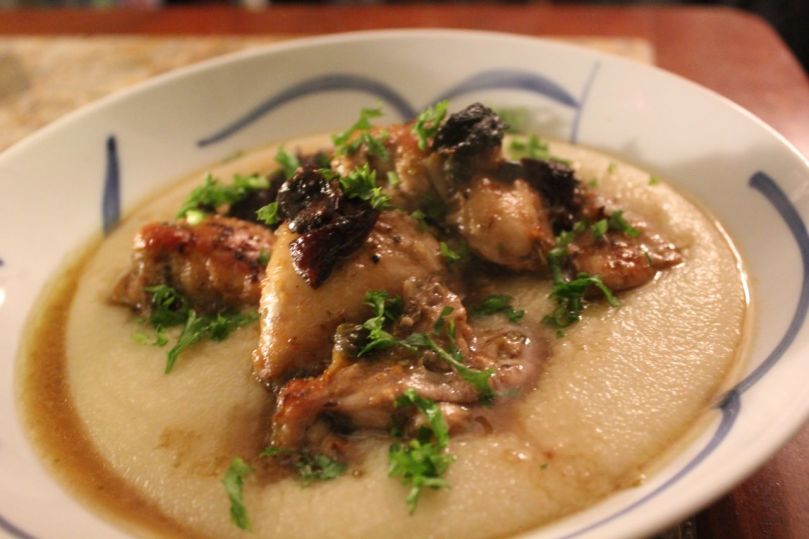 This sounds weird, and it is, but in a lovely sort of way. I made this for our 5th Annual Lamb’s Eve on December 30th. This year’s theme was French, and my friend Celine is from France and came for supper and she approved, so, let’s be real here, I didn’t really care what anyone else thought. Like a pound cake, but lighter, and the olive oil didn’t make it savoury so much as earthy or something? Serve with this recipe for vanilla bean ice cream, or splash out on a nice store-bought one.

(I’m cheating a little here, but I don’t have a picture so I think I can get away with it. Here’s a little shout-out to the very last thing I ate in 2015, and I’m not talking about the three Tums I had before bedtime. We did the tasting menu at Chinched on New Year’s Eve and every course was amazing, but the last one was hands down the best thing I ate all year, and one of the best desserts I’ve ever eaten. Warm chocolate cake with caramel ice cream and a salted coconut macaroon. Sweet Mother. I took one bite and it was so good it made me sad, if that makes sense. Sad that every bite was closer to the last one. My one wish for the new year, after world peace and Donald Trump not becoming president, is that they put this on their regular menu for all of eternity.)

So chickens, here’s to good times in 2016. Wishing you full and happy bellies for the new year! But not full enough that you need a feeding bench like me.    xo