Remember August? When we were still full of hope for what was left of summer? Remember when I had this grand idea of having barbecues and cocktails and ice cream every day off? Yeah…I remember that too. Well, a little. It’s kinda fuzzy because of all the cocktails I had to drink inside because it was too goddamn cold to barbecue or eat ice cream or do anything besides drink in the kitchen wearing track pants, in front of the window so the rain could disguise my tears. 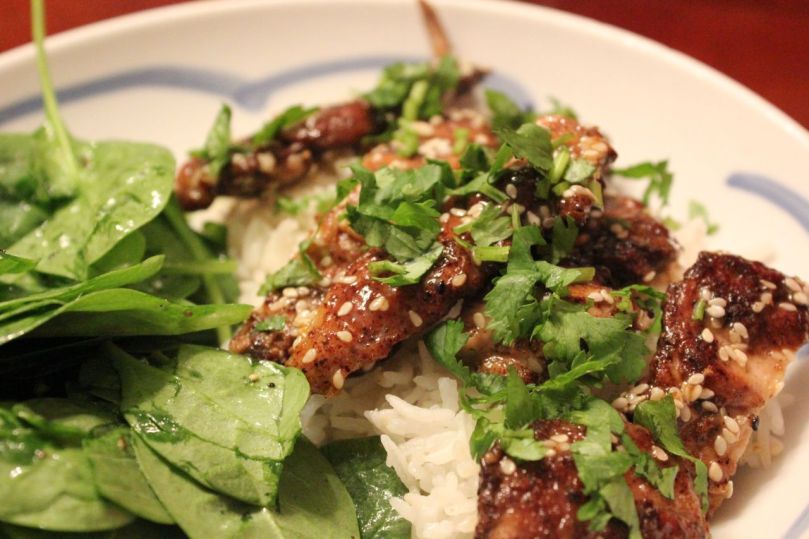 I laugh now when I think of my misplaced hope, and I’m practically rolling on the floor clutching my guts when I remember thinking, after my shows had opened and my days were finally free, “July was great! August will be great too! We are on SUCH a roll here! Woo-hoooo!” And then I think back to that August night when it was 6 degrees with 70 kilometre winds and we did The Merry Wives of Windsor outside for an audience of eleven. I thanked the gods that evening for my woollen breeches; the same breeches I had loathed a few weeks earlier when I was a walking ad for Sweatin’ to the Oldies. Sadly, that was as far as the gratitude got me that night. I looked out at the audience, wrapped up in their winter hats and blankets and sleeping bags. It looked more like Everest base camp than an outdoor summer theatre crowd. I wanted to scream at them, “WHY ARE YOU HERE??? GO HOME, WEIRDOS!” I even cursed my ancestors. “WHY DID YOU COME HERE? WHY DID YOU TRY AND CARVE OUT AN HONEST LIVING FOR YOUR FAMILY HERE, WHY DIDN’T YOU JUST STEAL A LOAF OF BREAD AND END UP IN AUSTRALIA???”

Granted, I was being a little dramatic at the time. It was the combination of Shakespeare and hypothermia. Couldn’t be helped, really.

So, yeah. Fall, hey? It’s really something else. Especially when it happens in August. Oh, July. You were such a terrible, terrible tease. With your sultry evenings and barbecue smells on warm summer breezes and your radio call-in shows with people complaining about the heat. Happy now, arseholes? Before you know it you’ll be shovelling your car out and falling on icy sidewalks and calling Radio Noon to rant about the snow. Probably after you’ve thrown rocks at passing school children and kicked a bunch of puppies.

This year, I’m refusing to be an arsehole (for the record I have never kicked a puppy or thrown a rock at a child except that one time but it was a snowball and he did it first). I’m going to embrace the fall and coming winter. I will skate, ski, snowshoe and toboggan my way into a winter wonderland of goddamn happiness. After I run out and buy aforementioned skates, skis, etc. Or possibly rent. Borrow. Or stay in with a whisky hot toddy and a giant pile of this chicken. 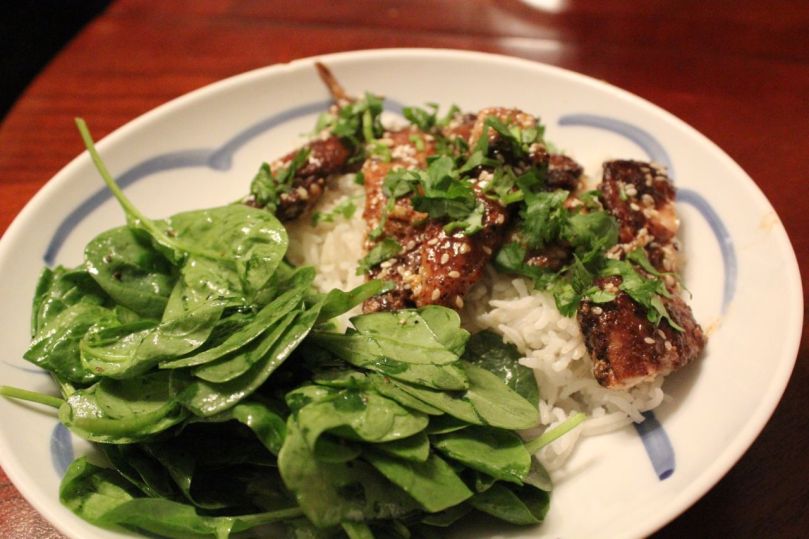 (I was out of sweet chili sauce and used plum sauce. Still very yum.)

On a large sheet of parchment paper, toss the chicken with salt, pepper, and the five-spice powder. Fold over the paper, then bash and flatten the chicken to 3/4-inch thick with a rolling pin. Heat olive oil in a large frying pan and cook chicken, turning after 3 or 4 minutes, until nicely charred and cooked through. Do in batches if necessary. Drain away any excess fat from the chicken pan, put back on the heat, drizzle with the sweet chili sauce and toss with the sesame seeds. 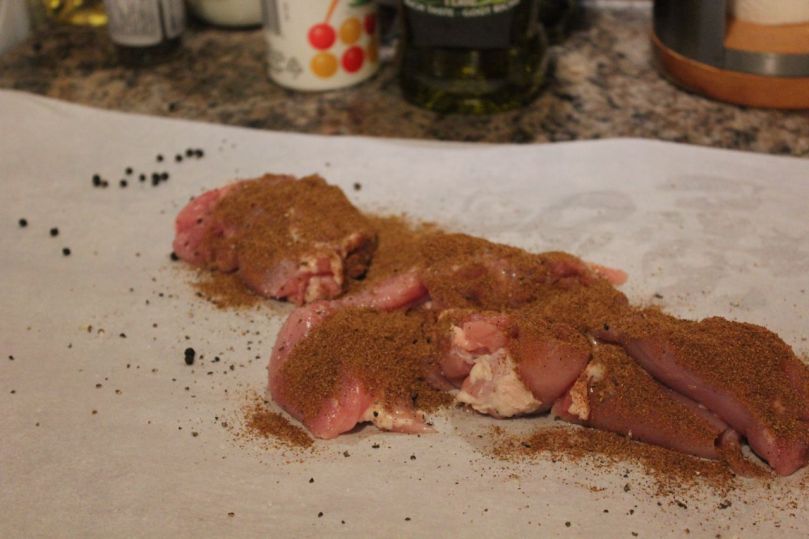 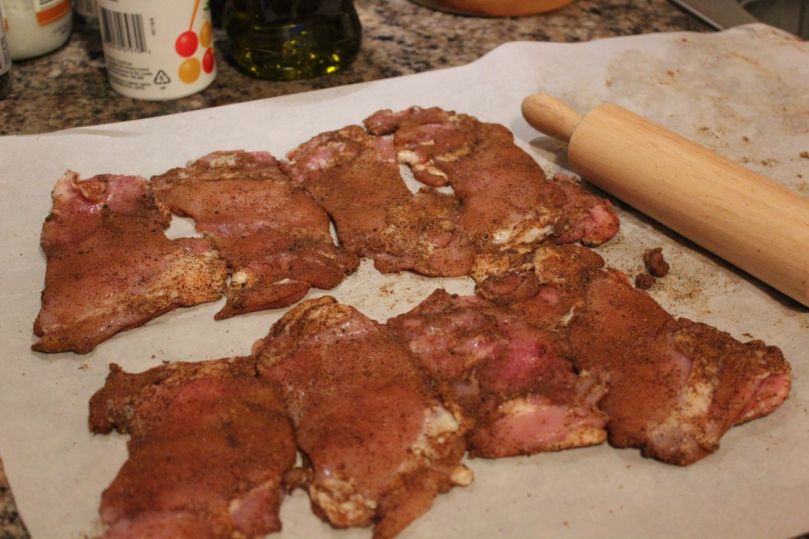 This is super fast, easy, and delicious, and the five-spice powder will make your house smell like Christmas. That’s good or bad depending on how you look at it. A bit of both for me; bad because I dread the holidays, good because it reminded me of being a kid and my Nan’s house. Which outweighed the bad. So I guess that makes five-spice powder a good thing. I’m glad I just figured that out and that you were able to come on the journey with me. 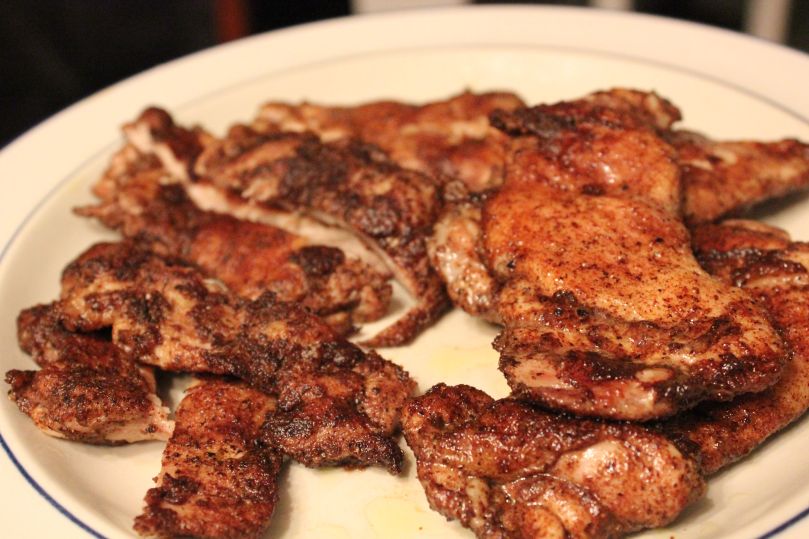 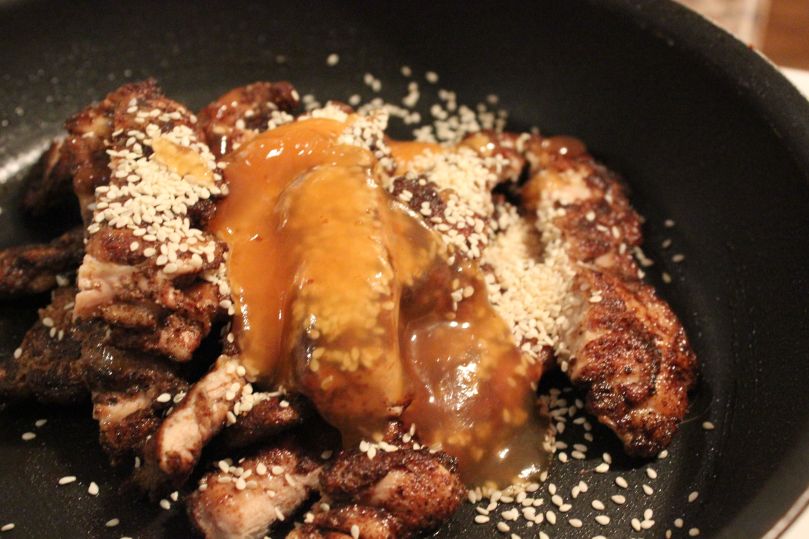 My favourite part of making this recipe was (obviously) the beating of the chicken. If I had a nickel for every time I heard a joke on a cooking show about “taking out your aggression” when you’re flattening the shit out of some kind of meat, I’d probably have enough money to buy an actual meat mallet instead of using a rolling pin. There’s a myth out there that women use meat mallets or rolling pins to take out aggression on ex-boyfriends, shitty bosses, stuff like that. I wish nothing but the best for my ex-boyfriends! Honestly! Except that guy who ran off and got married and emailed me on Christmas Eve to tell me about it. He can suck it. Anyway, when I’m flattening meat I do it extra loud to frighten the two Boston Terriers who live next door. Not that they’re not adorable (in that ugly small dog kind of way), but I like to scare them with sudden noises, just like they scare me with their sudden vicious barking when I’m taking my afternoon sofa naps.

Hey, check it, I just googled Boston Terriers for a laugh and according to Wikipedia, “both females and males are generally quiet and bark only when necessary. Their usually sensible attitude towards barking makes them excellent choices for apartment dwellers.” Hahahahahaha! HA! Some Boston Terrier owner was definitely drunk Wiki-editing. Now I have to log on to Wikipedia and create an account or whatever the hell and amend that to “generally bark only when breathing or when neighbours in attached houses are taking afternoon sofa naps. Their attitude towards barking makes them excellent choices for those living near the arctic circle. And polar bears.” 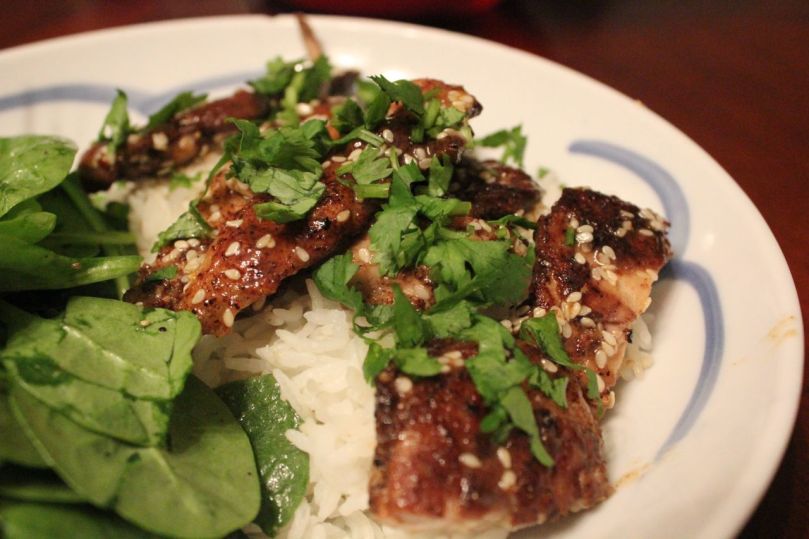 So chickens, I begrudgingly wish you a very Happy Fall. Or, as my friend Susan says “I’m calling it autumn from now on. Fall sounds too depressing.” Either way, enjoy it. Embrace the braising, stews, curries, and afternoon sofa naps. Before you know it, summer will be here!

And you’ll still be doing pretty much the same thing because you live in Newfoundland. 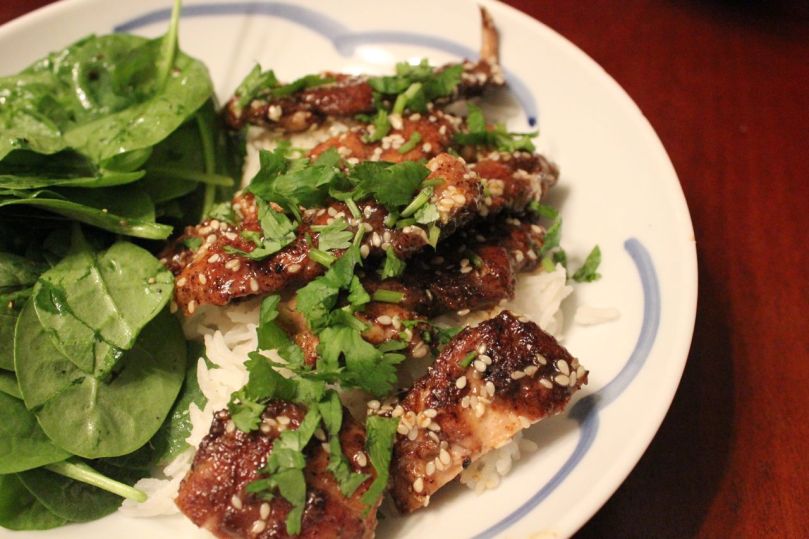 3 thoughts on “This Is Me Trying To Be Excited About Fall.”