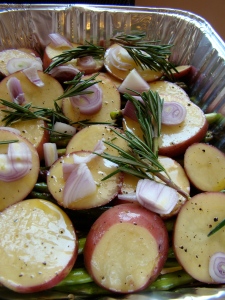 Installment two from the down and dirty streets of London. Leaving the soul-sucking bleakness of a St. John’s winter and arriving in Vancouver in January is one thing. But a freak heatwave in mid March in Ontario is enough to mess with your hardwiring. I’m not a complete idiot, I get how it works, it’s a big country. Winter’s different everywhere in Canada. And it’s the big fat reason why a rundown crackhouse in Vancouver costs a million dollars but you can still nab a sweet little piece of seaside in Newfoundland without completely selling your soul and the souls of your unborn children. But even Ryan Snoddon would have agreed that this was some pretty crazy shit. We arrived in London on a mild spring evening, after a three week run in Orangeville; a place we all felt right at home mostly because it was bloody effing freezing. But spring rapidly turned into a week and a half of summer. In Hanoi. I tried walking around in jeans on day one of the heatwave and got so angry I had to go home and take a nap. The next day I bought some frozen yogurt and a sundress and I felt a little bit better. I ditched the sneakers for my flip flops, the ones usually reserved for walking around on questionable hotel carpet. 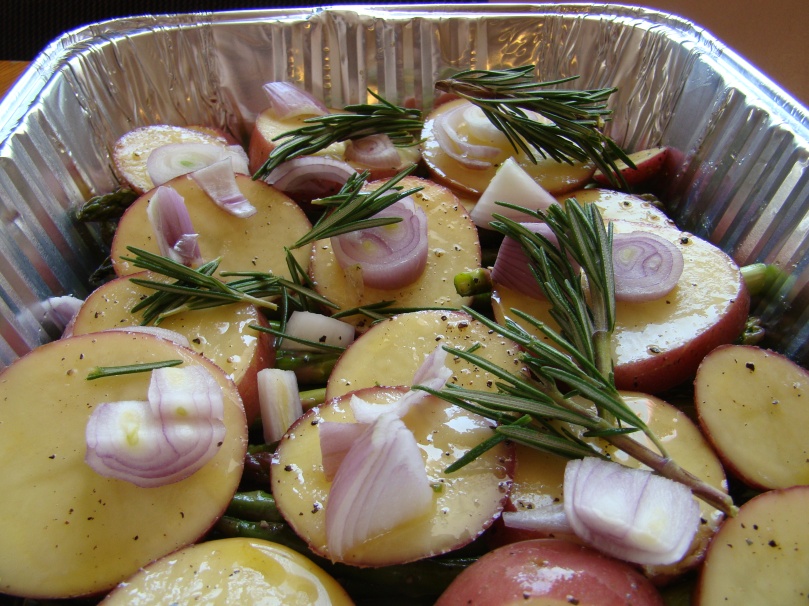 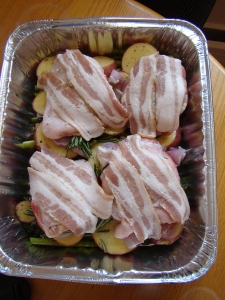 My biggest obstacle that week was cooking in the heat. On arrival in London I made a trip to the grocery store and bought supplies for the next three weeks. Lots of cheap and easies, meat and potatoes, stuff I could toss in the oven and bake with as little fuss as possible. I ate out a lot in London; it’s a great food city. Especially when it’s 28 degrees and you can lounge outside on a patio and drink pints of cold beer. But there was still a ton of food in the fridge and freezer that had to be eaten before we flew back to Newfoundland. So I found myself standing in a hot kitchen on several occasions, roasting something in a 400 degree oven and wondering how the hell people who live in Florida manage to cook anything at all. Or work in bakeries. I think if I lived in a place that was tropical all year round I’d just eat cold food unless someone else was cooking for me. 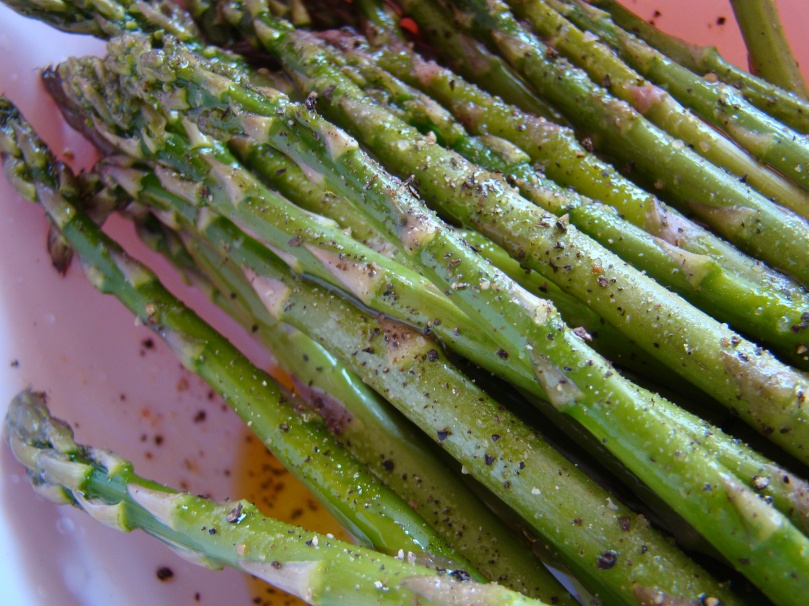 Karen had some really nice fresh asparagus and a bunch of chicken thighs in the freezer. One 25 degree afternoon I asked her if she was up for being a chicken-asparagus bake guinea pig and she agreed. She was probably in her glee that someone was stupid enough to cook something for supper. She went to take a nap. I put on the sundress I’d been wearing for the past five days and got to work. 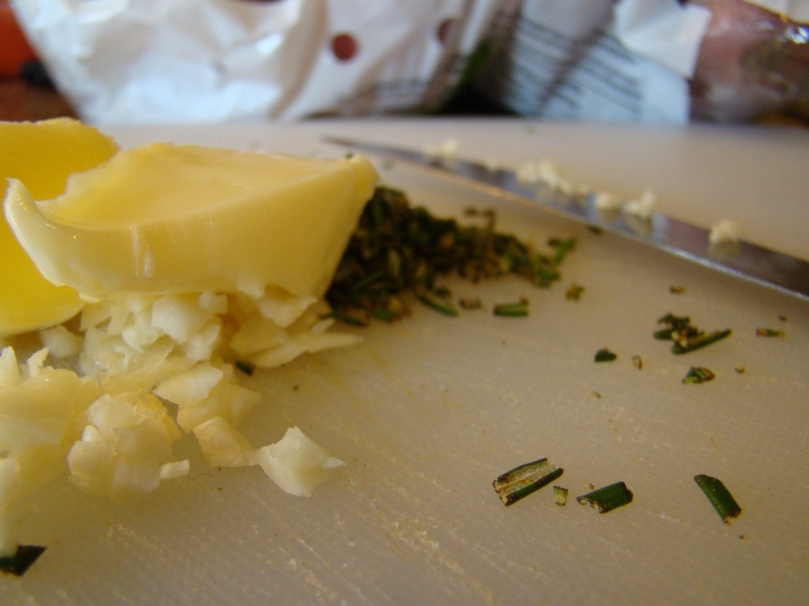 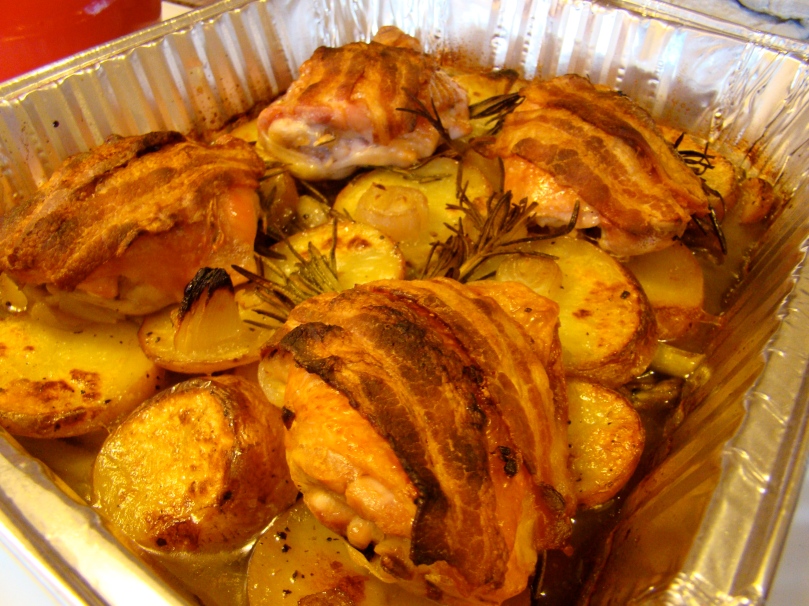 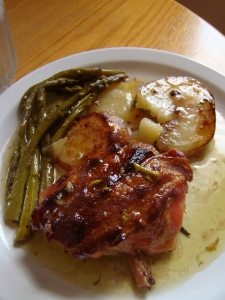 Give this a go when it’s winter and turning on the oven doesn’t make you crooked as a tied up bag of sweaty weasels. Trim the tough ends of a bunch of fresh asparagus and toss with olive oil and salt and pepper. Do the same with some sliced red potatoes. Lightly grease a roasting pan with oil and line the asparagus on the bottom of the pan followed by the potatoes. Toss on a few sprigs of rosemary and some chopped shallots. Finely chop a few cloves of garlic and some rosemary and mix with a tablespoon or so of butter. Rub the butter mixture under the skin of four chicken thighs. Cover the thighs in slices of bacon (hey I’m Paula Deen) and place them on top of everything in the roasting pan and pop into the oven on 350-375 degrees (depending on your oven, this one was super hot and I had to turn everything down to 325 at one point). Bake until potatoes are tender and chicken is cooked through. Try not to overcook like I did. A really tasty easy meal for winter, or a mildly alarming bout of global warming in March. 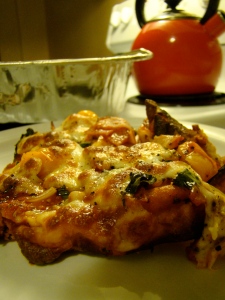 Last night of the heatwave and we headed out for a few pints after the show. The idea of walking home at night in a t-shirt is still sort of a novelty to me; after nine summers on the Northern Peninsula I always forget what it’s like. It felt like Thailand or something walking home that night, I swear to God. Anyways, when I got back to Executive not-so Suites it was too hot and sticky to live. I was starved, there was garlic naan bread in the fridge and Karen was already in bed. I took off my pants and started to fashion myself a little midnight snack. Homemade pizza is hard to beat. Most times, not really a practical option though. I’m a sucker for those mini pizzas you can throw together in a couple of minutes, like on pita bread or a tortilla or if you’re really going old school, hamburger bun halves. With cut up wieners for toppings. Your mom did it too, don’t even try to deny it. But my favourite quick pizza crust by far is naan bread…the stuff you get at the grocery store that’s ready to go. Try the President’s Choice garlic stuff and you won’t ever look back. Except maybe fondly at wieners and hamburger buns. Use whatever’s in the fridge. I had some really nice farm fresh mozzarella from Covent Garden Market (the other one) and a ton of veggies that needed to be used. No pizza sauce but Karen had a bottle of Ragu and that got it done. I was standing in the kitchen in my underwear and using Ragu. I feel I could most definitely host my own cooking show. 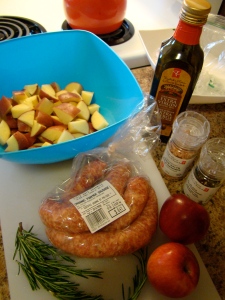 The heat wave ended eventually and we had to go back to our winter woolies, trading flip flops for boots when it started to snow. I always thought that St. John’s won for weirdest weather, but I’ve learned my lesson. Didi and I took a little overnight trip to Stratford (the other one) to visit friends on our day off and it was freezing cold. More seasonable for something roasty in the oven for sure. Walking home from the train station in London that afternoon we stopped at the market to eat Thai food and homemade ice cream and pick up some food for a nice supper. I found a butcher shop with all organic meats and bought some gorgeous farmer sausages…I’ve often said in a perfect world I’d love to eat nothing but fish, game, and meat that was happy in its former life. Not always easy on the wallet, but you know, nice to know the cows and pigs got to be silly and roll around in the grass a bit. 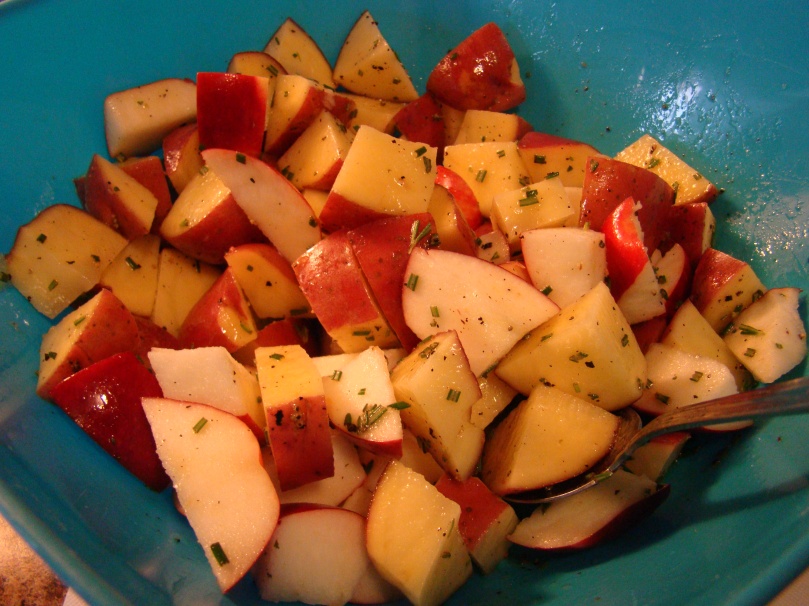 Another one-pan wonder from Executive Suites. This turned out to be a meal I’ll make all the time, if I can ever learn to not cook meat within an inch of its life. According to what I hear from pals this is a common worry if you’ve been raised by a NL mother or grandmother (I didn’t eat a steak that wasn’t well done until I was 29). But man, pork’s a different story. Anyways, onwards and upwards, I’ll get there. I chopped up some potatoes and an apple, tossed them with olive oil, salt and pepper, some finely chopped rosemary and a squeeze of lemon juice. Threw it all in a roasting pan and put the sausages on top. 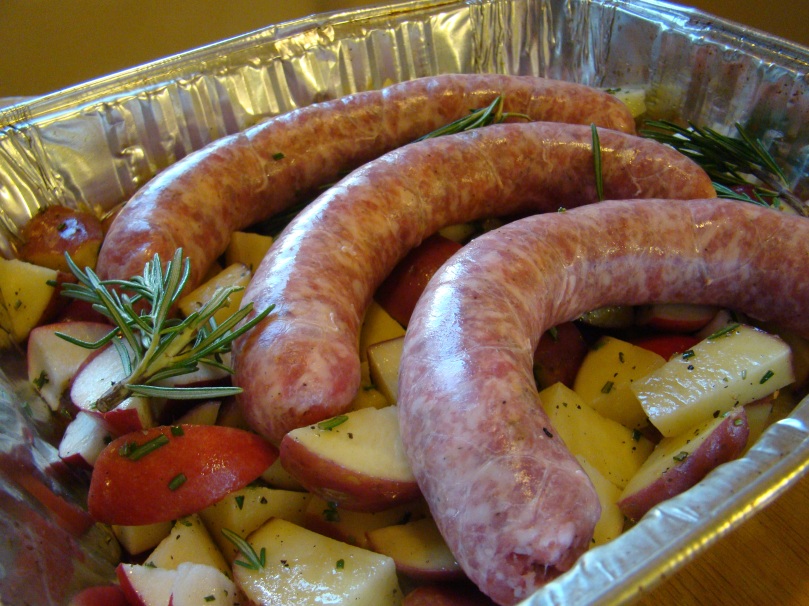 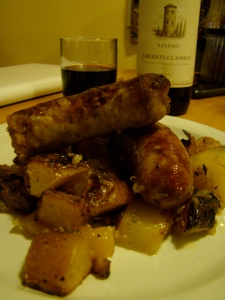 It’s all a bit of a blur after that…the temperature was too hot and the smoke detectors went off five minutes into the baking time. I spent the next half hour running back and forth from the oven to fanning the smoke detector, one shoulder to my ear to try and block the screeching, one hand fanning with a tea towel and my other hand wearing my winter gloves (no oven mittens). I gave up, took out the sausages and finished them off in a frying pan while the potatoes roasted a bit longer in the oven. Not exactly a one-pan wonder I guess, and things were overcooked and a little burnt around the edges, but mother of God the potatoes were really something else. I’ve heard that potatoes being roasted in duck fat are a big thing in England and I’m guessing that having them roasted in sausage fat might be the next best thing. Although duck fat has a prettier ring to it than sausage fat does. But hey, baby pigeon meat is called squab and people still eat that. Myself, I’ve never eaten squab. I would definitely try it, just to see what happens to a person’s face when I say “I ate a really nice squab there the other day.” 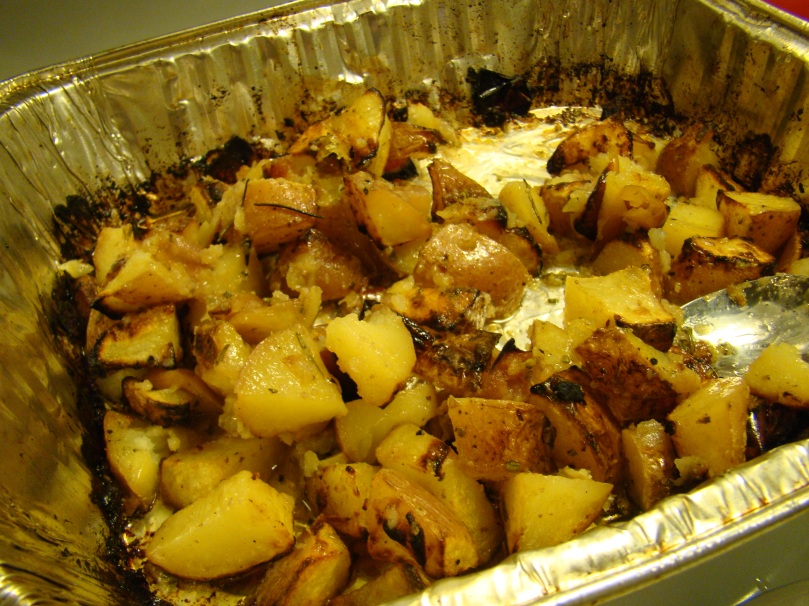 I haven’t cried over breakfast since the time our Newfoundland dog died when I was a kid and Mom eased me into it by telling me over chocolate chip pancakes. I came close the next morning when I ate these potatoes. Try frying them up in a pan with some eggs and eating them like hashbrowns. Something about the tang of the lemon juice and apples all loved up together in the sausage fat. Holy squab. 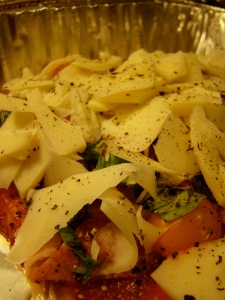 Absolutely baked in London and home again. Not really home-home, just Newfoundland home for now. No little red kitchen for me til this summer so the kitchen at Shark Cove Suites in Port-aux-Basques will do for now. There’s no can opener here either, but there are deadly moose burgers downstairs at the restaurant and a view of the ocean out the living room window. Off to Halifax this weekend and then back again to brave the Trans Labrador Highway. Hilarious, disastrous food adventures to follow, no doubt detailing flat tires and boil-ups on the side of the road. It’s a good think I kick ass at making bannock.