Week 52. A whole year of experimenting wrapped up with one final feast and the christening of a new holiday. Ever since I bought my place four years ago I’m getting a kick out of inventing new traditions. Like putting up my tacky powder-blue Christmas tree, so ugly it would make you weep. But when it’s all decorated and lit up, a Christmas miracle happens and wisemen start showing up at my house with myrrh and other assorted goodies. That’s how beautiful it looks, shining out the living room window in all its made-in-China glory. Another tradition was born when Mel and I were sans family this holiday season so we drank Bailey’s all day and made curry and samosas instead of a turkey. I loved it so much I’m doing it again next year. 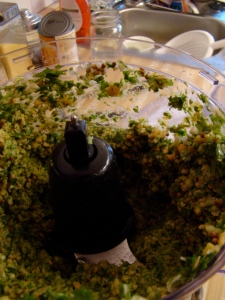 So it was that December 30th became known as Lamb’s Eve in the little red kitchen. I wanted to have a crowd over for the last new recipe of the year; it needed to be a mildly impressive meal that would involve my new KitchenAid roaster (it’s the same colour red as my kitchen and makes me happier than licking a bowl of cake batter) and my brand-spanking new food processor (from Santa, he’s younger and cuter than you think). Admitting I’ve gone without one for so long is a little embarrassing, but then I think about how I made that flourless chocolate cake with a smoothie blender and I feel like MacGyver. Whatever I chose to make had to be marinated in something fun and it had to be big enough to fill the roaster. Lamb. There’s a celebratory piece of meat for you.

A Jamie Oliver recipe I’d been wanting to try forever. Jamie suggests strolling down to your local butcher, getting him to butterfly a fresh leg of local free-range meadow-fed certified very happy lamb, and picking up a fresh bouquet of flowers and a bottle of red from the shop on the way home. Or in my case a twenty minute walk to Sobeys in a blizzard and back, frozen New Zealand lamb legs, a giant butternut squash and two bottles of wine weighing me down like a sherpa on the walk home. And not a flower shop in sight. The idea of deboning and butterflying a leg of lamb was laughable, even after a half bottle of wine and some youtube tutorials, so I splurged on boneless. They looked smallish and I bought two to be safe; I was planning on feeding close to ten people and running out of meat is a pretty fast way to ruin a party. I figured this way if we had too much everyone could take home leftovers for cold lamb sandwiches.

The food processor? She got broke in real good. Lamb and marinade prep turned out to be the most exciting event the little red kitchen has seen thus far. Between the mess of blood on the counter and the big plastic bag for the meat, it looked alarmingly like an episode of Dexter. I hesitate to use the word “butterfly” to describe what I did; I took my sharpest knife and cut until everything lay a little bit flatter. I could hear that Australian guy from the youtube video yelling at me, but I only had a couple of hours of marinating time and I was desperate. I was doubling the recipe and I was so excited about my new food processor that I overfilled it. Everything was so green and pretty and fragrant. I kept sticking my finger in it and licking and thinking how great I was. I took the blade out and lifted the plastic handle to pour the marinade into my bag of lamb. Oh yeah, there’s a hole there. A cascade of green on the counter, down the cupboards, onto the floor. Me screaming, “No, no, no, NO!!!” There was nothing to do but move fast; I grabbed what was left in the plastic bowl and heaved it into the bag of lamb, throwing the bowl aside and grabbing the bag before it toppled and spilled on the floor. My only regret now is that I was alone and couldn’t get any action shots. 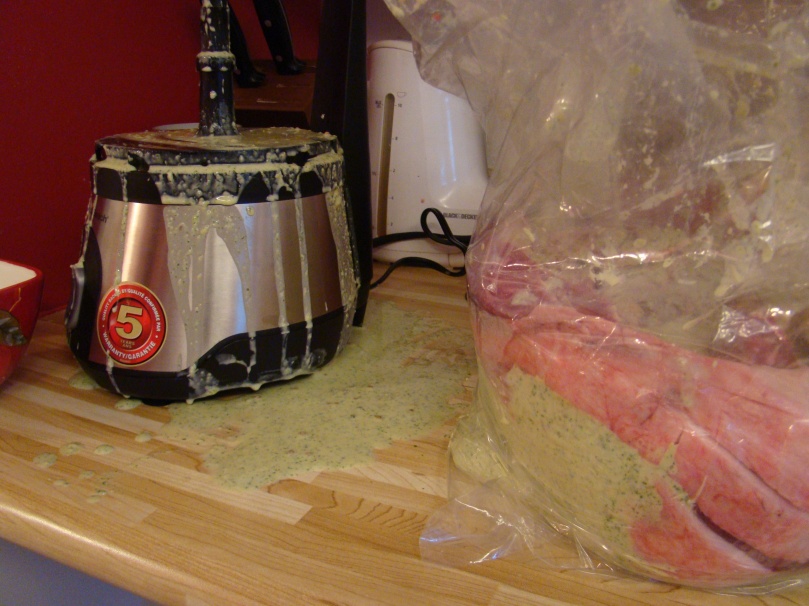 Score the lamb on both sides. Using either a mortar and pestle or a food processor, grind or whizz up the coriander seeds with the garlic, cilantro, mint and half the chickpeas until you have a paste. Season these paste or “marinade” with salt and pepper, then add the lemon juice and yogurt. Place half of this flavoured yogurt in a large plastic bag and add the lamb. Place the other half, covered, in the fridge. Tie the bag up to seal it and turn it around to allow the yogurt to coat all the lamb. Leave to marinate for at least an hour but up to 24 hours in the fridge. Preheat the oven to 400F. Place all the veg, chickpeas and garlic in roasting pan then sprinkle with the cumin, salt and pepper. Drizzle with olive oil and toss together to coat. Remove the lamb from the marinade, then place the meat directly on the oven rack with the pan of vegetables on the shelf below. Cook for about 1 hour, tossing the vegetable halfway through. Serve the lamb well cooked with the veg and flavoured yogurt on the side.

Belbin’s saved the day yet again. I didn’t even attempt Sobeys on the day before New Year’s Eve in my quest for fresh mint and cilantro and the lead up to the great food processing massacre of 2011. Chickpeas went in the marinade but not in the pan. I underestimated the super power of my new roaster and didn’t think there would be room so I left them out. I heard it laugh at me when I shut the oven door, but time was getting short and I had to shower. And it was a hair-washing day so there was no time to futz with garbanzos. That may be the weirdest sentence I’ve ever written. I don’t even know what a baby turnip is so I bought sweet potatoes instead. I did however think of Nell who loves to make fun of us settlers on the other side of the pond because what we NL’ers know as a turnip is actually and scientifically a swede or a rutabaga. I wondered how it evolved that way until I scientifically decided that rutabaga is just a silly word. Can you hear your nan or pop saying “rutabaga”? Neither can I. Discussion over.

Here’s the thing with the actual cooking of the lamb. Jamie suggests placing the meat directly on your oven rack and letting the pan of veg catch the drippings below. That’s fine and dandy if, along with your local butcher and flower shop, you have a kitchen staff to clean up your shitty mess afterwards. I thought about it for three and a half seconds. That’s probably how long it would take the smoke detectors to go off as soon as the meat hit the oven rack. In addition to my fire safety concerns, out of the five tenants who lived in my house between May and October, one kind soul had cleaned the oven (which sort of makes up for the fact that I still can’t find my shovel or favourite cereal bowl) and I just didn’t have the heart for it. For the sticky burnt mess I knew would happen. So I put the lamb directly on top of the all the vegetables. They didn’t roast so much as turn into a stew, but I didn’t have to use my fire extinguisher.

A tasty recipe to end the year.  Minted couscous on the side and Sandy and Didi brought some lovely salads. Dessert wasn’t new but a different version of a now favourite recipe. If anyone remembers the chimney sweep’s gelato blog from a few months back (homemade vanilla ice cream with espresso and whiskey), this time I gave the Jamaican version a try. And if anyone looked up the other meaning for Jamaican chimney sweep, I’m referring to the version with rum and not the one with the sock and the handstand. 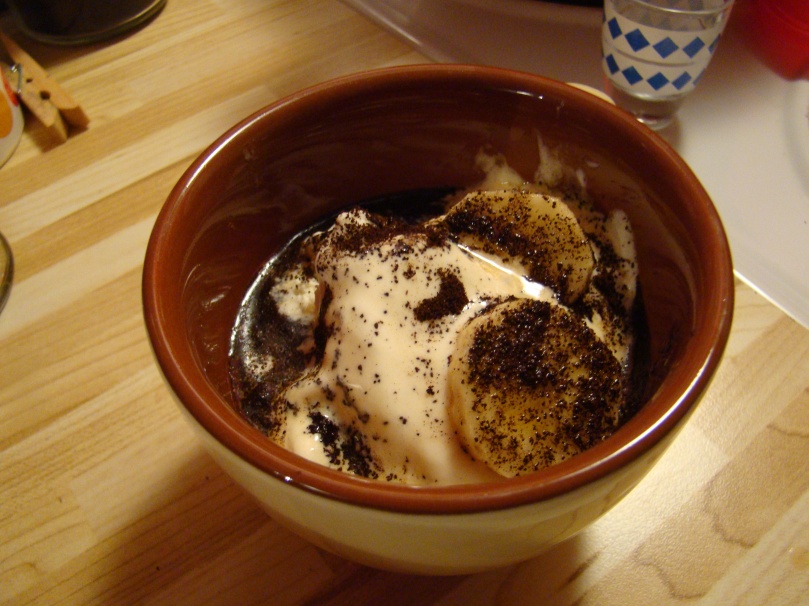 There you have it. Fifty-two weeks of food, friends, successes and a couple of fun failures. A new holiday! Lamb’s eve! We decided that night to do it all again next year and every year after. December 30th. Same pals, and maybe a few more. A different lamb recipe perhaps, hopefully no cataclysmic mess to clean up. But lots of booze and food and a crowd to steam up the windows in the little red kitchen. And that makes this little chicken very, very happy. 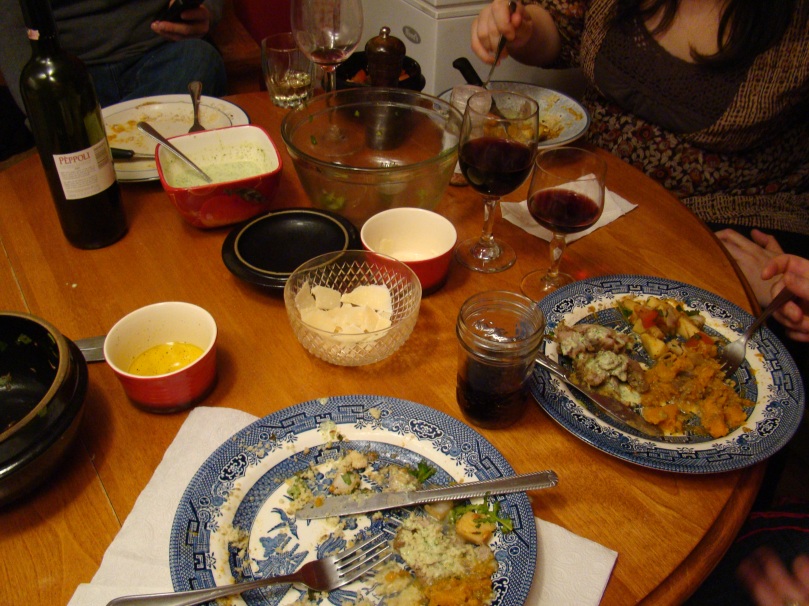 10 thoughts on “Out With a Bang: Moroccan Lamb and a Lesson in Food Processing”