I never go to weddings. It’s sort of like, my thing now. Not because I’m not a fan or anything like that, but for some silly reason, everyone wants to get married in summer. Personally, I don’t see anything wrong with a wedding in January in Newfoundland. Imagine all the photos people miss of bridesmaids standing knee deep in slush, or losing out on the chance to get salt stains on your wedding dress. I just don’t get it. My beef with summer weddings is that I can never go to them. I haven’t been to a summer wedding since Uncle Craig got married in 1993. I wore that cute little number from Smart Set in the Labrador Mall and broke it down hard core to such favourites as The Bird Dance and Mony Mony. My May to Septembers are now spent working theatre festivals, with only Mondays off and no room for nuptials. When my sister was trying to plan her post-elopement wedding reception last summer she asked when I could make it. I said “Monday.” She sighed. So I sent in a little video and that was nice.

I can’t say I was entirely surprised to miss the marriage of two dear friends, Katie and Duncan, this past September. Sorely disappointed yes, but not surprised. The fact that I arrived in town the very next day still makes me wish I had been a marine biologist. But food fixes everything, even missing important life events, so when I was home and settled in the fall I had them over for a nice meal as a belated wedding present. Nothing too fancy; Katie and I were in the middle of rehearsals for a children’s show and I was a tired crooked beast. My plans for a crack at coq au vin turned into a pretty simple roast chicken, but with those nice potato-berry clouds I wrote about a few months back. And I did manage a new appetizer and dessert to keep things mildly stressful. 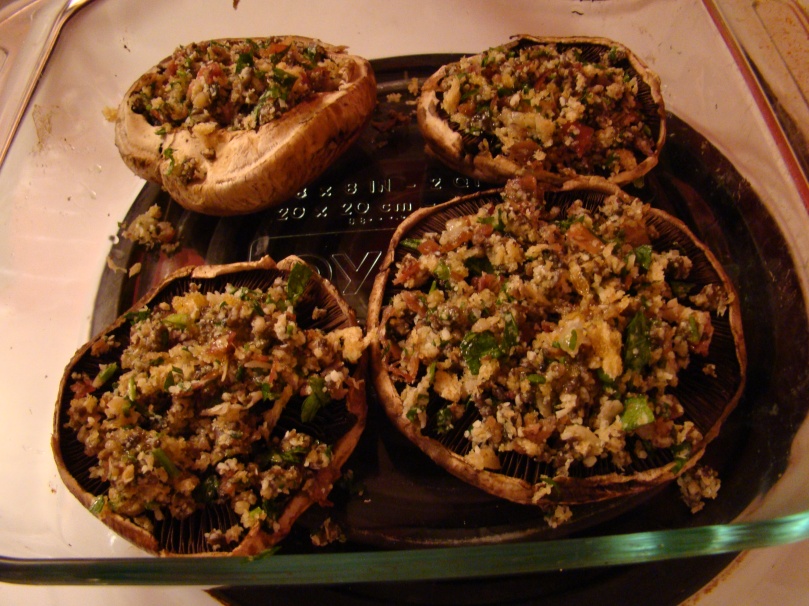 Preheat the oven to 375F. Oil a baking dish. Remove the mushroom stalks and finely chop them. Heat 1 tbsp oil in a frying pan, add the prosciutto, garlic and mushroom stalks and cook for 5 minutes. Mix in a bowl with breadcrumbs, Parmesan and parsley. Brush the mushroom caps with 1 tbsp olive oil and place them gill-side-up on the baking dish. Divide the stuffing among the caps and bake for 20 minutes. Drizzle with the remaining olive oil and serve hot or warm.

These things look fancy, taste fancy, and are dead easy. I’ve made/eaten a lot of stuffed mushrooms, but there’s something about prosciutto that will make you and the mushrooms light up a little bit more (I used Piller’s smoked prosciutto…salty and smoky, you won’t need to season the stuffing mixture). I’d eat these as a main, maybe with a salad and a nice glass of white (shut up chicken).

I discovered last summer while living in Cow Head that I could watch Food Network cooking shows online. I don’t have cable at home (a little righteous, mostly cheap) but I’ve always said that if I could custom pick my cable (which should be allowed, seriously) I would choose two channels: the Food Network and TLC. On snowy days I would hole myself up in my house and cook everything I see on TV and then eat it while watching episodes of Say Yes to the Dress and I Didn’t Know I Was Pregnant. And until I can reach those heights of perfection, I will continue to come home from work in the summertime, make a couple of hot dogs, open a beer and watch my favourite food shows on a laptop.

Sophie Dahl. She’s so good looking it’s not really fair that she can cook too. I was pretty skeptical when I found out she had a show on the Food Network. I get my back up a little when models decide they want to be actors, but when models decide they want to host cooking shows? That’s just immoral. Like when Gwyneth Paltrow got to do that food tour of Spain with Mario Batali. What the hell macrobiotic vegetarians eat in Spain is what I’d like to know. Gwyneth? Anyways, I rolled my eyes a little while I ate my hot dog and clicked on The Delicious Miss Dahl. Turns out all her food looks as good as she does. She kind of makes you want to curl up with a cup of tea in her cozy English kitchen and have a chat while she makes you borscht. There you have it. Models can cook too. But I still don’t think I could hang out and eat hot dogs with Gwyneth Paltrow. 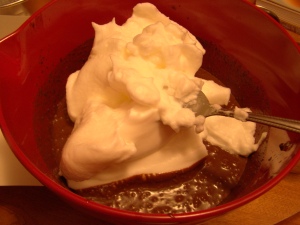 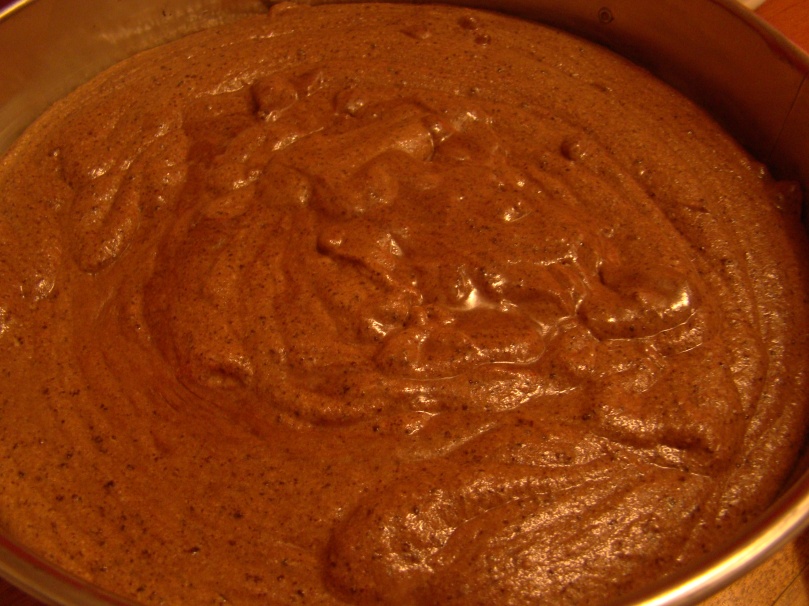 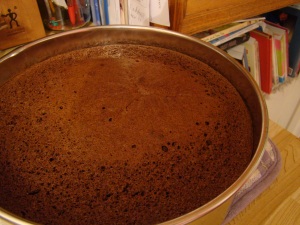 Grease and line the base of a solid-bottomed (heh heh) 23cm/9inch round cake tin (a springform is best). Preheat the oven to 180C/350F. In a large food processor, pulse the chocolate and sugar until fine. Add the boiling water, butter, egg yolks, coffee powder and vanilla extract. In a glass bowl, whisk the egg whites until stiff and then fold them into the chocolate mixture. Pour the mixture into the prepared cake tin and bake in the hot oven for 45-55 minutes. The top will be cracked like a desert fault line (dessert fault line ooh, hee hee). After you take the cake out of the oven it will collapse into itself quite a bit. This is ok. It’s not meant to be a proud cool cake, it’s meant to be slightly rough around the edges (like Sophie…ha!) and the creme fraiche and berries will hide any dips and cracks. Let the cake cool then put it in the fridge for a few hours. When you are ready to serve, remove from the tin, smother the top in creme fraiche and pile the berries on top. You can also grate some chocolate on top or dust with icing sugar. 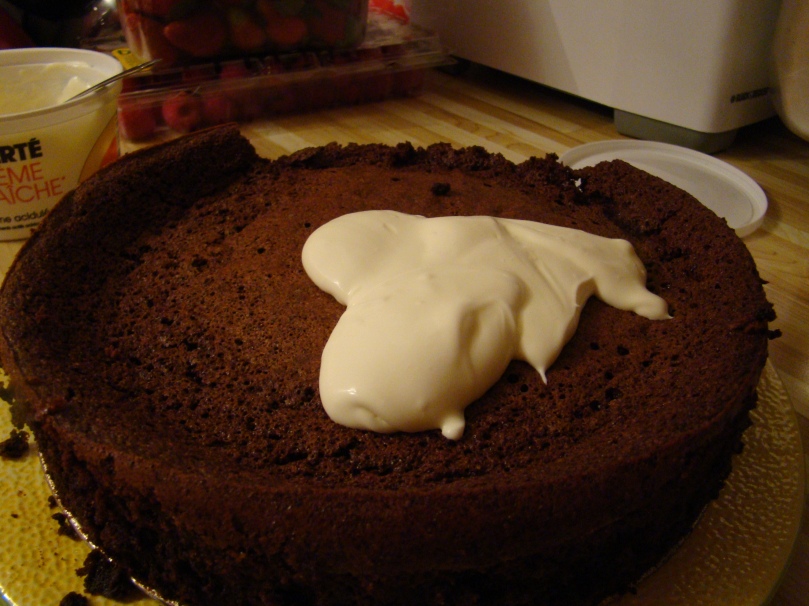 This cake is perfect for so many reasons; it easy, it looks amazing, it’s gluten-free without even trying, and it’s the prettiest, most decadent thing you will ever lay eyes on. Sophie suggests a red-berry cake with red currants, raspberries and strawberries or a blueberry/blackberry one. I liked mixing up the colours and piled blackberries, raspberries and strawberries together. The only blueberries I had were in the freezer and I don’t think frozen berries would work very well for this one. And red currants? Hilarious to even think they could even be found in these parts. It will fall apart and maybe even crack off in pieces but like Sophie says, all the mistakes can be easily covered up. The cake is sweet and rich but the tangy creme fraiche and unsweetened berries even it out. You’ll find surprise chunks of chocolate in it (especially if you have no food processor and have to do it in batches in your smoothie blender-ahem) but I can think of worse things to find in a piece of chocolate cake. Here’s the link to the video if you want to watch Sophie make it. You’ll feel a little inadequate but a hot dog and a beer will help. 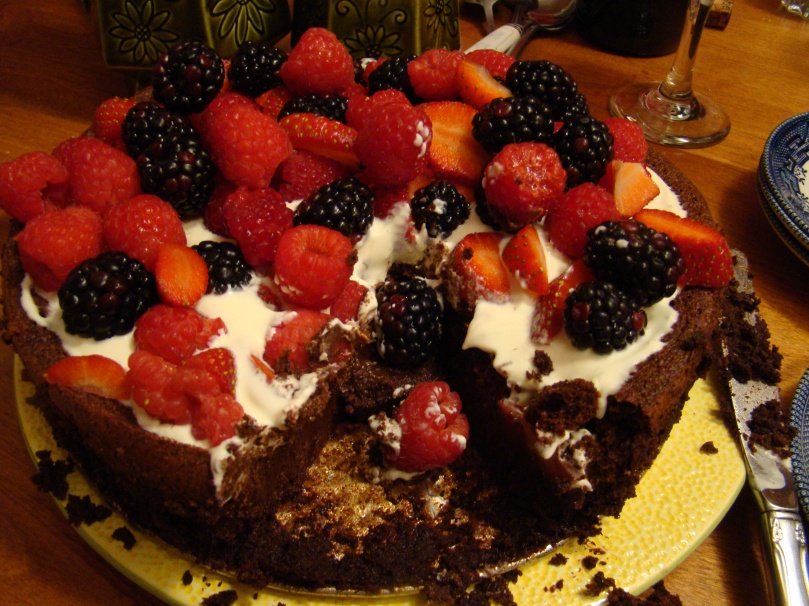 Stuffed mushrooms and chocolate cake might not be able to completely make up for missing a wedding (hot dogs?). But no one will complain when you invite them over for a good meal to make up for the fact that you weren’t there. If they actually remember that you weren’t there. Which they probably don’t. Maybe they should be making you a meal. That’s kind of mean, but hey, I missed my sister’s wedding, I’m a little immune. And at the end of the day, if it was me tying the knot, I’d rather get a flourless chocolate cake than a gravy boat.