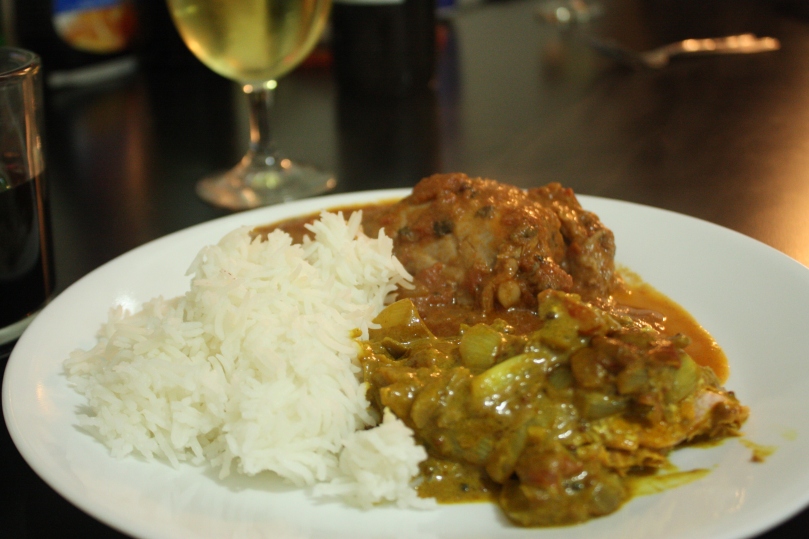 Not the last supper or anything, just the last week in the weird eggshell-coloured kitchen. I can’t say I’ll miss it as much as the view from the back step, but there were a lot of great meals and friends made this summer and a lot of empty wine bottles to show for it. A little behind on recipes this week, so I decided to combine them into one last farewell dinner to our sweet Cow Head. It’ll be nice to be able to buy avocados again, but I’d give up avocados any day for a walk on Shallow Bay Beach. I can’t believe I just said that. 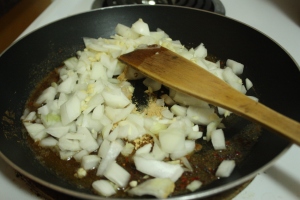 The Spice Library survived the summer and amazingly still had punch enough left for two more pots of curry. Earlier in the summer Didi had made a pot of chicken lababdar that slightly altered the state of my thinking when it came to cooking in rural Newfoundland. There will always be cream at the local Riteway (if you get there on Thursday when the dairy truck arrives…you might be pressing your luck by Monday). There will always be tinned tomatoes. If you bring the spices, Cow Head will do the rest. Or you can do the rest in Cow Head.

I wanted to try the chicken lababdar on my own and this was my big chance. I had everything for it except fenugreek seeds. Brown mustard seeds would have to do. Seriously, right? The horror. Lindsay emailed to say she had a trout in the freezer to donate to the farewell feast and could I do something with that? The wheels began to turn, the internet search continued. Yes! I could do something with that! I found an Indonesian trout curry recipe online that I more or less had all the ingredients for except…fenugreek seeds. But I did have ground cloves. Cloves would make me forget about having no fenugreek seeds, anything with cloves in it had to be exotic and excellent, much like the ladies I was having over for dinner. Lindsay emailed back ten minutes later. What she thought was a slab of frozen trout was actually a salmon fillet. Shit, did people even curry salmon? How could I not know this? Google. Yes. Curried salmon recipes did in fact exist. We would use the trout recipe with the fillet of Captain Highliner frozen salmon, cross our fingers and hope for the best. Cow Head’s Curry Night 2011 would kick ass. With or without fenugreek seeds. Goddamn it. Ginger. I needed fresh ginger. There was that massive chihuahua-sized piece Didi had bought in June. Perfect. There was one small piece left, I remembered seeing it underneath the pack of ground coriander. Found it! Jesus, I didn’t even know mould could be that colour. Ground ginger it would have to be. My cheeks started to flush. The ladies would be here in three hours, the chicken was frozen, the ginger was orange and fuzzy and no fenugreek seeds, have I mentioned that? But there were a few bottles of wine and I had spent most of the afternoon making earl grey cupcakes with lemon buttercream icing. If wine and cupcakes didn’t solve all my problems, there wasn’t much hope for the universe. I felt better. I rubbed the salmon in salt and turmeric, left the chicken out to thaw, ate two cupcakes and went to work.

Burst in through the door at 8 o’clock. The ladies were due to arrive in half an hour and that was exactly how much time I had to get the house smelling like curry. For all the panicking I did before I left for work, the two recipes weren’t that difficult. It took a while to get through chopping all the onions and garlic, but I managed to get supper ready a mere a half an hour behind schedule. Quite a feat, as I’m usually the person who invites you over for supper at 7 and gets you fed by 9.

Adapted from The Creative Pot (www.thecreativepot.net) 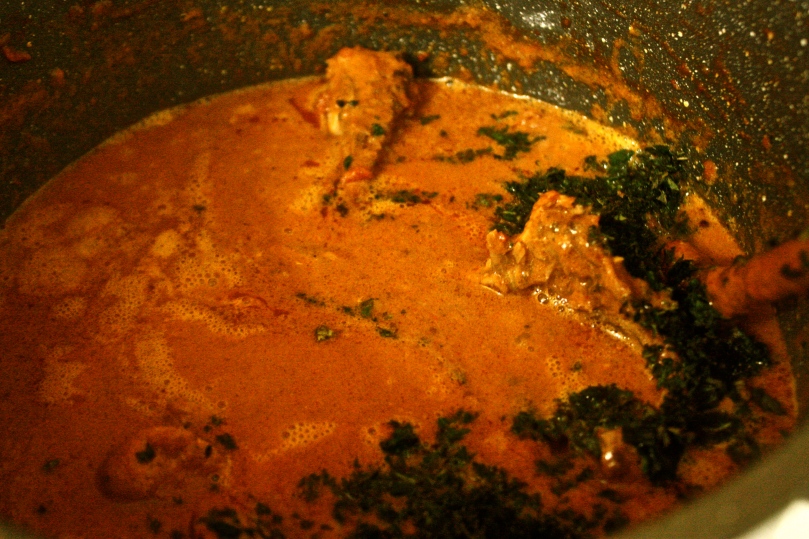 Heat oil in a large saucepan over medium-high heat. Add onions and cumin seeds and fry for a minute or two until fragrant, then add tomato paste and tinned tomatoes. Cook for 6-7 minutes to reduce and thicken slightly, then add ground cumin, fenugreek, garam masala and chilli powder. Stir through before adding the chicken pieces. Cover and allow to cook for 5 minutes, then turn heat down and allow to cook for a further 5-7 minutes or until chicken is cooked through. Stir cream and butter through, allowing the butter to melt. Season to taste with salt and serve warm topped with tomatoes and coriander. Serves 4. 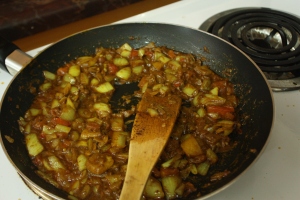 Rub the trout fillet with turmeric and salt and set aside in fridge for a couple of hours. Make an X on the chestnuts (so the steam can escape) and roast them in the oven at 250 F for 20 minutes. Let cool and chop them roughly. Heat one teaspoon oil in pan and lightly saute the fillet on each side. Set it aside. Heat the rest of the oil and temper it with cumin seeds, fenugreek seeds and dried red chilli. Add the ginger and garlic and saute for 2-3 minutes. Add the sliced onions and saute til they are translucent and then the tomatoes and mix well. Add the rest of the spices to the pan, followed by the coconut milk and mix well. Remove from heat and set aside. Place trout fillets in a baking dish and pour the coconut and spice mixture over the fish, followed by the chestnuts. Bake at 300 F for 20-35 minutes of until fish is completely cooked.

(I forgot to saute the fillet before I baked it. Everything was still delicious, but maybe a quick sear would bring out more flavour. Next time…) 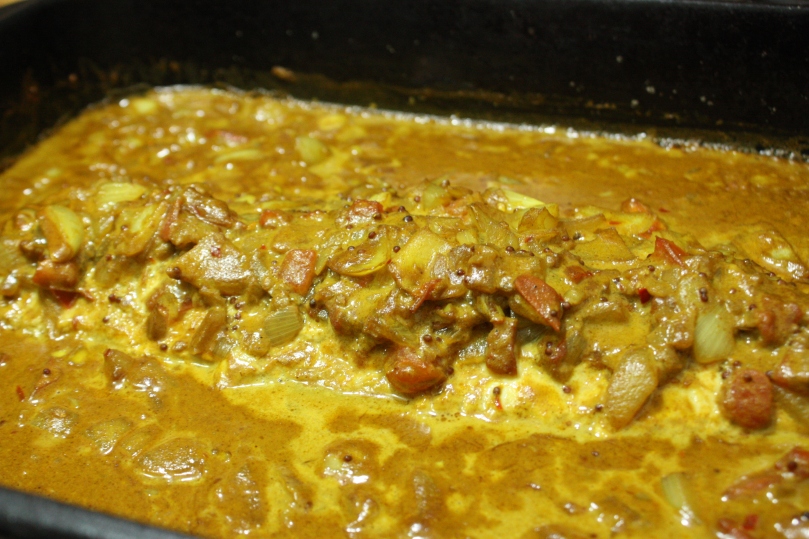 I was missing a lot of the ingredients (I laughed out loud when I read chestnuts). No aforementioned fenugreek seeds (used mustard), no cumin seeds (used ground), no coconut milk (used powder), no coriander (used wild mint), no chestnuts (ha…chestnuts), so needless to say I was running around the kitchen like a little red chicken with her head cut off. In my haste to get the house good and smelly before the girls walked in I chopped the onions and tomato for the salmon, forgetting that I had to thinly slice them. I wasn’t going for aesthetics (lies) but cursed myself for the one simple step I actually had control over and still didn’t do. This curry might be going the way of May’s dandelion green disaster.

But it worked. It worked beautifully. The labadar was mild and creamy and the fish was fragrant and had just enough heat to flush your cheeks. You could eliminate the dried red chilli if your guests are sensitive, but mine weren’t scared. The salmon worked, it worked really well, but I’m anxious to try a fish that’s not quite so rich that will compliment the heaviness of the coconut milk. It’s not as heavy as cream obviously, but I think salmon is better left a little simpler, not so dressy (this is, however, coming from the girl who cooked a salmon fillet a while ago in bacon and rosemary). You know what I mean. Try it with the trout. Try it with the chestnuts. And for the love and honour, try it with the fenugreek seeds and let me know what I’m missing.