Yes, that’s how exciting it was. A hike and a fire for week 24 of the little red fire chicken (oooh, clever). We took it out to the woods. Or into the woods and out on the beach, really. An hour and a half hike down the coast past some of the most breathtaking scenery in Newfoundland…a whole gaggle of us, like a row of ducklings walking down the beach.

A lot of Newfoundlanders and Labradorians were reared up on toutons…leftover bread dough fried up and usually slathered in molasses. We were more of a bannock family. I don’t know if that was the Labrador influence, or the fact that Pop would make it in the woods all the time, but whatever the case was, Mom would make batches of it, not out in the woods but in the kitchen, in a frying pan on the stovetop. It was easy, great for any time of day, and most importantly it kept the three kids quiet and stuffing our faces for a while. Because as excellent as pancakes were for supper, bannock was even better. I’d cut a big fluffy bannock in half, spread both pieces in butter, top one with peanut butter and the other with molasses and make a good sticky mess of myself. 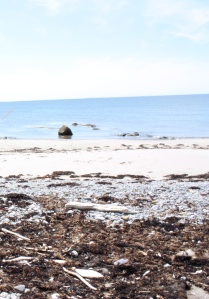 These past few years in Cow Head I’ve started making bannock for boil-ups and hikes. Everything tastes better cooked over a fire and because bannock is a type of bread you can make on the spot in the middle of nowhere, it’s hard to find a better food to cook out in the woods. I’m sure the traditional Native Canadian and Scottish recipes vary, but the ingredients are roughly as follows: 4 cups flour, 3 teaspoons baking powder and salt to taste. I halved the recipe to take on this particular hike because I didn’t have the room in my backpack for the full batch. Most times I’ll do up a big mixture and leave it in a closed container in my kitchen. When I’m packing up for a hike, I’ll scoop up some in a small tupperware or plastic baggie and…poof. Just add fire and water for magic bread in the woods. Whole wheat flour is a possibility, I’ve had it made that way and it’s good. But I prefer white flour outdoors….I don’t know why, it just seems weird and anti-ancestor to use any other flour over a fire. Like ordering whole-wheat pasta in Italy. Plus I can hear Pop from somewhere up there saying “whole wheat flour for bannock, don’t you be so goddamn foolish.” 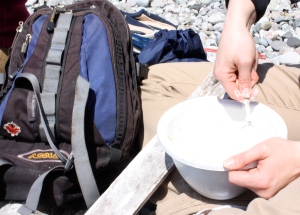 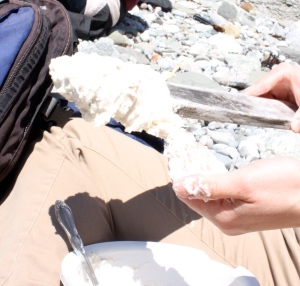 I don’t know how Mom will feel about what I did with this particular batch of bannock, but I needed to make a new recipe and I wanted to do it in the woods. The night before the hike I made the bannock flour mixture and added some finely chopped fresh rosemary. Because I’m a little obsessed with bacon and rosemary on my roast chickens, I thought it would be an exciting experiment. With cheese. Lots of cheese.

The trick with bannock is to add enough water to make a softish dough. It can’t be too floury or it’ll be tough, and it can’t be too soft or it’ll fall off the stick and into the fire before it has time to set. Add your water accordingly, you’ll get what I mean. Half the battle is finding the right bannock stick, long, broad and flat. If you lump the dough thickly around a regular stick, it’ll fall off, or take ages to cook. If it’s spread evenly around a flat board-type stick, you’ll have a better chance of golden, evenly cooked bannock. I’m so confident in my bannock-stick selecting, I’m pretty sure it’s the only thing I could beat Gordon Ramsay at. 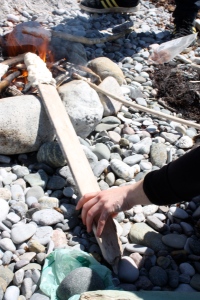 You know when you want a nice golden roasted marshmallow but you’re too impatient and you stick it in the fire and it ignites but you blow it out and eat it anyways? You can’t do that with bannock. If you’re not a patient person, don’t make it. Depending on how much you’re making and how awesome your bannock stick is, it could take anywhere from 20 to 30 minutes. Maybe more. You have to find the right spot on the fire, the fire can’t be too big and you can’t take your eyes away for a second. It’s easy to cook the top of the bannock, but then you have to wrangle the stick so that the bottom cooks without burning the top. The goal is to have it cooked evenly through, and not have a well-done outside, and a gooey mess on the inside. When someone asks me to make them a piece of bannock because it’s their first time and they don’t know how to do it, I tell them no. Making a perfect piece of bannock and having to give it away makes people resentful. Make your own, or roast a wiener. 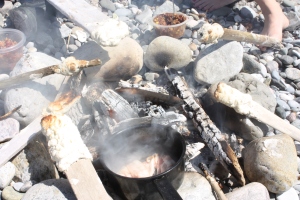 With that half batch we made a good four or five big pieces, plus a couple of smallish pieces for people who just wanted a taste. The bannock-virgins did fine (including Evan, who coined the cheesy and excellent title for this blog).  A few mildly burnt pieces, but nothing too serious. I took ages to cook mine because I am a food dork and I was excited about the rosemary experiment. I wanted it to be perfect and you know, look pretty in the photos. It took a good 40 minutes. 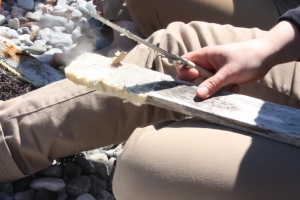 Done! Finally! I’m the most impatient person in the world, but why I have all the patience in the world for dough on a stick, I’ll never know. When you’re all golden and lovely and so’s your bannock, take a knife and slice it off the stick, minding the bits of wood that might be stuck in the cooked dough. You should have two evenly cooked pieces, hot in the middle and ready to be spread with butter, molasses, peanut butter, jam, nutella, whatever you like. Because I was doing a savoury-type deal with rosemary, I used butter and cheese, topped with a bit of bacon I had fried up on the fire.

3 thoughts on “MANIC FOR BANNOCK!!”