Three weeks, no new recipe. A recurring theme, I’m over it, moving on. A bit of a scramble but I managed to make three new recipes in the span of two days. One I made because I saw it on the WordPress homepage.  Baked Oatmeal jumped out at me and I had all the ingredients. Admittedly, I wasn’t too excited about it. There wasn’t a whole lot of butter and sugar in it and the only reason we make oatmeal is to make a lame attempt at being healthy while trying to make it taste like a cookie. 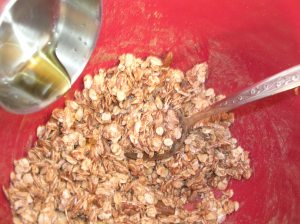 But this was really really good….and healthy! And I know healthy can be tasty, but lately I’ve been going a little cracked on the butter and cheese and I was prepared for a big let down. I modified the ingredients a little, and halved it because I was making it for just me and my dad. When he came over I said “It’s a new recipe, it’s for the blog, it’s supposed to be healthy, sorry if it tastes like crap.” We then proceeded to eat half the pan in one sitting with big mugs of tea. 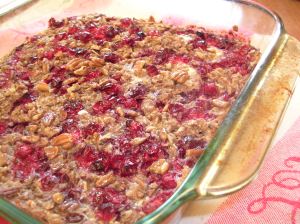 This comes from Janae Monir’s gorgeous blog and she got the recipe from Heidi Swanson’s new cookbook, Super Natural Every Day: Well-loved Recipes from My Natural Foods Kitchen. Quite a mouthful, but if this recipe is any indication, healthy isn’t so bad half the time. 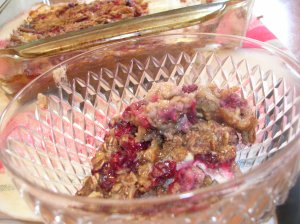 Ran out of dad’s hand-picked blueberries in the freezer so I used his partridgeberries. Really tart, but I get my taste buds from dad and he’s not afraid of partridgeberries either. I went full on with the butter and maple syrup, although there are a few steps you can skip if you’re watching things. But I’m of the belief that if it’s real butter and maple syrup and not processed sugar and margarine, it’s just better for your heart. In a different way. I had some soy milk that needed to go so I used that instead of regular milk. Worked like a charm.

The next day! Brunch! Another one. Vegetarian-friendly and with Prosecco and my favourite ladies, naturally. It may have beat the last one. The jury’s still out…

Two new recipes: Sherried cheese toasts from The Great Big Butter Cookbook (again) and Raspberry ricotta pancakes from Nigel Slater’s The Kitchen Diaries (again). Did the cheese toasts with a green salad and I guess the pancakes were like a dessert. Not too sweet but fluffy and buttery and perfect. I know I went on about Nigel’s brownies, and now I will go on about these pancakes. They have ruined me. And as I catch up on blog entries from my new home for the summer on Newfoundland’s great Nothern Peninsula, the only thing I’m lamenting is the lack of ricotta cheese at the store. Wow. I never thought I’d use the word ‘lamenting’ and ‘ricotta cheese’ in the same sentence. 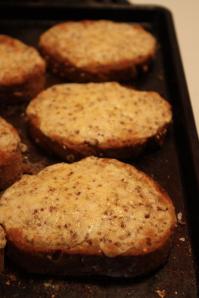 Preheat the broiler. Combine the mozzarella cheese, butter, mustard, and hot pepper sauce. Using an electric mixer, beat at a low speed until well-mixed. Gradually add the sherry, beating until well-combined. Spread onto toasted bread slices, covering the entire surface of each slice. Place on a baking sheet and broil 4-5 inches from the heat for about 2-3 minutes or until cheese mixture is bubbly and golden brown.

Don’t let the weird ingredients scare you. I’m all over sherry in cooking and was intrigued more than anything. I think you could experiment with the bread…I used a dense multi-grain from the bakery at Sobey’s.  Pretty heavy ingredients, but nice and light when it boils down to it. Broils down to it. Yep. I said it. 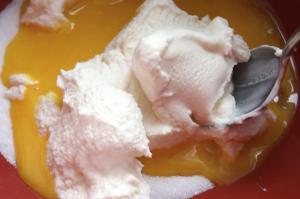 In a large bowl, mix the ricotta, caster sugar and egg yolks. Grate the orange zest into the bowl and stir it in gently with the melted butter. Sift in the flour and tenderly fold in (oh, Nigel). In a large bowl, beat the egg whites with a balloon whisk till stiff, then fold them lightly into the ricotta. It is important not to knock the air out. Carefully fold in the raspberries. 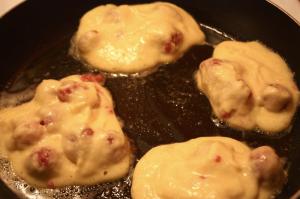 Warm a non-stick frying pan over a moderate heat and brush it with a little butter. Place a heaped tablespoon of mixture in the pan, then another two or three depending on the size of your pan. Let them cook for a minute or two, till they have risen somewhat and the underside has coloured appetisingly (I didn’t even know that was a word Nigel), then, using a palette knife, flip them over to cook the other side. Do this as if you mean it, otherwise they will collapse as you turn them (true, learned the hard way). A further couple of minutes’ cooking then serve immediately, hot from the pan. Makes 8.

The best pancakes I have ever made. Hands down. Make these pancakes, Make these pancakes after you have made those brownies from last week. Double the recipe, there will never be enough.  There might not be any ricotta cheese in Cow Head, but in a few short weeks there will be wild raspberries, strawberries, dewberries and, a little later on in the summer, bakeapples, crowberries and blueberries. They will be picked by myself and anyone else who would like a feed of pancakes. They will be folded lovingly (and tenderly) into a batter and cooked in butter and drizzled with Canadian maple syrup and it will be a very, very good summer.