Week twelve on the road. My first new recipe of the year in a completely different city…Montreal. And I can say with certainty, that in my travels in Canada over the years, it’s my favourite city to eat in. There’s the obvious…Montreal’s huge ethnic community, the European feel to the whole place. But all I know is that the slightly alarming theme to my week was a sadness when I got full because I couldn’t wait to get hungry again. I ate so much I completely sabotaged my shopping plans. I spent an afternoon trying on clothes in H&M and when nothing fit I gave up and bought an apron with cupcakes on it across the street at Simon’s then went for Italian. From gorgeous little chocolate croissants to Vietnamese barbecue chicken noodle soup to smoked meat sandwiches and everything else in between, I ate like a crazy woman. I crammed in every food adventure I could, convincing myself with every bite that I had to return to Montreal, and that it had to be very very soon.

I was determined to try a new recipe, even though it was far too tempting to ditch the idea and eat out. I was staying with my friends Leah and Robert and we took a trip to the Jean-Talon Market to poke around and see what we could find for supper and to visit our friend Diana who worked there, and who would be joining us later that night to eat.  After lunch at a Mexican place (unapologetically casual, the food was perfect) we headed into the heart of the market and I proceeded to have an overloaded sensory experience. My mouth was agape for most of the afternoon. As much as I adore St. John’s, if there was somewhere to buy Middle Eastern pastries, I’d be a slightly happier camper to say the least. So I fell in love with the place and wandered around in amazement, and we finally decided to buy a bunch of olives, cheeses, baguettes and some specialty sausages from one of the butcher shops. We knew we’d be full from the Mexican for a while, so a late supper of sausages and smashed potatoes with a few bottles of white would be the plan for the evening. And we bought a lemon meringue pie from one of the bakeries, because I knew after all that wine I wouldn’t be fit to make dessert. 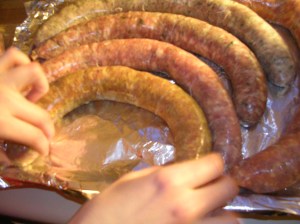 The display of sausages was baffling. There’s something you don’t get to say every day. But it really was a baffling display of sausages. The shop had a special on…eight sausages for the price of six. And these weren’t your run of the mill, five in a pack type you get at Sobey’s. These things were huge. The place was packed and we had to choose quickly, so we went with our guts and chose the eight flavours that jumped out at us: tomato and basil, Provencale, apricot, maple apple, blue cheese, Oriental, lamb, and to keep things a little light, Gruyere and bacon. All made with love by local butchers and with farm fresh meat. 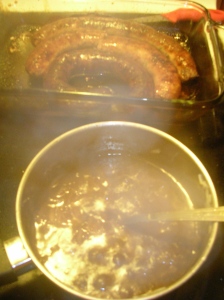 One bottle of white and some bread, cheese and olives later, it was time for some sausage and smash. Pretty simple, really. There wasn’t enough room to fry them up in a pan on the stove, so all the sausages went in a couple of big pans with enough water that they wouldn’t dry out while roasting. Also threw in a head of garlic drizzled in olive oil and wrapped in foil to roast for the smashed potatoes… 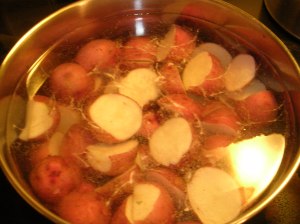 I think the difference in smashed and mashed is skins on and a little smashed together as opposed to peeled and mashed together and creamy. I could be wrong, but I like the sound of Sausage and Smash so that’s what it’ll be from now on for me. The idea of smashed potatoes is also appealing when you couldn’t be bothered to peel potatoes (after wine) or you’re in a hurry. We bought some really nice red ones, cut them in half, boiled them, and then tried to give ourselves premature heart disease by adding the following: generous amounts of butter, creme fraiche, and whipped cream cheese. 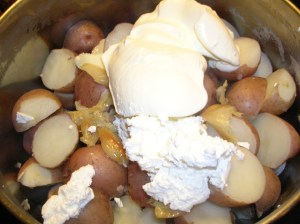 A last minute decision to make a sort of gravy (more like au jus, if you’re going to be picky about it) and we were good to go. I did up some thinly sliced onions in olive oil and balsamic, poured the roasting juices from the sausages in, and poof. An unnecessary but thoroughly enjoyable addition to an already decadent meal. Leah made a nice green salad on the side so we wouldn’t feel completely guilty and the meal was ready. Unreal. The perfect meal when you’re in no mood to feel guilt about what you’re eating. And lemon meringue pie on top of all that. We ate far too much, so much so that our plans for afternoon dim sum the next day went out the window. I was a little disappointed that I wasn’t hungry until four the next afternoon, but I eventually managed some Indian take out later that evening. Disaster avoided.

4 thoughts on “Sausage and Smash in Montreal”