Wow. I just said ‘improvised strudel’. So when I wrote about the roast chicken dinner I was cheating a little. It wasn’t a new recipe, but I felt it was my duty to share with the world the magic of slabs of bacon on a chicken. Now that I’ve hopefully set a few people on the right path, I’ll write about the dessert that followed supper, which was in fact a new recipe. When chicken time came I was scrambling a little for a dessert idea. I was supposed to trek through the snow to the grocery store to find ingredients for something new, but the afternoon snow turned into a mini-blizzard so I poked around in my freezer to see what I could find. What turned up was leftover phyllo pastry and some frozen berries. My dad is a champion berry picker (not kidding, he has trophies. Ok, kidding) so my deepfreeze is usually stogged with perfect, wild, pesticide-free blueberries, partridgeberries and bakeapples. Blueberries, lingonberries and cloudberries to those of you reading who might be from away. I thought of my friend Darka who’s from Slovenia who makes gorgeous berry strudels, and this is what I came up with. I’m pretty sure the filling could be used for crisps and pies. Will let you know.

1 cup partridgeberries (thawed if frozen)
1 cup blueberries (thawed if frozen)
1 granny smith apple, peeled and thinly sliced
1/2 teaspoon of cinnamon
1/3 cup brown sugar (1/2 cup for a slightly sweeter filling, if you’re afraid of the tartness of the partridgeberries. Don’t be scared)
Squeeze of lemon juice (optional, but if you’re prepping the filling in advance, this will prevent the apples from turning brown)
2 heaping tablespoons of sour cream. 3 if you’re feeling saucy.

I layered a few phyllo sheets brushed with melted butter, spread the filling, and a few more sheets layered on top, again, each individual sheet brushed with butter. Don’t use margarine, that would just be silly.

Phyllo is notorious for a being a huge pain in the ass. Because it’s so painfully thin, it dries out quickly so it needs to be covered at all times with a damp tea towel. You will curse, there may be tears, but when you get into the rhythm of it, you will feel like a rockstar.

I sprinkled it with sugar and cinnamon (making sure the top layer was generously slathered with the last of the melted butter), baked it somewhere around 350 until it was a lovely golden brown (half hour maybe?) and served it warm with ice cream. And none of this low-fat silliness. Full on French vanilla double churned stuff. Sweet and tart and light. Next time I’d like to try it with a homemade pastry. If it’s too snowy to get to the store for phyllo, that is. 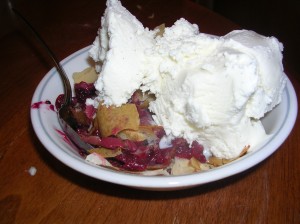 2 thoughts on “An improvised strudel…”