Not two completely new recipes this week, admittedly. I’d tried the Cantonese lemon chicken a few years back and arsed it up so I thought another crack at it would be nice. The Chinese vegetables I’d never tried before and this choice was inspired by my friend Lisa. We were living in Cow Head this past summer with not a whole lot of fresh produce to be found. Her sister flew in from Toronto for a visit and brought with her some Chinese greens, fresh from a market in Toronto. Lisa prepared a feast for us, the likes of which I’m sure Cow Head hadn’t seen until then. So with Lisa in mind I decided to make a dish that was somewhat similar, bracing myself for what Sobey’s had to offer on a Friday evening. Bok choy! And Chinese broccoli! Okay, it was Swiss chard. It was green, I got excited. I grew up in Labrador and didn’t know what real garlic was until I was eighteen. Lisa, if you’re reading this, it’s the only excuse I have. Anyways, apparently you can stir fry Swiss chard in garlic and oil, so there you have it, it can work. It did work! Both these recipes came from one of my kitchen bibles, The Essential Asian Cookbook, published by Whitecap Books in 1997.

Bring a large pan of water to the boil. Wash Chinese greens. Remove any tough leaves and trim stems. Chop greens into three equal portions. Add the greens to the pan of boiling water. Cook for 1 to 2 minutes, or until just tender but still crisp. Use tongs to remove greens from the pan, drain well and place on a heated serving platter. heat the peanut oil in a small pan and cook the garlic briefly. Add the oyster sauce, sugar, water and sesame oil and bring to the boil. Pour over the greens and toss to coat. Serve immediately.

Note: Use choy sum, bok choy or Chinese broccoli (not Swiss chard. Does not resemble Chinese broccoli in any way unless you grew up in Labrador and had no idea what an avocado was until that time you went to France when you were sixteen and thought it was so weird that a fruit could be greasy).

Cut the chicken into long strips, about 1 cm (1/2 inch) wide, and then set aside. Combine the egg, water, soy sauce, sherry and cornflour in a small bowl and mix until smooth. Pour the egg mixture over the chicken, mixing well, and then set aside for 10 minutes. Sift the extra cornflour and plain flour together onto a plate. Roll each piece of chicken in the flour, coating each piece evenly, and shake off excess. Place the chicken in a single layer on a plate ready to be fried.

Heat the oil for deep-frying in a wok or pan. It is hot enough to use when a cube of bread turns brown in it in 30 seconds. Carefully lower about four pieces of chicken into the oil and cook until golden brown. Remove the chicken with a slotted spoon and drain it on paper towels. Repeat with the remaining chicken. Let the chicken stand while preparing the sauce.

To make the lemon sauce, combine the lemon juice, water, sugar and sherry in a small pan. Bring to the boil over medium heat, stirring until the sugar dissolves. Stir the cornflour into the extra tablespoon water and mix to a smooth paste; add it to the lemon juice mixture, stirring constantly until the sauce boils and thickens. Set the sauce aside.

Just before serving, reheat the oil in the wok to very hot; add all the chicken pieces and fry for 2 minutes until very crisp and a rich golden brown. Remove the chicken with a slotted spoon and drain well on paper towels. Pile the chicken onto a serving plate, drizzle over the sauce, sprinkle with spring onion and serve immediately.

Note: The first frying can be done several hours in advance.

Everything generally went according to plan.  I like my lemon chicken very saucy so I doubled the batch of lemon sauce, probably could have tripled it.  There wasn’t really any drizzling, we just tossed the cooked chicken in with the sauce and gave it a stir.  We decided not to double fry the chicken mostly because we knew we couldn’t really duplicate the fast and furious skills of true Chinese cooking without a gas stove.  I lament the fact that I don’t have one every time I cook Chinese or Thai.  The little red kitchen doesn’t have one and neither does the little green kitchen at my friend Melanie’s place, where we cooked our Friday night Chinese.  Everything’s meant to be done so quickly, but there was no proper gas stove, no proper wok and we were tired after a long week.  But the wine was good and so was the company.  The meal was fantastic.  And while I work on my Chinese cooking skills (something I think takes years to perfect),  the greens may be a little overdone, the chicken may not be furiously double-fried, but the eating will be very, very good. 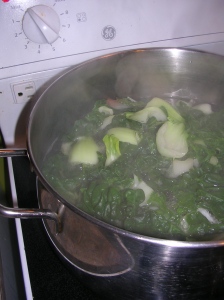