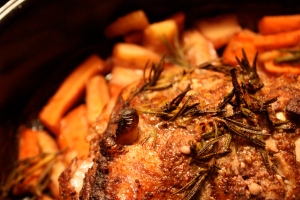 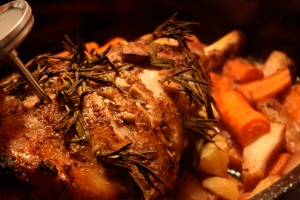 My first attempt at a roast leg of lamb. My first attempt at lamb, period. Shocking. I was suitably terrified because I had four very dear friends coming over so I asked for advice from everyone I knew who ate lamb, watched all those silly videos on youtube, took a deep breath and the result was more than pleasing. The Boursin mashed potatoes didn’t hurt either.

I never believed it would be so easy, but you really can throw it all in a roasting pan. I trimmed a bit of meat off the end of the leg…for looks, and to make it easier for carving at the table, so they say. But mostly to make a nice stock for the gravy, really. I tossed the leg meat (that sounds weird) in a pot of water with some bay leaves and got to work on the lamb. I cut lots of little slits all around the leg and rubbed the whole thing with fresh lemon juice, olive oil, worcestershire sauce and dijon mustard. Tucked cloves of garlic and sprigs of rosemary into the slits and placed the leg of lamb in a roaster on a bed of carrots and parsnips, gave everything a drizzle of olive oil and red wine and crossed my fingers. About forty-five minutes on 425 then another hour and fifteen on 375. We maybe could have cut back the cooking time but one friend who came to the roast supper is preggers and we were going for meat that was well done. As it turned out, it didn’t seem to matter. The leg carved up beautifully and the veggies were all roasty and golden and had soaked up all the flavour of everything.

I could have thrown the potatoes in the roaster as well, but I had a package of Boursin herb and garlic cheese in my fridge and decided to experiment a little. Peeled and boiled ten or so organic red potatoes, then mashed them with a half of a stick of butter, salt and pepper, some milk, and half the package of Boursin. I thought about it for three seconds and realized that I’d probably end up eating the other half on toast for breakfast so I tossed the rest in. Creamy and smooth and garlicky and perfect.

I added a bouillon cube and a (very generous) slosh of red wine to the stock, thickened it with a bit of cornstarch and we were ready to eat. Didi brought a jar of her mom’s homemade apple mint jelly to top everything off.

Relief. And plans in the making for leg of lamb number two. One Sunday a month might be nice.

3 thoughts on “Week three: A leg of lamb supper”

Leave a Reply to Sheena B Cancel reply